HomeБаскетбол“Alike as two drops of water.” Sabonis brought an heir, who is not exactly a shame 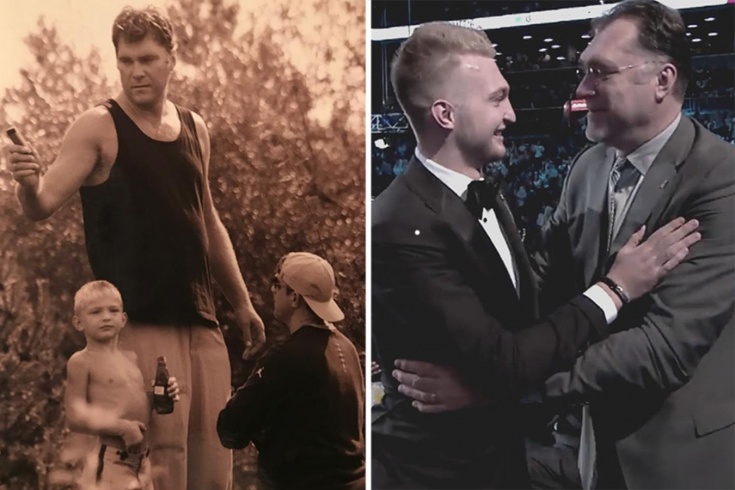 Arvydas Sabonis is in excess needs no introduction. His name is familiar even to those who are not particularly interested in basketball. Lithuanian center made his debut in the USSR championship in 16 years. Since to the end of the career of Sabas has been one of the best at his position not only in Europe but in the world. At the age of 17 he already played in the senior team of the Union under the leadership of the legendary Alexander Gomelsky. I was a little too young, but some contribution to winning gold medals in the world Cup 1982 in Columbia did. After 4 years of ripe Sabonis has become the clear leader of the USSR team. Arvydas is one of the main creators of the historical comeback of the Soviet basketball players in the semi-finals of the 1986 world Cup against Yugoslavia (91:90).

Sabonis helped Zalgiris to win three consecutive title of the champion of the USSR (1985-1987), which is an incredible achievement against the total hegemony of CSKA in the collection of “soldiers” 16 of 17 titles before the first triumph of the Lithuanian club. Next, Sabas won gold at the Olympics in 1988 in Seoul and went to conquer foreign spaces. Started with Spain, having played six years in the “Valladolid” and Madrid “Real”. To NBA Sabonis got already quite old for an athlete age is 30 years. However this in no way prevented him from successfully prove themselves in the League overseas in the “Portland trail Blazers” to 12.0 points and 7.3 rebounds, 2.1 assists and 1.1 blocked shots average over the 7 seasons. Sabonis achieved a lot on the court, but his basketball legacy is not limited. The Arvydas four children – three son, Domantas, Tautvydas, leader, and daughter Ausrine. 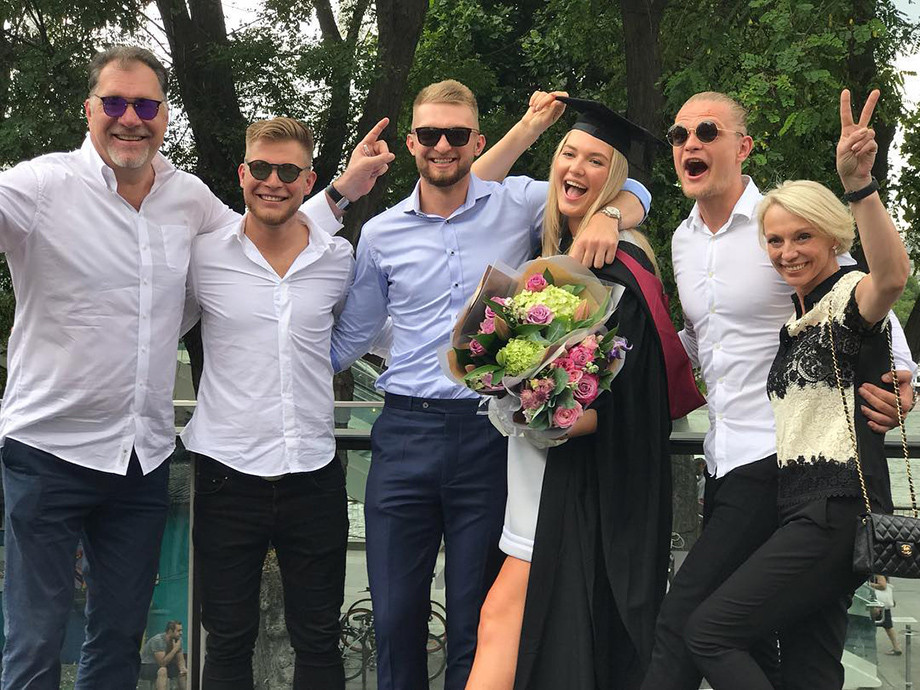 All the sons tried to follow in the footsteps of his father. The leader and Tautvydas to achieve some success in basketball did not happen. Tautvydas ended his career at 27 years old, and the situation is in an even earlier age. Arvydas old interview admitted that most of the potential he sees in the younger son, Domantas. He was not wrong.

In this video, almost a quarter-century ago Arvydas Sabonis holds in his hands a newborn son, Domantas. Domantas was born 3 may 1996 in Portland, where at that time the local team “trail Blazers” were his father. In the spring of of 1996
Arvydas was the 32nd year. In the video he takes out of the hands of the nurse of the child and carefully carries the little Domantas to his wife Ingrida. Wife of Arvydas Ingrida Mikelionyte in 1988, received the award “Miss Vilnius”, and in 1990, young married in Kaunas.

In 2020, the 23-year-old power forward “Indiana” Domantas Sabonis took part in the all-star game NBA is an achievement that should not obey even his illustrious father. To attend this event in Chicago the whole family gathered Siboniso. 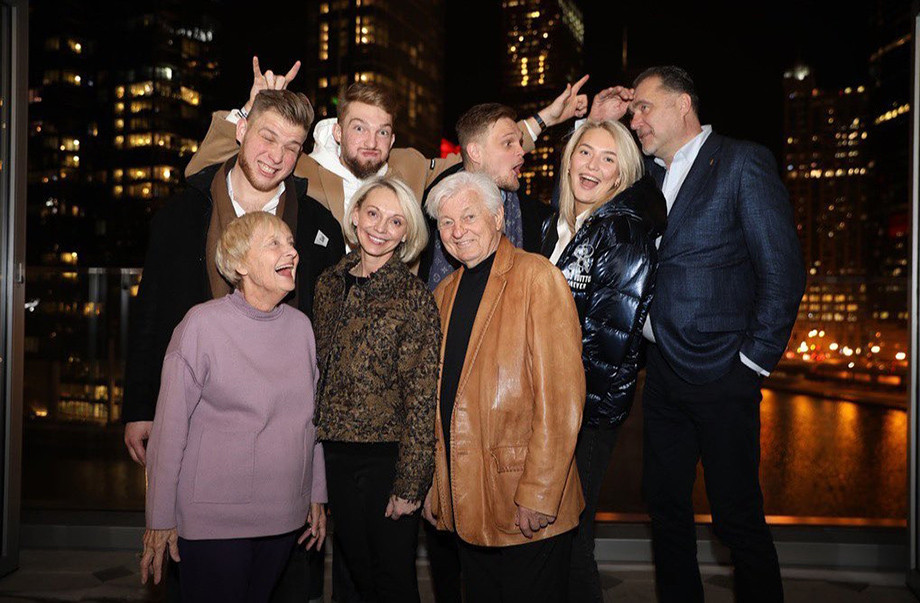 Career of Domantas Sabonis is only beginning to gain momentum, but he already has the title of the highest-paid athlete in the history of Lithuania. Before the start of the season 2019/2020 Sabonis Jr. signed with the “Pacers” contract for four years, during which it is guaranteed will receive $ 77 million and Another $ 8 million is provided as a possible bonus. Enclosed by Domantas Sboniso the contract became the largest in the history of the Baltic countries. For comparison: Jonas Valanciunas, the second Lithuanian in the NBA, in “Memphis Grizzlies” over the next three years will receive $ 45 million Arvydas seven years in the NBA earned “only” $ 47.8 million Should make allowances for inflation and take into account the rising salary cap, but the fact remains — Domantas career is developing just fine. This year Sabonis Jr. got into the reserves for the all-star game. Who knows, maybe in a few years forward grow to the starting lineup?

The preconditions for this more than powerful. January 20 this year Domantas Sabonis for the first time in his career he managed to register a triple-double. In the match against “Denver nuggets” he scored 22 points, 15 rebounds and 10 assists. Arvydas never done. Sabas was a great passer for a center, but while playing in the NBA gave high 9 assists.

This season, Domantas scores average of 18.5 points, to 12.4 rebounds and 5.0 assists. He literally became a machine for the production of double-doubles. All of these indicators Domantas exceeds the figures of his father, Arvydas in his best year in the NBA. Sabonis is a senior in the season of 1997/1998 was marked 16 points, 10 rebounds and 3 assists.

Of course, we cannot say that Domantas better as a player Arvydas. Sabonis Sr., came to the NBA in the late age, past the Prime time. Prior to that, he has won literally everything possible at the international level. With the national team of the USSR Sabas took the gold of Eurobasket, the Olympics and the world Cup after the Soviet Union helped a tiny Lithuania to win two bronze medals of the Olympic games of 1992 and 1996. Yes, to compare players from different eras is a thankless task. Just need to state the simple truth — Arvydas has every reason to be proud of his son.

Domantas early years, faced a lot of pressure because of the personality of his father. Still Sabonis, the son should “match level”. Arvydas did not force the children to play basketball, but rather wanted them to chose another kind of activity. But since we left on this path, openly pointed out their weaknesses. Only a strong man uses this as extra motivation and not disheartened. The same situation is retired from basketball in the construction business (Arvydas was very happy) due to the fact that he could not endure the constant comparisons with his father psychologically and could not stand the status of “son of Sabonis”. Domantas not like that. He was born for sports. Sabonis Jr. did not succumb to the pressure of others. Among other things, he survived criticism of his father.

“For some kinship with the well-known player is a heavy burden because we all had high hopes for you. The fans look at you and require you to accomplish something. People expect you to do the same as the father. When something fails, they call you a loser, not a very good player or just shout that you are on the court because of his father. I never took too close, though often performed well when the father came to my games.

Father believed in me, but pointed out what I was doing wrong. For example, he said I was too soft when you drive to the basket and need to play tougher. Like you style of play? Personally, I don’t see any resemblance, although relatives and friends who grew up watching the performance of Arvydas Sabonis, in unison told that we are alike as two drops of water. It sounds crazy,” said Domantas.

Arvydas Sabonis appreciates the success of his son. It is particularly stressed that it is impossible to relax. Only in this case, Domantas will continue to progress. “Very proud of Domantas. I wish him the best. To avoid any injuries (Arvydas suffered from problems with the knee, ankle and groin for the better part of a career and understands the consequences of the damage. — Approx. ed.). In basketball you need to work, work and work again, you can never stop. Then all will be well”, — says the legendary basketball player.