HomeХоккейAll pairs playoffs the NHL. “Tampa” in the pursuit of revenge, “Washington” against the former coach 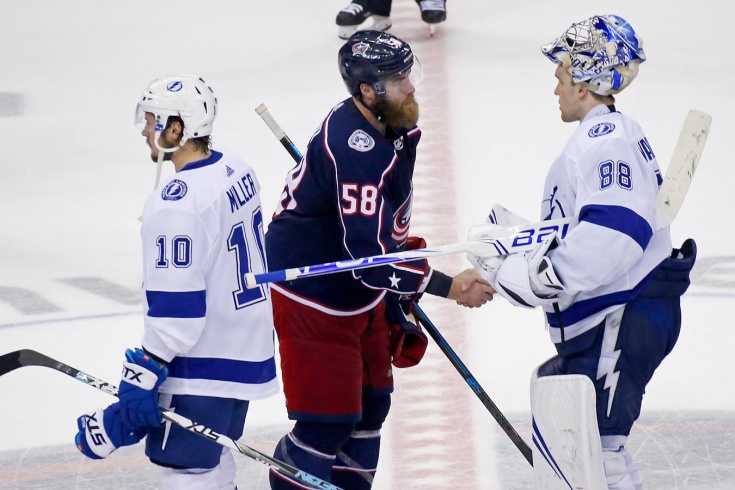 The NHL ended the qualification round of the playoffs. In the mini-tournament the best teams in the conference to end the regular season leaders of the West and East have got crops, and in round play-in winners are eight members of the 1/8 finals of the Stanley Cup. As expected, there were no surprises, and now we are waiting for is the natural of the playoffs. Briefly tell about all cylinders in the quarterfinals of the conference.

The Golden knights out of Las Vegas continue to surprise. In the third year of its existence, the team, the backbone of which was collected in the summer of 2017 George McPhee mostly of downed pilots, again coming in the playoffs of the Stanley Cup, secured the role of permanent favorites of the conference. This time Vegas finished the regular season in third place, but in a circular stage, won all their matches and won the first seeding in the West. The “knights” have a good pair of goalies (Lehner and Fleury), drop attack, and the coaching system Peter Deboraallowing “Vegas” to feel comfortable in the match against almost any opponent and often play from a position of strength. So, in a round-Robin stage of the “knights” beat and strong, “Colorado”, and the current champion “St. Louis”, which allows you to “Vegas” in a good mood to enter the playoffs.

The opponents of the “knights” — “Chicago”. In the “Blackhawks” very few people put in the series play-in from “Edmonton”, but the “black hawks” have once again proved that experience and kobavashi team talks a lot in matches in the shootout. “Chicago” suddenly bright played in the attack and, by and large, has broken the “oilers” with their own weapons. “Oil” is not saved a phenomenal performance of their leader Connor McDavidand ruined disgusting defensively and on the last turn. Of course, “Vegas” is not “Edmonton”. “Knights” is stronger in character and in the balance of the composition, and in the construction of the game. But in this pair of “Chicago” will be a more experienced team, so to put “Vegas” in a clear favorite should not be.

The “Colorado” now you have to qualify for the Stanley Cup. Slaughter the first three, good depth of attack, strong goalkeepers, one of the best defenses in the NHL. And yet – the enormous self-confidence.

This team is ready to win, any defeat (even though it is the loss of the first seeding in the West “Vegas”) and her angry, makes you stronger. The first barrier in the way of “avalanches” — “AZ”. Another mini-sensation the preliminary round, but if you look, the success of “coyotes” is not surprising. Very balanced, disciplined and coaching team where there are experienced guys (Kessel, Richardson, Stepan), and diligent young people, and local stars, infrequently penetrated in his career before important Cup games and therefore eager to show their maximum (Ekman-Larsson, Hall). Plus in qualifying with “Nashville” great dragged Darcy Kemper.

Of course, Arizona is a toughie. Battle of the “Colorado” will become a confrontation between two perfected systems and good defense. I think there will not be many goals, mistakes and a kind of madness. But the favorite of the series, of course, be “avalanche”, whose talent in the attack is still more.

The current holder of the Stanley Cup isn’t performed on a circular stage. “St. Louis” has suffered three defeats, losing in the viscous battles with Dallas, Colorado, and in vigorous pursuit of goal-scoring with “Vegas”. It is clear that these matches are nothing really solved, but the “Blues” now less like the team far in the playoffs. About the title defense yet and does not speak.

However, in the quarterfinals of the “St. Louis” not the most formidable opponent. From “Vancouver” many talented young people, ambition and the Cup of starvation, but these factors do not always work in the Stanley Cup. In Blues there is someone cool rush “orcas” and impose “Vancouver” their football, and the offensive players have “St. Louis” should be OK. This applies to recover from the trauma of Tarasenko, and O Reillyand the Platform and the other guys haven’t forgotten champion the emotions of last summer.

“Stars” is also neither good, nor bad held circular stage, winning the only victory over “St. Louis” in the shootout. The matches with “Vegas” and “Colorado” got a lot of questions about the functional and emotional readiness “Dallas” to the Cup battles. The “stars” were invisible leaders, team play is also not impressive.

Now it seems that “Dallas” can be a big problem in the first round. There awaits them a cheeky “calgary” with a bright attack and a healthy sporting aggression. “Lights” mentally and physically rendered “Winnipeg”, and is unlikely to capitulate before the next opponent, whoever they may be. By the way, in the regular championship “Dallas” and “calgary” were separated by just three points, so these teams quite a from one weight category, and right now, “flames” look a lot “hotter” than the opponent. However, the “Dallas” is a large domestic reserves and a good balance in the lines, so if the leaders of the “stars” will Wake up the weak rear “calgary” may not survive.

“Philadelphia” — is in order. Three solid and confident win over other leaders of the East showed that the Flyers are perfectly ready for the playoffs and are going to go far. Montreal, knocked out of the Stanley Cup bulky “Pittsburgh”, at first glance it seems an outsider in this tie, but we can’t know how far are willing to go “the Canadiens” in the playoffs. “Montreal” has experienced leaders and talented youth squad have “hubs”, of course, for larger Affairs. But another series with the favorite price and Co. may be sufficient, so Philadelphia will have to exert maximum effort to pass. “Montreal”, and other underdogs this season’s Stanley Cup, nothing to lose, conditions of the playoffs to a certain extent, equalizes the opportunities of the clubs, so the window for sensationalism has not exactly closed.

One of the most intriguing clashes of the first round of the playoffs. “Carolina” with a magnificent game of their young leaders became the best team in the play-in, but a long rest might cool the ardor of the “hurricane”. Boston, though, and lost all three matches of the circular stage, it remains a solid, powerful organization with very serious artists, many of whom have acquired an immense Cup experience.

Have Svechnikova, akho and the company will not be so much freedom on the ice, as in the series with “Rangers” to the “Boston” definitely not allow “Carolina” is always to dominate and keep control of the match. From “hurricane” will need character and patience, and the will to pass “bears”.

However, the “Hurricanes” still full of energy and emotion to his head to push the opponent. Boston, of course, will be able to fight back, but if the Bruins are not themselves successful in creating and scoring goals (as it was in “carousel”), the “Carolina” to break they will not succeed.

Another bright battle in the East. From “Washington” — a huge potential and the best sniper of the modern NHL always gives good chances of success, but the problem is that the “capitals” approach to the playoffs in a very mysterious condition. In the games of the circular stage, Ovechkin and Co have made it clear that they treat these matches as friendlies, but whether “capital” in a snap tune into these Cup battles?

The rival “Washington” is very serious. “Islanders” with Barry Trotz are famous for their system of defense and team discipline, this is a very tough nut to crack, which “capitals” can not get to the core, if their leaders won’t manage to gather an optimum form. “The islanders” already has had time to warm up to “Florida” and ready to fight on.

“Washington” can take this series due to its crazy attack, but you have to understand that if the forwards “capital” not good enough, the rear of the team is not the strongest. Goalie Holtby holds a controversial season, and a strong defense of the “KEPS” can not boast. The islanders can take advantage of, although are not a scoring team.

This series is a direct allusion to the playoffs last season. A year ago, “lightning” and “uniforms” also met in the quarterfinals of the East, and then all ended in a resounding defeat of the best team of the regular season. What has changed since then? From the “Columbus” left main stars (Bobrowski and Panarin), but the wards of John Tortorella did not become weaker. The first role out those who were behind the Russian leaders, and began to drag. “Columbus” is one of the best coaching teams in the NHL. It has no stars, but a lot of performance, desire and character. And, despite its apparent modesty, this team knows how to win in Cup battles. Bright “Toronto” is on vacation, on the order of “Tampa”?

“Lightning” should now show that we can learn from their mistakes. A year ago they did not have enough attitude, spirit and willpower, somewhere lulled the results of the regular season. Then the Tampa came to the first round of the fed and contented cat, and “Columbus” were going to fight. But now “lightning” knows what are the “uniforms” of Tortorella. And prior to this meeting, the circumstances do not have “Tampa” to relaxation. So, I’m sure there will be a real battle, but its result I not undertake to predict. On paper, “lightning” look stronger in all lines, but too much internal power there is in the players and the coach of the “Columbus” to call this team the underdog of the series.