HomeФутбол“And so you killed the team, why make fools of us!” Slutsky powerfully confronted the judges and the RFU

“And so you killed the team, why make fools of us!” Slutsky powerfully confronted the judges and the RFU 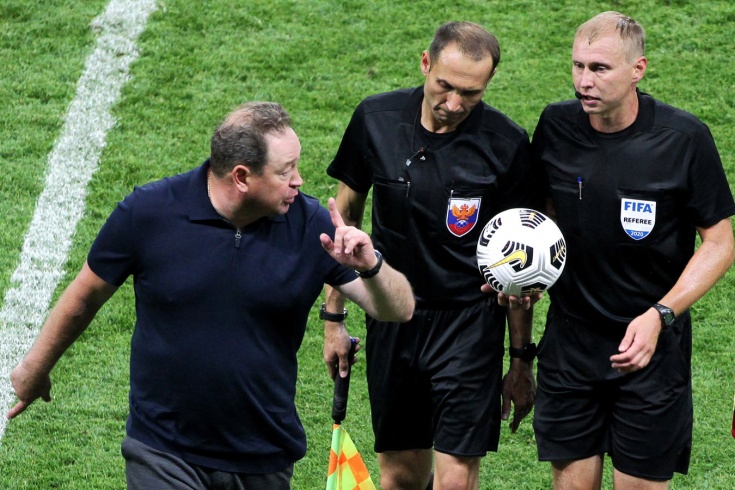 Every day of the new season RPL judicial scandal becomes more and more. On Sunday, the referees nachinalis against “Spartak” (this is the recognized head of the Department of refereeing RFU Viktor Kassai), and the owner of the red and white threatened to withdraw the team from the championship. It’s only been a day, and for discussions of the judges had one more reason – a controversial decision at this time was in the match “ruby” and “Locomotive”. We have to understand these episodes with the referee Igor Fedotov, but the story will be continued – at the post-match press conference with a fiery criticism of judges by the head coach of citizens of Kazan Leonid Slutsky. But got not only the judges.

First, the Slutsky criticized for VAR and Ivanov:

– Twenty times I watched the episode on 25 minutes, began Slutsky’s press conference, Ivanov claims that the 11-metre was not. I work as a coach for more than 30 years, in my opinion, this episode looks like a penalty – not even discussed. Red card to the Stadium – he was doing the movement and not the ball. What would have happened in Holland in this episode? The red card Stadium, penalty kick, yet the card… it is Clear that double punishment should not be, then everyone will say: “the Whole team needs to remove”. If he didn’t see the point in Ribose, I ask: “Why was nobody watching VAR?”. He says: “an Obvious point”. What point should be obvious? Someone can explain me?!

Then said Kaloshin tells all tales:

They gave VAR to help, and they interpret differently. I can not imagine that in Holland have not looked at an episode and not made the right decision. We Kaloshin says: “the Obvious solution here VAR doesn’t work.” VAR works in all cases! He tells us stories! I talked to Kuipers, who compared our judges — it’s like eight other planets who landed on our planet. And he tells me: “Yes, here look”. Why you have given VAR, if you don’t even look?! He watched the episode 20 times.

How to force judges to watch VAR? No way to get, there are rules. In Holland I worked with VARом two years: they watch all the episodes! Here even there were no – iron penalty and red card for the Stadium. I specifically say after the game send a video to Kuipers and ask his opinion on this episode. It is the judge who judges the final of the Champions League where I our judges had not seen for 200 years. I specifically asked for his opinion and the opinion of his colleagues. And then publish it and send the video.

— What kind of judge Ivanov who believes that wasn’t a penalty?! For me, fouled and Rybus and Guilherme. The only question is what the penalty after the penalty each player had to give. He just says, “Yes, there was a penalty”. Even begins to explain some things. It’s just a horror! Again, it is very difficult to comment on the game when she is so emotional. The day before yesterday was a mega scandal where it was appointed two penalties in gate “Spartaka”. In my opinion, there was no one even close! Even in this situation trying to get out and do something to explain…

Then the judges say: “People, come to your senses, what you write in social networks, what are you doing? We have families, children.” Well, you be people come up and say, “I was wrong, sorry, please.”

Turned to the Kassai and called for life to disqualify the arbitrator Ivanov:

– Before the season, we sent the paper requesting clarification of points. I was hoping to be at least some response. I specifically went convincingly showed the number of yellow cards, how decisions are made. But the answer is no. We sent a letter to the panel of arbitrators: “Come, tell me, you judge according to some rules that only you know! We like playing here, explain to us the rules!” In response to the silence.

How else to ask? Here’s how to ask? I ask now at the press conference the head of the judiciary Committee Kassai, he may assess: was a penalty or not? If the penalty was, then I demand that Ivanova was disqualified until the end of the season, and a better life, because he claims that there was no penalty. Despite the fact that more obvious penalty it is difficult to think when was fouled by two players of “Locomotive”.

– When you say black is white in categorical form, you do not agree with this and say enough harsh words. I admit that I uttered them, I did the idiot was justified. Imagine that I’ll shoot five people, and then begin to make excuses: “Guys, come on, this is not me, and they shot me! And then I wanted to Dodge, grabbed the gun and killed five.” Perhaps in response, people would ask: “what were You thinking?!” About as I said Ivanov.

If he admitted the mistake, I have had no issues. But he began to say that wasn’t a penalty. You’ve killed the team! Robbed us in the first game of possible points and everything else! Why continue to make fools of us and say that wasn’t a penalty?! If you see a white sign, and he says that she is black, then you need to come to a consensus. What else can we do?

The most important thing – people can be wrong. Today I made a million mistakes in some versions of the game, something else… But why did the judge not say that it is not recognized, for some reason drives me nuts. He sees the episode better than see millions. I don’t know what our referees that they somehow understand their skills or become a little more honest.

And even criticized the RFU because of penalties:

– First we say: “No masks”. Then fined in a sum and then passes again without masks. And so a month. And the situation for the coronavirus does not change: neither we, nor the world. If the mask is hanging on the ear – not a penalty, he shot goes fine. Explain this! You cost me a lot of money, more than half a million rubles, but you do not explain anything! What kind of raider takeovers of other people’s money?! I can’t understand, I have lost the habit and will to talk about it. Be silent and hold on to some things I’m not going. It is a disgrace, the shame, the horror.

Nikolic also commented on the refereeing. But he defended Ivanov.

– A surprise for me that the media are talking about judges and scandals, – said the chief coach of “Locomotive” in the football world, most importantly the players, fans, coaches, clubs. I looked at the situation with the fall of Ignatieff in the penalty on TV and I can say that this is not a penalty. It was a yellow card for the attacker. He hit Guilherme. I want to say that the judge is also a man, like you and me. They also make mistakes: sometimes against you, sometimes for you. But I agree that we should make a meeting with the coaches and clubs to clarify some points.