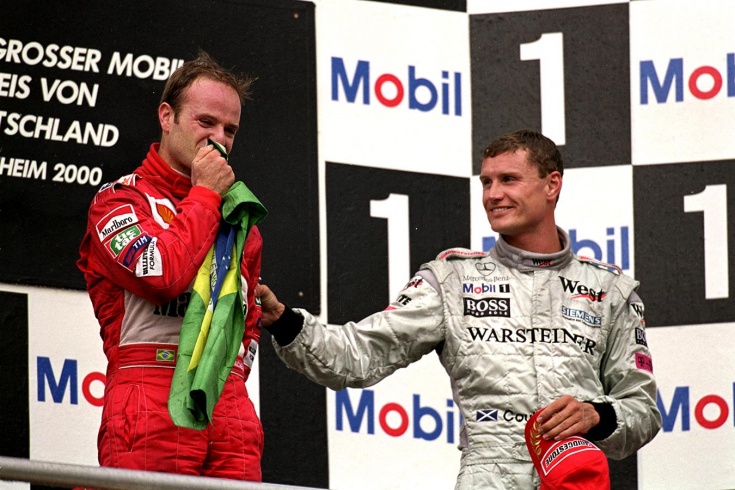 Grand Prix of Germany started for Rubens it’s the worst: at the beginning of qualification the car of the Brazilian was stopped because of an oil leak, and a spare Ferrari already took Michael Schumacher is his main twice at that time, the world champion broke in training for a couple of hours before.

The mechanics managed more or less to fix the victim on the morning of the car, and on a fairly wet track Barrichello managed to show only the 18th time. Pole position was won by David Coulthard, who chose the optimum moment to exit from the pits. Schumacher qualified second, and third place quite unexpectedly took Giancarlo Fisichella on the “Benetton”. Reigning champion Mika Hakkinen at the start, took fourth position. 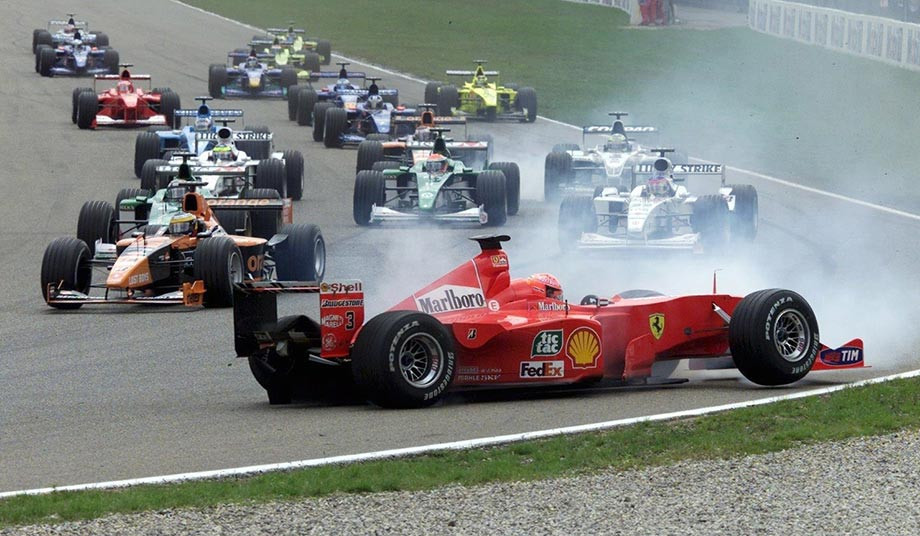 The first turn of the Grand Prix of Germany 2000

However, already from the first turn Finn stepped leader. Mika brilliantly reacted to the starting lights went out, while Coulthard went inside to block Schumacher. Michael DISI blocked, but being on the less favorable path, gave up the lead partner. Schumi didn’t give up and struggled tried to stay side by side with the “McLaren” Coulthard, expanding their line, and eventually bumped into Fisichella, smoothly moving along the edge of the track.

On the one hand, Michael threw himself on the Physical, on the other — Giancarlo saw that the front running Ferrari moves outwards and could throttle back. Anyway, both riders immediately out of the race. At the head of the peloton there are two “McLaren” on the third place broke “Jordan” Trulli.

With the gathering of Schumacher Barrichello was the only representative of the “Ferrari” on the track. The Brazilian started to take: “Williams” Button stalled on the grid, the Englishman stood the 16th — just before Rubens. Due to the free space ahead of Barrichello before the first corner played three positions, and by the end of the first lap was 10th.

The Brazilian others were ahead of rivals — Zonta, Villeneuve, Irvine, Verstappen and broke on the fifth line. Some time Rubens was catching up with Pedro de La Rosa, on the 12th lap and passed him, and on the 15th Doge “Jordan” Jarno Trulli for third of the race Barrichello broke from 18th place to third. 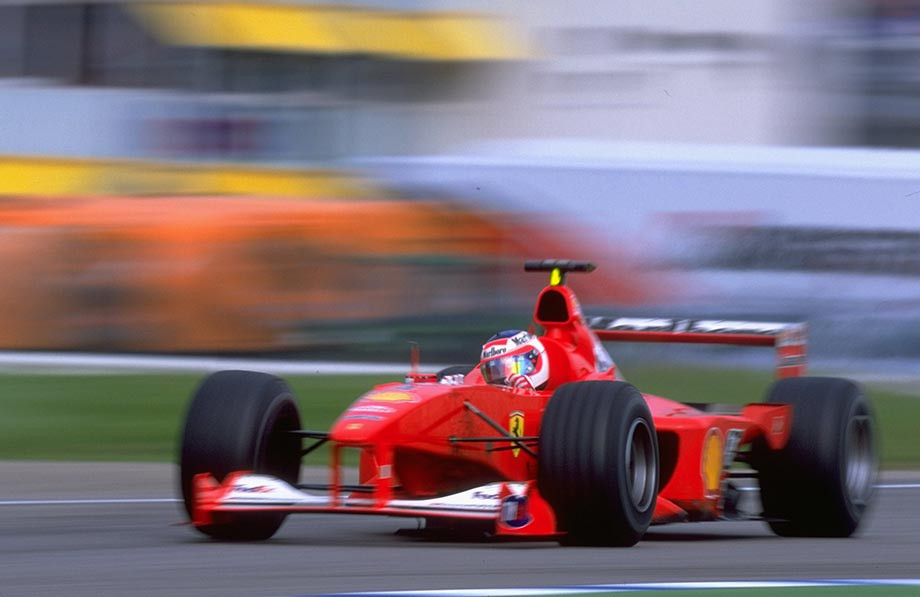 Rubens Barrichello at the Grand Prix of Germany 2000

The word “Jordan” had become the sensation of the race. The team brought in Hockenheim completely new chassis — EJ10B (the car even had to re-pass the crash test FIA!), and it looked very fast. If Trulli gradually lagged behind the “McLaren” and missed Barrichello, then Heinz-Harald Frentzen broke from 17th to fifth position and the pursuit of “Arrosage” and “Jaguars” put in the fastest laps of the race.

18-lap Barrichello went to refuel: when starting from the last of series “Ferrari” has relied on aggressive tactics with two pit stops, while the rest are expected to go the distance with one. On fresh tyres, Barrichello took Frentzen fastest lap and regained fourth place. Ahead still was Hakkinen and Coulthard, and the third place back behind them Trulli.

The picket on the track

At the 28th round of the track ran outside. The man in the white cloak somehow got on forbidden for the audience area, jumped over the fence and went for a walk straight on the road. The judges immediately released the track the safety car, but about three minutes later the offender walked along the pavement until he was removed by security.

Later it turned out that it was a 47-year-old Robert Sat from France. It is more than 20 years working in the factory of Mercedes in Le Mans, but was abruptly fired without explanation — the act, as explained later Sat down, he was trying to draw attention to the problem. He is not the first time we tried to break the track a month before it withdrew from the route protection of the Grand Prix of France.

Robert managed to solve their problems: a French court ordered Mercedes to pay him compensation in the amount of 91 thousand francs (about 14 thousand Euro), and at the same time fined for unauthorized access to the track for 600 pounds. Sat down after his antics even apologized: “I’m really sorry that I prevented Hakkinen from Coulthard — I didn’t even know that they are in the lead. I’m also a fan of Formula 1 and cheer for “McLaren-Mercedes” and would like to apologize for the problems that I have perpetrated”.

The race got really prevented “the McLaren”. Hakkinen had time to dive into the pits and keep the first place, but it is an impressive breakaway from the rest of the peloton, not counting Coulthard disappeared. DISI had to wait a whole round and from your pit stop, the Scot has left only six. The second line has risen Trulli, Barrichello once again was third.

It seemed that Coulthard will quickly recoup, but on the restart it was stuck in sixth place — was beyond “Jordan” Frentzen. Not helped by a second restart: Pedro Paolo Diniz before braking embossed Jean Alesi.

But on the restart perfectly reacted Mika Hakkinen. While Barrichello tried to pass Trulli, the Finn has established a comfortable lead in a couple of seconds on followed second consecutive victory. But with 10 laps to go on the route it was raining and very strong. “Hockenheim” to the reconstruction of 2001-2002 represented a giant high-speed track, the main part of which lay through the woods — this forest part of it had not rained, the asphalt was completely dry, while the entire “stadium” section poured rain. The track was very wet and completely dry at the same time.

Hakkinen and Trulli at the first opportunity turned for rain tires, while Barrichello, Coulthard and Frentzen stayed on the track and led the race. At the 38th DISI still swerves into the pits in the forest the Scots were not working the radio, so he immediately heard the order of the team. Meanwhile, Mika is confident ahead Frentzen in second place to Barrichello ten laps, and on wet pavement Hakkinen won back the leader for two or three seconds. 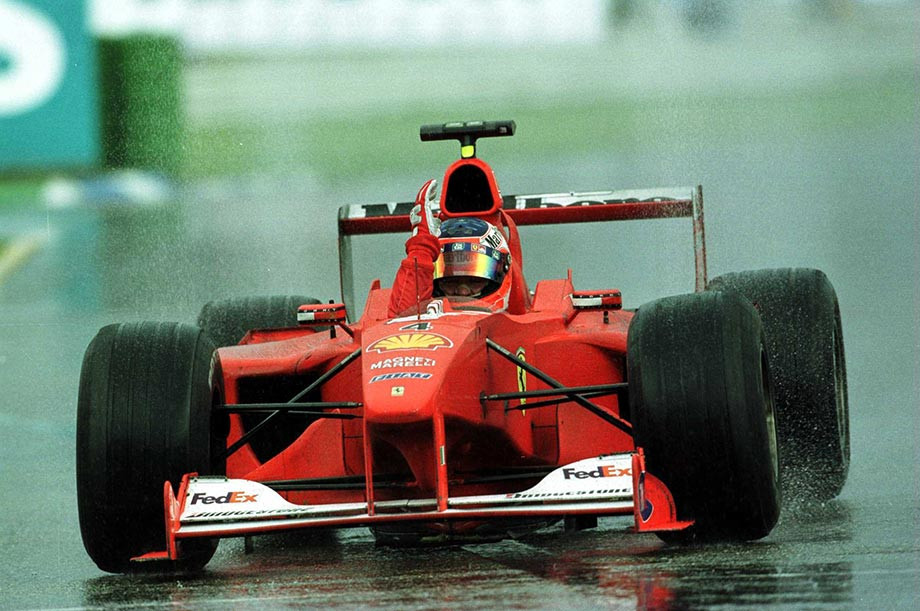 Rubens Barrichello at the Grand Prix of Germany 2010

However, those same two or three seconds Mika was losing on the dry part of the track — and at that moment the rain stopped. A few twists were very wet, but completely dry part of the track Ferrari Barrichello fully act lost earlier. Three laps before the finish, it became clear that the champion isn’t caught up with the Rubens — and in his 11th race for the “Scuderia” Barrichello scored his first victory. That day he became the sixth in the history of Brazilian driver who won the Grand Prix of Formula 1.

“On the last lap I was told that I win, and it was a hell of a long round — breathed at a press conference Rubens. — I decided to stay on the tire for dry asphalt, as felt on the straights and in the Eski so much faster.” 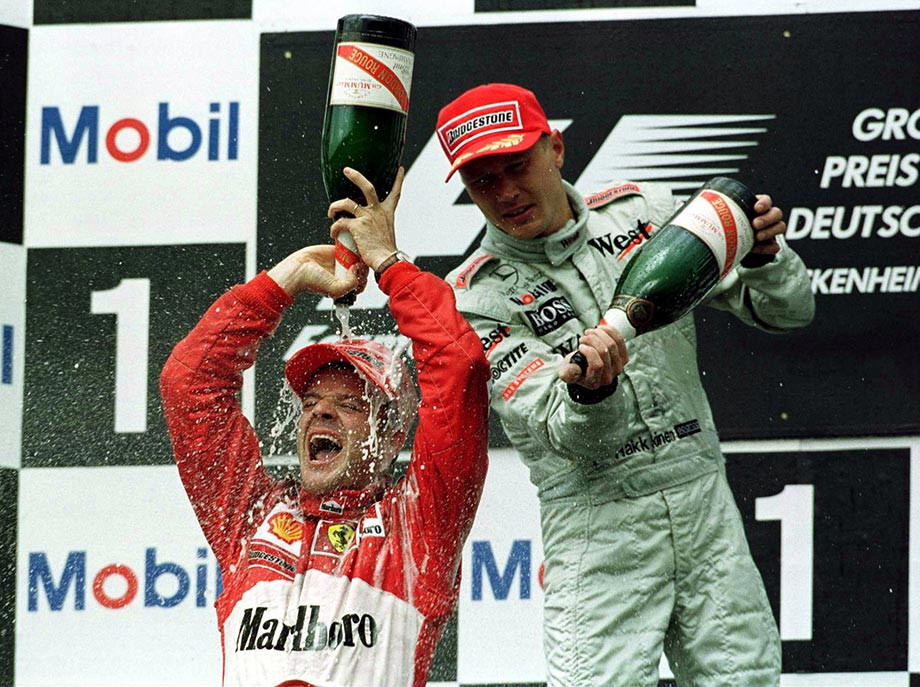 Hakkinen finished second and admitted that he paleotological when switched to the rain tires. However, the Finn was satisfied that reduced the backlog from in the lead in the championship to Schumacher meager two points. The third place was to get Frentzen, but for six laps before the finish refused transmission — EJ10B turned as fast as an unreliable car. Third place eventually went up Coulthard, and finished fourth of 20-year-old debutant Jenson button — it was his best result.

The 2000 season was Barrichello eighth in Formula 1 — at the end of the championship, he took fourth place. The Brazilian won’t win another year and a half, although in 2001 for the first time in his career, will become the season’s third and breakthrough will begin in 2002 to four wins and second place in the League, ahead of only Michael Schumacher.

Barrichello played for Ferrari until 2005 and brought the “Scuderia” nine wins in the race — not counting the huge contribution in the titles of Schumacher. In the mid-2000s Rubens will go to Honda where they will again be working with Ross brown — in 2009, under his command (and a sign “brown”) will win two more races. His last victory, the Brazilian has won in Monza in Italy, he in total has won three times.

In Formula 1, Barrichello played until 2011 and left with a still unsurpassed record for the most Grands Prix — 323. In may, Rubens Barrichello, turned 48 years — he continues to be in professional racing.