As the Troika Petrov “drew” goal “Montreal”. Cool combination of the Soviet legends 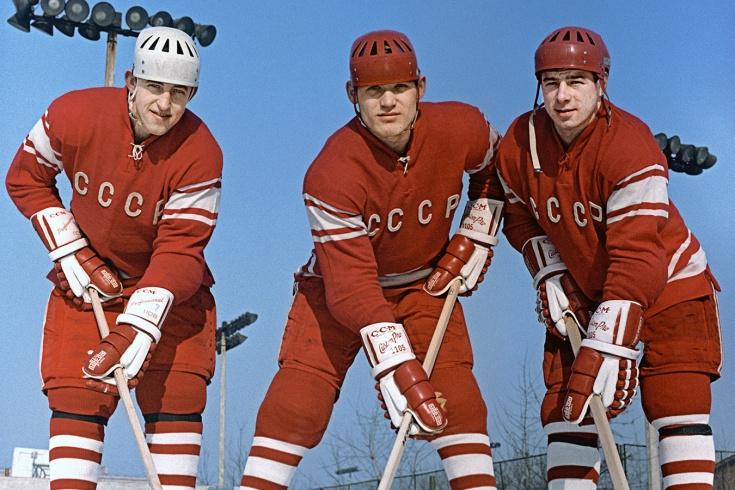 Mikhailov, Petrov and Kharlamov went down in history of hockey – perhaps the best trio in the history beloved by millions of sport. Soviet legends for many years forced opponents to throw in the towel, glorifying domestic hockey.

The legendary trio Mikhailov – Petrov – Kharlamov first came on the ice 30 Oct 1968 in Gorky match with “torpedo”. That meeting CSKA lost 0:1, not scoring any goals for the first time since the season 1962/1963. Who would have thought, a breakthrough is waiting for these forwards in the future.

It is noteworthy that Valery Kharlamov , along with Boris Mikhailov and Vladimir Petrov was invited to the national team of the USSR in two exhibition games with Canada. 6 Dec 1968, Valeri made his debut in the first match, and the next day played in the second. From these meetings the team of the USSR, there was a Troika, which said, say and will say always.

Partners felt each other, each of them had unique qualities. Kharlamov was distinguished by a unique stroke style, Petrov – ability to lead a power struggle and a compelling cast, and Mikhailov – game for the Nickel and goal-scoring flair. Therefore, each supplemented each was nothing more. For example, the famous goal by Valery Kharlamov, which we described in the previous text. So you can revise forever!

In official matches, the debut of the athletes came to the world championship in 1969 in Stockholm. The USSR team won gold, and the trio Mikhailov-Petrov-Kharlamov triple scored 21 goal.

Between the hockey players was a perfect understanding.

“We understand each other perfectly, and polobunny. I know they can take at any given moment, aware of their decision, even if they look somewhere in the other direction. More precisely, I don’t know so much, how many feel they will do in the next second, as will play in any given situation, and because at the same moment, rushing over to where puck is waiting for me where, by design partner, I have to go,” recalled Valery Kharlamov.

As played by Valery Kharlamov. VIDEO

Ahead of the Olympics in 1972 in Sapporo the famous Soviet coach Anatoly Tarasov decided to break the established combination. Kharlamov was transferred to the link to Firsov and Vikulova.

“Before the Games Tarasov invited me to a conversation as a senior in the top three, and said, “Boris, it is necessary to extend hockey life Firsov and Ragulin. I want to put them Kharlamov”. I answered: “And we, who are we playing?” – “Third, we’ll find you, you can handle it.” That settled the matter,” — said Mikhailov.

In the end, the team of the USSR won the Olympics, but Kharlamov was the best scorer of the tournament with 16 (9+7) points.

Not to mention the matches between the Soviet hockey team and the NHL for the clubs. So, the combination played by the Troika Petrova in the game 31 Dec 1975 in a meeting with “Montreal” (final score 3:3), is simply outstanding. Enjoy as a Soviet legend “drew” this goal. It seems that the shock was even the most devoted fans of “Montreal”. And the hockey Mecca has seen a lot of beautiful and elegant combinations, it is not so easy to surprise.

A beautiful combination of three Petrova in a match “Montreal” — CSKA. VIDEO

Not just this legendary trio was inducted into the Hall of fame of the International ice hockey Federation, and Kharlamov – even in the hockey Hall of fame in Toronto (2005). These legendary forwards deserve such honors! Alas, but alive today were only Boris Petrovich Mikhailov, who still tries not to miss a game of the beloved and his native CSKA.

Ovechkin for the second time became a father

Igor Esmantovich broadcast “Match TV”: “CSKA is not in talks with Capitulum and Sorokin”

Leonid Vaysfeld: “the Task of the “Vanguard” to break with Andrighetto and Beck without losing money unrealistic”