HomeФутбол“Bournemouth” wants to sue Hawk-Eye. They blame the system relegation from the Premier League 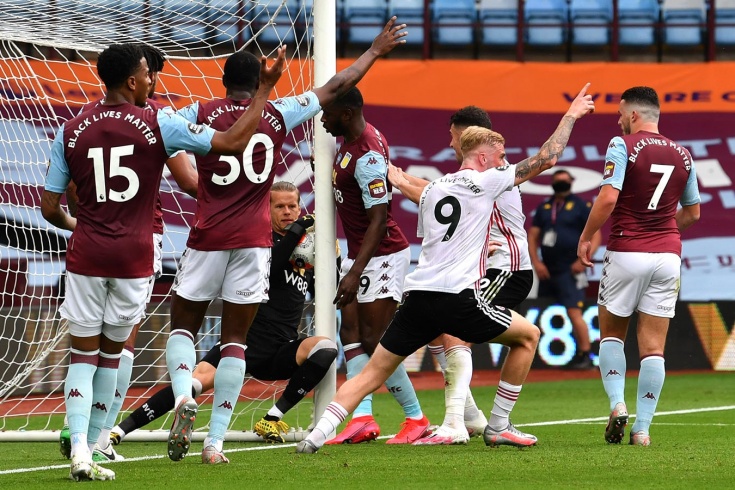 English “Bournemouth”, who last season were relegated from the Premier League, I remember a curious incident in the match of the 28th round of Premier League between “Aston Villa” and “Sheffield”. In the 42nd minute after a free kick the midfielder “Dynamo” by Oliver Norwood, the ball caught the goalkeeper involved of Aryan Nyland. On the replay clearly shows that the Norwegian goalkeeper caught the ball behind the goal line, pinning it to the bar. However, the system determining the goals Hawk-Eye didn’t work, and the meeting ended in a goalless draw.

Now, according to Sky Sports, the Board of Directors “Bournemouth” wants to sue the company, as it believes that this error affected their relegation from the Premier League. Cherries will not require recovery of the club in the Premier League or the recognition of the match at Villa Park expired and you just want to get monetary compensation.

Hawk-Eye apologized immediately after the match

The company recognized that the ball fully crossed the goal line and had to be counted. About it in the break, I told the referee Michael Oliver, who has not received any signal to activate the goal “Sheffield”.

“During the first half of the match, “Aston Villa” — “Sheffield United” the incident occurred when the ball crossed the goal line the goalkeeper “Aston Villa” Ariana Nuland. Officials of the match has not received the signal, neither the clock nor in the headphones. Seven cameras positioned in the stands around the gates were substantially closed by the goalkeeper, the defender and the goal post. Such situations have never been observed before in more than 9,000 matches, which was a system of determining the goals of Hawk-Eye.

The system was tested and proved to be working before the match. It remained functional at all times. Hawk-Eye apologizes for the Premier League, “Sheffield United” and all those affected by this incident,” — said in a statement.

A statement was also made by the body responsible for officials in English football — the Professional Game Match Officials Limited. They explained why judges responsible for the system VAR, ignored this episode.

“In accordance with the Protocol of the IFAB (international football Association Board. – Approx. “Championship”) VAR can test such a situation, but the system had not intervened in this episode due to the fact that the match officials on the field got no signal,” — said representatives of the organization.

What do the lawyers and sports lawyers?

Lawyer Thomas Horton explained how “Bournemouth” can claim compensation for a failure in the system Hawk-Eye.

“There is an argument to say that Hawk-Eye is obliged and “Bournemouth”, and other clubs in the Premier League. They lost income due to the fact that not occupied a higher place in the League. This is something that happened once in more than 9 thousand matches, so the rarity of such a case is incredible. I think that the claim “Bournemouth” to be accepted in court”, — said the lawyer in an interview with Sky Sports.

We turned to sports lawyer Mikhail Prokoptsov, which confirmed the fact, the court has the prospects.

“If to speak globally, such things should not occur in the most elite football championship in the world. I’m talking about mistakes that affect the distribution of the final places in the standings. We usually criticize it for our championship, but this turned out to be happens in the best leagues in the world. As for the legal side, of course, given that the company responsible for the system Hawk-Eye, admitted his guilt, there are prospects. But you have to understand that she pleaded guilty to episode with the goal, not the departure “Bournemouth”. If the club will go to court, “Bournemouth” will have to prove the fact of occurrence of the damage, that simple enough. And secondly, we need to prove a causal link between that error and their departure. The court may say: “And I have confidence that Aston Villa have not scored would then return?”. There is no clear causal relationship. In any case, the prospects of the court is. Of course, if the “Bournemouth” will be able to prove a causal relationship, size and fact of damage. Please note that Hawk-Eye admitted fault for a specific error and apologized not “Bournemouth”, only “Sheffield,” said Prokopets in conversation with the correspondent of “Championship” Arina Laurel.

In the coming days the Board of Directors “Bournemouth” should hold a meeting with the lawyers, where the final decision on the court. The “cherries” has a good chance to win this case and get good compensation.