But Shakhtar are very good! Maybe “inter” from “MU” to remove 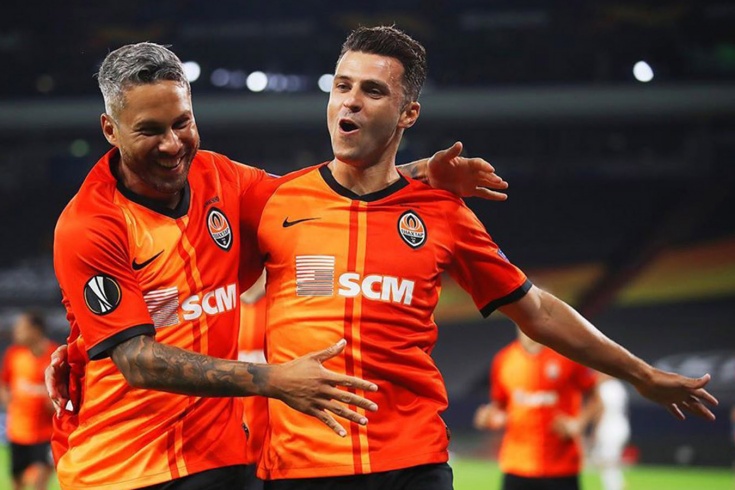 In the Europa League has determined all semi-finalists. Sunday, August 16 “Manchester United” will play with “Seville”, and on Monday, the 17th inter with Shakhtar. Recall all the matches of the final eight are in Germany.

From the start, Shakhtar took the ball (over 70% ownership in the starting period) and at 2 minutes opened the scoring. On giving angular defenders “Basel” dismantled players “miners”, however, missed the jerk from the depths of Junior Moraes. Yes, and the goalkeeper Djordje Nikolic wrong exit.

The Swiss, it seemed, simply did not understand that to oppose Shakhtar did not have the necessary plan in attack. Except by individual action could create something. Chic the passage of Atomico Pululu sweeten the pot, but the winger missed the goal.

But “Shakhtar” in the middle of the first half, scored the second goal. A quick counterattack was decorated with an exquisite pass the ball before impact of Tyson. A slight deflection changed the direction of flight of the ball, so Nikolic was played.

Before the break, the Donetsk team is quite enough for a big win. Created a few chances, one of which ended in a crossbar challenge. Shakhtar struck 12 strokes (target – 5), while Basel is only seven, and the target was not hit even once.

Until the middle of the second half, “Basel” almost it turned out nothing in attack. The Pitmen are well kept the ball, thus sucking power from the opponent. But then the Donetsk team, briefly lost control of the game. There have been two controversial episodes in the penalty area of Shakhtar with the participation of the Dodo (combat with Pululu and hit the ball to hand) – they checked in VAR. Both times the judge did not assign a penalty, probably correct.

In the 75th minute, the score still became big. Players “Basel” feel in the shoes of Spartacus. If their use penalty not set, the “miner” was given for a foul on Taison. Alan Patrick struck goalwards that was not expected by the goalkeeper. After that, the game essentially ended. It got to the point that full-back Dodo has joined forward and scored the fourth goal! The team again made a very solid impression, it is able to compete with the favorites of the Europa League.

In the meeting, “Wolverhampton” Sevilla is also quickly defined the team in possession of the ball and territorial advantage. The Spaniards forced the British to defend the low block. However, the representative of the submarine was ready for this game. Team Nunu is not pressed, and properly covered all areas, prevented “Sevilla” to easily change the direction of attack to move the ball from flank to flank. It was a slow game that could only be opened by the first goal.

“Wolverhampton” were able to score it for 13 minutes. Powerful and fast Adama Traore ran from midfield, won a penalty. To “the point” came Raul Jimenez. Conducting a good season, the striker this time blunder. He struck, and the Moroccan goalkeeper Bono showed itself in all its glory – has helped the team.

The second half was too monotonous. Not to say that boring, but still the team played predictable. One of the most striking episodes was the hit of the ball in the back of the head of the Italian referee Daniele Orsato after a corner.

“Wolverhampton” bent his line. After replacing the rebuilt from 5-3-2 to 5-4-1, obviously, the better to run to the counter. However “dry up” and catch the error “Seville” the British failed. Everything was solved in the end. In the 88th minute after a corner Every the Banega has not prevented to freely confine the penalty to Lucas as Monaco, who scored the winning goal with his head.