The conduct of the quarantine hockey players 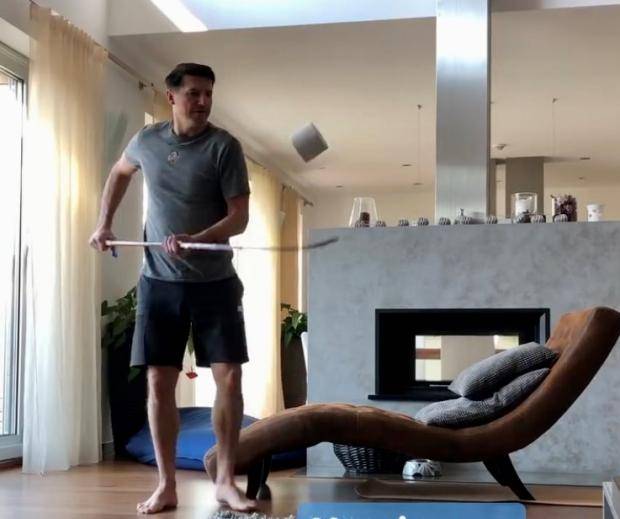 This rapid and abrupt hockey stop. Thanstarted with players forced break? Someone closed the house in quarantine, someone went from cities to nature, and someone comes up with entertainment on the topic of the day – all this in the review of social networks:

Alexander Ovechkin spends time with family at home. Recently, the wife of Anastasia striker told followers on Instagram that a large number of products purchased by them is not panic, but an opportunity to spend time at home. Citizenship Ovechkina is two weeks from home home away from home for the sake of health, his and others. Moreover, Ovechkina waiting for replenishment, so precautions will not be superfluous. In the stories of Anastasia can be seen, as Alexander maintains a personal tone in the gym, and how they watch movies and play cards. Artemiy Panarin free time enjoys spending for the new house. Not so long ago the forward “new York Rangers” and his girlfriend Alisa Znarok acquired property. Now we need to fix the place up – Alice is the decor, and the Artemia produced the birdhouse and did the latch on the fence. However, with the recent released of the incident, the hockey player put in the wrong way round. Juho Olkinuora, the goalkeeper of “Admiral” has posted a message for his countryman, forward of “Siberia” Finn Juuso Puustinen. “Hang in there! And soon to come – I had prepared all for a bonfire and came up with new jokes,” wrote the post of Olkinuora If in Finland are stocking humor in Russia buckwheat. This topic was a joke Maxim Chudinov, signed the photo with a pasta: “Until we all moved to the buckwheat.” Defender of the Moscow “Dynamo” in a pause decided to start cooking – in the stories ofAndrei Mironov in the country cuts the vegetables and roasting tomatoes on the grill. Vitamins – our all during a pandemic. The goalkeeper Moscow “Spartaka” Nikita Bespalov also spends time outside the city. With his father, the goalkeeper went fishing and returned with a great catch. Forward “Vityaz” Alexei Byvaltsev managed to fly away on vacation and now basking under the sunlight in UAE. But the hockey players SKA have nothing – the team of Alex Kudashov continues training on the ice. Most players, after all, spends the duration of the quarantine house. So, how do you not born of another fun challenge! Mihalcescu, Czech hockey player that previously played for “Salavat Yulaev” and “Siberia”, and is now the assistant coach of HC Pardubice, offered original entertainment. To participate in the challenge will need a stick and some toilet paper (the subject of hygiene in the era of quarantine is becoming a “cult” not only in Russia). Mikeska fills a roll, and then launches it at the camera! Cech has already passed the baton to the challenge#STAYATHOMECHALLENGEсвоим friends. Maybe the KHL will take?