HomeFootballDomenico Tedesco: to win, worked at the camp as animals

On the eve of the match with “Dynamo” the head coach “Spartaka” Domenico Tedesco answered questions of journalists. 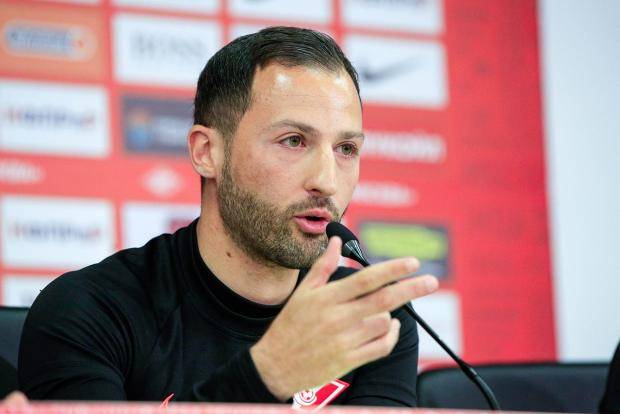 Head coach of “Spartacus” Domenico Tedesco conducted the “Opening Arena” press conference before the match of the 20th round of the Premier League with “Dynamo”.

– With what mood you meet the second part of the season?
– I missed the press conferences, so I am glad to see. Finally over this long break. We are all eager for the fight and want to play football. Fees have gone in our favor, the team did a good job. Although I will tell the coach of any team. The game will put everything in its place. Understand that the game against Dynamo is not just a match, and the Moscow Derby. It is also felt inside the club, and in communication with the fans.

– The condition of the nail Umarov and whether there are health problems from other players?
– From Naila with an ankle problem. Waiting for him in the ranks as soon as possible because this player is important to us. Still can’t count on Selikhova and Schurrle, who will miss the next few matches.

Rookie Alexander Sobolev missed the first gathering “Spartaka”. If he scored the optimal condition?
He’s fine, very settled in the team. We lacked forward with the selection of qualities: Sasha is a tall, young, talented. And he is a Russian. Don’t expect miracles from him, while pleased with how Sasha works at this stage. And other purchases we are not required. We have a good team that is able to progress. – Can help the first team experienced Roman Shishkin, who joined “Spartak-2”?
Application form for the first team is largely a formality. Although, of course, no one knows what lies ahead. The second command is important to us. We follow the “Spartak-2”, took a few guys for training camp with the team, some will continue to train with us.

– Whom from young you can allocate?
All’s been working great. Marketnow, Glushenkov, Bud… But most of all convinced Pavel Maslov. Great player! Technical. Real Siberians: he has already a lot of matches in the first division, he is a hard worker who quietly goes about his business. Pasha deserve to be in the first team.

Dynamo looked good in the end of the first half of the season. What can you say about tomorrow’s opponents?
Is a good team that tried to winter a variety of tactical schemes, so we are preparing for several scenarios. Can select the German of Philip, forward Komlichenkoknow in Stuttgart of Sonica. In short, the rival is very serious.

– “Spartak” is in a difficult position. It at you does not press? What are the goals you set for yourself in the spring?
In Qatar I had a conversation with Leonid Fedun. No tension no. We all know what place in the table now. But the situation was already difficult, when we came in. And our goal is clear: to win every match. That’s why we like animals worked at the camp.