HomeFootballEduard Sobol: I don’t know what happened between Shevchenko and Rakitskiy

Eduard Sobol: I don’t know what happened between Shevchenko and Rakitskiy

On days of the completion of a career in the national team of Ukraine announced the defender of “Zenit” Yaroslav Rakitskiy, who believes that Andriy Shevchenko has ceased to call him “because of politics”. And we talked to other Ukrainian defender, with constant practice and in the national team and Belgian “Brugge”. 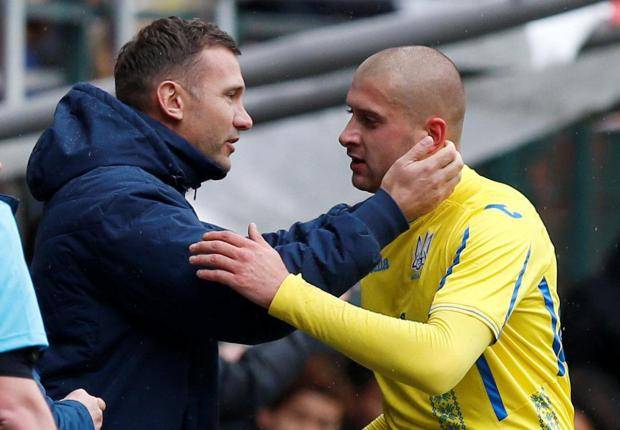 24-year-old Sable is one of those who, under the leadership of Shevchenko mined Ukraine early this fall, qualified for Euro 2020 in a very difficult qualifying group with Portugal and Serbia. The right to the talented defender still belong to Shakhtar Donetsk. But in recent years he defended the colors of different European clubs, who rented it from the Pitmen.

With summer Sable stands for “Bruges”, which may redeem his contract at Shakhtar in 2020. On account of his 10 matches of the Belgian championship and two games in the Champions League. Including against real Madrid at “Santiago bernabéu”, where “Bruges” got an honourable draw 2:2, and Sable played the 90 minutes. But for the match with PSG on Wednesday, the Ukrainian defender watched from the bench. In Paris, his team again was close to sensation: behind 0:1, Brugge got right on the penalty spot in the 76th minute, but Mbaye Diagne could not beat the Keilor Navas…

– Club Brugge played very bravely against PSG. Tune in to star Parisians helped their recent sensational defeat in the national championship from the “Dijon”?
– Well, Yes. We are together and reasoned, if “Dijon” was able to beat PSG, then why don’t we try? It was serious. The guys gave the fight their all. Sorry, missed a penalty at the end. The play has been much better than two weeks ago, when we skipped home from the Parisians five goals… Now we have the better team in many statistical indicators. So unpleasant residue remained. – Diagne was very upset by missed penalties?
– Upset, of course. But no one didn’t blame him, you guys okay? The penalty shootout is a lottery, anyone could not to score. And the failure of Diagne has not knocked the team out of the rut. We continued to attack and create chances.

You and real Madrid had a great game in Madrid. Led 2:0, played 2:2…
– Do you think it could take away from “Santiago Bernabeu” victory. Missed several chances to score the third goal. But a draw away from “real” – still a great event. The Belgian press after the match, we praised.

Now Brugge have to fight for third place with Galatasaray?
– Well, it is theoretically possible to fight for second place, but, of course, the main thing for us is to qualify in the spring stage. Let it be the Europa League.

The same can be said about “the Locomotive”. Muscovites looked decent in the games against the favourites, but will contest third place with Bayer. Saw the winning goal against Juventus in Cherkizovo?
– Yes, I watched the highlights. Your goalkeeper early in the match made a mistake, but then a lot of dragging. Well, the winning goal Douglas Costa is individual skill. There is nothing to do was impossible.

– Now I do not regret that fate has cast you in Belgium? Interesting championship?
Very interesting. A lot of decent teams, tough competition, great atmosphere in the stadiums. And most importantly – you’re always in sight. Belgian League very closely by scouts from top European clubs. Therefore, there is always a chance to go on increasing. You play well – you will definitely notice.

– In Belgium and is now the author of one of the goals of the national team of Ukraine in October winning the match against Portugal, Roman Yaremchuk. Crossed paths with him?
– The “Gent” with Yaremchuk plays a couple of Ukrainians – Roman Bezus, Igor Plastun. But I saw her only once when I arrived in Bruges. On the field, then do not overlap. And free time to go somewhere, meet there. A very tight schedule. Here in the national team with Yaremchuk see each other regularly.

– Such a large number of foreign players is a plus for the national team of Ukraine?
– Of course. In Europe young people easier to progress. Many guys noticeably increased after moving to a foreign League. Yes, there is a flip side of the coin – the domestic championship over the last five years has decreased. But this is not a minus for the team. Now in the Ukrainian clubs have more trust in young players who previously would not have received the chance. Open new names.

From Russia to Europe almost nobody goes. And Vyacheslav Karavaev, for example, recently returned from the Dutch “Vitesse” in the “Zenith”. What is promising to advocate a strong European team out of the top of the championship or fight for a place in the richest club of Russia?
– Karavaeva I heard, when he in the Czech Republic was playing. I too played there, for “Jablonec nad Nisou”, “Slavia”… it would be better from him to ask. But, in my opinion, the transition to Zenit, where he now has a permanent practice, is a step forward.

– And how to perceive speech in Russia, some Ukrainian players? The path to the national team after this cut off?
– I think the coaching staff of Andrei Nikolaevich Shevchenko monitors all potential candidates. No matter where they are. Take the same Vanya Ordets. I do not think that the road to the national team for him after the transition to Dynamo is closed. Now he started playing for the club, to score. Do not be surprised if his cause.

And still not all the way. Rakitskiy explained his departure from the national team the fact that Shevchenko does not cause it fundamentally for political reasons.
– I don’t know what happened between Yarik and Andrei. But the team determines the head coach – and he alone. As for the words Rakitskiy… I read his post. Everyone is entitled to their position. I played with Yarik and Shakhtar and the national team. I can say enough good things about him. A very strong player, which from year to year proves your level. And he really laid out in matches and in training by 200 percent, he said. It is not an exaggeration.

– Rakitskiy made the mistake of going in the winter in the “Zenith”?
I don’t know what his motives were. Zenit is in the Champions League, but Shakhtar played there. And very good. The argument that he had to feed his family, not convincing. In Ukraine Yarik also good would be earned. I guess he just wanted a change of scenery. All his football life was spent at Shakhtar, starting with coach. And the consequences of the transition for him was obvious. He also once said: “Know the risks”. The reaction of Ukraine was read in advance. So no one to blame here. As it happened, it happened.

– If you were offered an exceptional contract at Zenit, moved to St. Petersburg?
– I don’t want to say anything bad about the Russian championship, but I see my future with Europe. My dream is to go to a big club from five top leagues. Well, now I do everything to help make a difference, “Bruges”. At the moment – all thoughts about this team.

– The Russian team, as well as Ukrainian, ahead of UEFA Euro 2020. Watched her speeches?
– The matches did not look, but the results in all groups tracked. Of course, aware that Russia was on the Euro. I think in your country too, grows talented generation. Hence the progress in results, which began at the world Cup.

– I would like to play against Russia in a UEFA Euro?
– It may not happen until the playoffs. And no preference who to play there, I don’t have. If grid will bring the team in one pair, then play. Check to see who is stronger.

Shevchenko holds press conferences, mostly in Russian. And what language he communicates with the team in training settings?
– Also in Russian. In the team there are guys for whom the main language is Ukrainian. But even they are switching to Russian. It’s more convenient. However, for Andrey Nikolaevich this moment is unimportant.

– And for the players? We know also that many in the national team of Ukraine take an active political position.
And what’s wrong with that? We are free citizens of their country. Each of us is entitled to any position. Each in varying degrees, interested in politics. Although I personally wish she was as far away from the sport.

– In the team to discuss policy?
– No. Thank God we were not before. In the team we are preparing for games, practicing.

– And your performances abroad? That, by the way, talks about “man city” Alexander Zinchenko?
He’s happy, as is his career in the strongest League in the world. In man city you can progress even in training. There is this crazy part. And Sasha won more or less stable position… And Ruslan Malinovskiy told about how the Italian League is more intense than the Belgian. There is loads much more serious. And he is also in the “Atalanta” pretty well. Gradually mastered.

For the national team of Ukraine are the two the Brazilian and Marlos Moraes. How do you feel about naturalization? In Russia it is a sore subject…
– I don’t see any problem here. Moraes and Marlos – good, decent guys who’ve been playing in Ukraine, you know our culture and mentality. I know, they “own”, fluent in Russian, did. Therefore, no one perceives as naturalized. The same players the national team of Ukraine as everyone else.

The hottest Derby in the world. Stabbing, war banners and fighting the President