HomeAutosportElectrobolt challenged the huge “the Boeing”. Why? 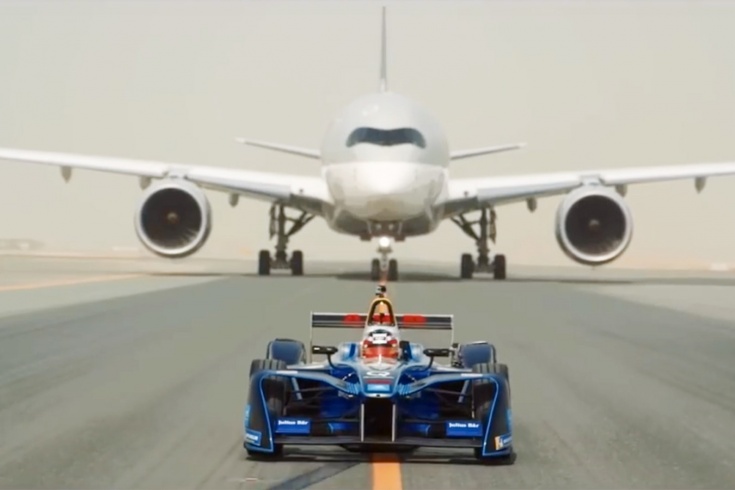 Race cars often present at the start against a variety of exotic machinery — and with Formula E now to compete with planes and cars. Remember how Jerome d’ambrosio raced passenger liners.

Formula-E races at the airport “Hamad” in Doha in March 2018 has provided a Spark SRT_01E, the first electric car series. Extreme power of its engine is 200 kW, which is estimated at 268 horsepower. High maximum speed of this car can not boast — only 225 km/h, but up to a hundred, he accelerates in three seconds.

In the first case, task d’ambrosio was accelerating to overtake on the runway of the Airbus A350. This aircraft is capable of takeoff weight of 275 tons and can accelerate up to 944 km/h in the air. But on the ground the aircraft has something to boast about: at first, the giant machine was inferior to tiny Formula E — the one hundred in three seconds, but then Airbus is gaining speed and at the time of separation from the earth ahead of the electric car.

In the second race, d’ambrosio had to overtake coming on Board the Boeing 787 Dreamliner. It is difficult to understand the essence of this contest: the plane-the speed lost, not gained. And then d’ambrosio managed to stay in front and left the plane behind.

“Great, machine. You went faster than the plane that tried to slow down,” reads the most popular comment under the video, which attracted more than 900 likes.

Competition in General has shown nothing new SRT_01E has been relatively slow car and no one was hiding. Why was it necessary to substitute the green in all respects the equipment for the inevitable defeat, absolutely incomprehensible.

Modern electrobiology Gen2 slightly faster and the battery lasts for the whole distance. But even it is far from the famous Ferrari without spoiler, where the legendary Gilles Villeneuve raced with the pilots of the Italian air force.

LeClair missed out on the victory, Vettel spun in the first race. How was the race weekend

“Williams” surpassed Ferrari, Grosjean and Marcus sat behind the wheel. The results of the racing weekend