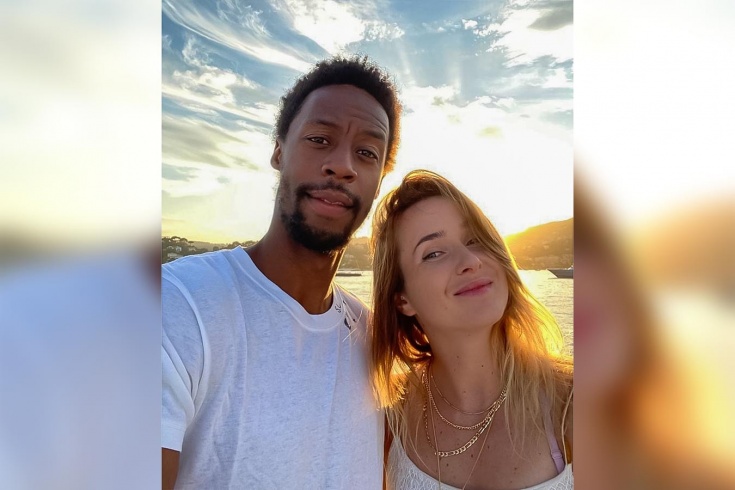 After the restart tennis season is already gaining momentum. After the tournament in Palermo in women the next Prague or Lexington. So the players between training sessions and matches harder to find time for rest and entertainment. Look what happens to athletes in social networks.

Former 4-I racket of the world and the recent champion of the Kremlin Cup Swiss Belinda Bencic was going to play in the tournament in Prague, but in the end withdrew from him, apparently deciding that while it is too early to resume competitive practice. Belinda returned to training, which includes walking in the Swiss mountains. During one of the hikes in the mountains Bencic met a cute calf.

Russian Vitaly Dyachenko has noted the 30 anniversary. Tennis player showed his followers on Instagram gifts. Especially picturesque (or caloric) was a birthday cake in the form of a tennis court.

One of the first players who decided not to go this year at the US Open, was Anastasia Potapova. She has presented to the subscribers of his friend, a little puppy Jackie. By the way, recently Anastasia was awarded the title of master of sports of international class.

The last time Maria Sharapova are less likely to be noticed at social events, and increasingly she’s with her boyfriend Alexander Gilkson chooses nature trips, walks in the woods and mountains. In July the young people on a field trip to the wilds of Colorado celebrated the birthday Gilks, and now went to Idaho. The Russian woman even joked: «Sorry for the awkward giggle — I forgot how to pose in a cocktail dress. This was not so long ago! Does anybody else feel the same?»

Apparently, Maria and Alex were invited to the wedding, which was held in sun valley, Idaho. This place is famous as a mountain resort with many Sunny days a year. From the sun’s rays Sharapova and her boyfriend had to hide under umbrellas. By the way, sun valley became known after the famous movie of the 40’s «sun valley Serenade».

The famous tennis couple – Elina Svitolina and Gael Monfils is back after sailing across the Mediterranean sea and settled on shore. The Ukrainian said that it is not ready this year to participate in the US Open as her boyfriend. «I’m uncomfortable to go to the USA, exposing his team and himself at great risk,» wrote Svitolina in his Instagram. Free time she has many and she can play with the Gael in the traditional French game pétanque, which, by the way, nice developing eye and accuracy of shot.

The former first racket of the world, the champion «Rolan Garros»and Wimbledon -2018 2019 will be Simona Halep has decided to begin the restart of the season with a tournament category WTA International in Prague. Romanian initially received a wild card to the tournament in Palermo, but then refused to participate. Now, apparently, Halep ready to compete and showed up immediately on both the category – singles and doubles (together with Czech Barbora Strycova).

Darya Kasatkina has played in one tournament after the resumption of the season – in Palermo, she lost in the first round of the Italian tennis player Yasmine Paolini. Then the plans from the Russians – Prague. And yet she has time to see the gifts from your favorite football club «Barcelona». She sent so many t-shirts that she does not have time to try them all.

The US Open champion-2016 Stan Wawrinka decided to skip the entire American series of poker tournaments including the U.S. Open and focus on the dirt part of the season. To gain match practice, the Swiss even showed up on two consecutive August Challenger in Prague. It is curious that on tournaments of a similar category Wawrinka haven’t played in 10 years.

Anna Kalinskaya, who a month ago had coronavirus, finally ready to start participating in tournaments. The organizers of the «masters» in Cincinnati, which this year moved to new York gave the Russian wild card in qualifications. And while it is possible to train juggling with a racket and balls.

Husband of Serena Williams Alexis Ohanian fights for the rights of blacks even at home in the kitchen. In support of their favorite women – wife and daughter of Olympia – he made pancakes with their images.

Itself Serena is now being prepared for a series of three tournaments on the American hard – at first she will speak in Lexington, then in new York at the Premier tournament, and then the same at the US Open. Naturally, the athlete, with such fighting spirit it takes a village. Looks like he’s got them already. Williams posted on his Instagram photo, which Olympia mom helps button the dress at the back. «She had my back. And I always got her back,» wrote the American.

In Lexington already practicing Arina Sobolenko. And the singer trained so hard that even the sun burned and said about its appearance so: «Topic «50 shades of red» continues.»

The first racket of the world Novak Djokovic has a very peculiar Declaration of love to his wife, Elena. The Serb posted a photo where he and his wife are in positions of swallows, touching each other’s foreheads. «You’re too good to believe it… can’t take my eyes off you… Without exaggeration,» wrote Djokovic under the photo. By the way Novak has not yet decided whether he will fly to new York, while he guided many players because it not only tops the ranking, but also is the head of the players Council ATP. Djokovic and other tennis players are not happy with what is still the leadership of the ATP and USTA have agreed with the authorities of European countries to abolish the mandatory quarantine for the players and members of their teams who will arrive after US Open to Europe.

Strength training conducts a tennis Academy in Barcelona Russian Karen Khachanov. «Preparation for the season continues. Without pain and working result cannot be achieved!» — written Russian in his Instagram.

Tennis season resumed in August the WTA tournament in Palermo. From August 10, will begin women’s tournaments in Prague and Lexington, next will be the combined women’s and men’s competition in Cincinnati, which will be held in new York (21-28 August) and then the US Open (August 31 – September 13).