HomeHockeyGirls, champagne and cleaned out the apartment. As a goalkeeper Belosheikin drink clonidine

Girls, champagne and cleaned out the apartment. As a goalkeeper Belosheikin drink clonidine 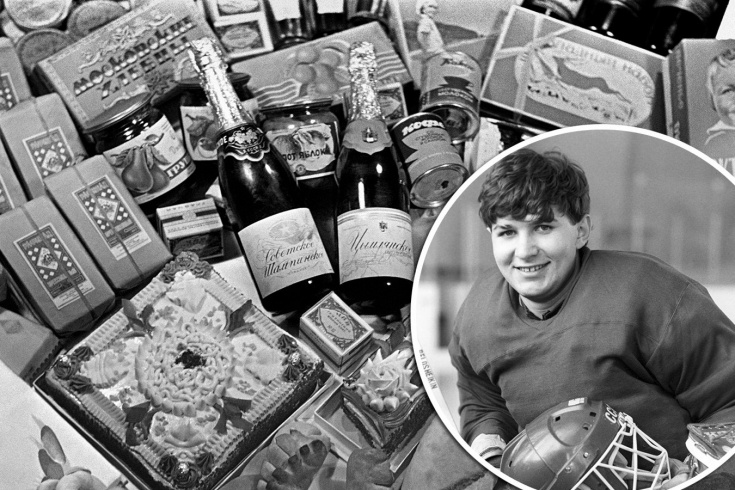 In the mid 80-ies of the last century glorious playing career in CSKA and the USSR national team finished the legendary Vladislav Tretiakand three-time Olympic champion already had an heir. They were Evgeny Belosheikin – young goalkeeper SKA Leningrad, in which the steering of the Moscow of CSKA Viktor Tikhonov saw a new hope of the great Soviet national team. In 18 years, Belosheikin was in CSKA, he predicted a brilliant career, but as a result of “over-achiever” is remembered not awards, titles and public recognition, and the scandals, the image of binge drinkers and suicide in 33 years.

“The niche left by Tretiak, was to take what he”

The belosheikin was born in 1966 in Sakhalin, where in search of work for several years before he moved his parents, natives of Petersburg. Father Eugene Vladimir at the time, managed to play in the reserves of the Leningrad “Zenith” and on Sakhalin led the Junior school and sent his son. The belosheikin, Jr. from an early age addicted to the sport, and made progress in many disciplines. First ski, and then, after the family returned to Leningrad, football, volleyball, basketball. But the direction he chose hockey – Belosheikin recorded in the school.

Physical health and talent he was not to occupy, and he quickly made his way to the main team of the city. Right from schools, bypassing the juniors, the Belosheikin at 17, got into SKA, which immediately drove from the composition of the older, more experienced colleagues, taking the place of the first number. In the young goalkeeper is believed the coach of the Leningrad team Boris Mikhailov, and only a year on Belosheikin noticed the steering CSKA and the Soviet national team Viktor Tikhonov. In Eugene the legendary coach saw a new Vladislav Tretiak.

“It so happened that recently Viktor Vasilyevich Tikhonov recalled Evgeny Belosheikin – told as-that the partner of the goalkeeper of CSKA and the USSR national team Alexey Kasatonov. — Crazy talent was the goalkeeper, the likes of which in Russia today, probably not. Niche left by Tretiak, was to occupy the he”.

In 1984, the Belosheikin was in Moscow, became the main goalkeeper of CSKA, and from 1985 to 1987, Mr. Polyansky has held the number one position already in the Soviet national team. This time was the best in his career Belosheikin, who inherited from Tretiak 20th game room. For three years Eugene has won three gold of the USSR championship, youth and adult world Cup in 1986, went to the national team for the two-part “Rendezvous” with the star players of the NHL in 1987, which was voted the best goalkeeper of the tournament. Belosheikin was only 21 years ahead was drawn incredible vistas, and the nearest of them – the role of the first goalkeeper of the Soviet national team at the Olympics in calgary.

However, the Games in Canada for Belosheikin turned into a huge disappointment, from which to recover, alas, he failed. At the last national team training before departure to Canada on the goalkeeper fell with a teammate and broke his leg. In calgary Eugene was only as a tourist and not received the results of the tournament, no gold medal or the title of honored master of sports – the only one from the Soviet national team. 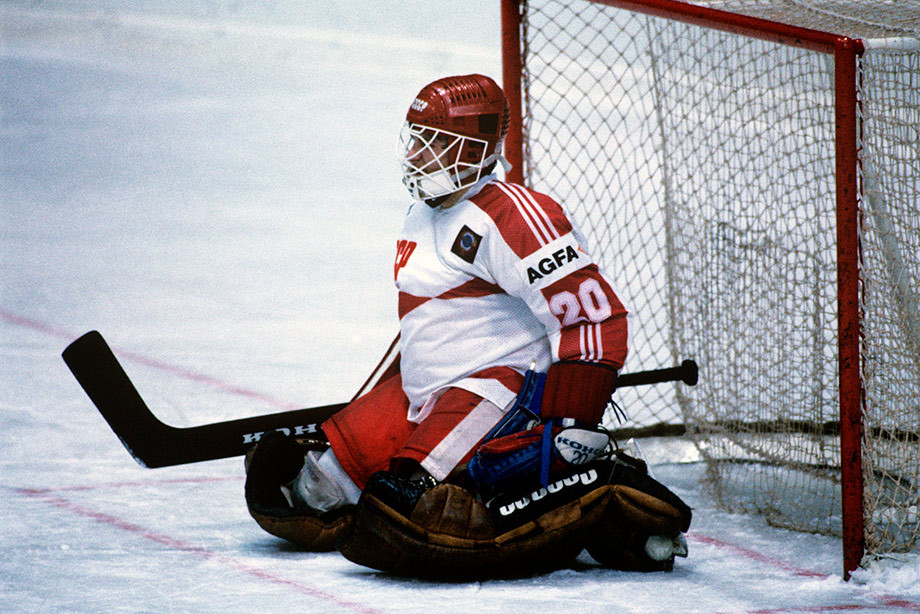 Clonidine in champagne and “drunk driver the Belosheikin”

For ambitious Belosheikin this was the beginning of the end. Drank heavily even with the Leningrad times the hockey player finally got on the glass and quickly lost myself. Season 1988/1989 was the last for Evgeny CSKA where for drunkenness threw him out Viktor Tikhonov. After that Belosheikin for a few matches “pop up” in SKA and even went to Edmonton, who picked the goalie in the draft, not knowing about his problems. But career of the talented goalkeeper was not saved: he was killed too thin for the athlete mental organization and excessive alcohol use.

“He was a good hockey player — Eugene Belosheikin! remembered his kind words of the great Victor Tikhonov. — However, he drank a lot, heavily. With buddies, and often alone. What we just did — begged, scolded, treated in the clinic. Once even forced to sew a “torpedo”. And he, a few days cut her and drank again. Then I brought Belosheikin from the core team, declaring: don’t stop drinking, you will be gone at all. Hockey he loved, and I thought I was separated from him finally come to their senses. Not senses”.

The belosheikin drank throughout his short career. From time to time, this did not prevent him from showing brilliant results on the ice, but had no effect on his reputation. Perhaps it was because of her Belosheikin and deprived of awards after the Olympics in 1988.

Eugene regularly got in some stories. The first happened to him before his marriage in the period of successful performances for CSKA. The army club has already allocated his new shot is a separate room in Moscow, where once the Belosheikin and his best friend Alexei Gusarov led the party to two pretty girls. Friends opened a bottle of champagne, and woke up in the morning in cleaned out the apartment. It turned out that the drink had been mixed with horse dose of clonidine. The story to hide from the CSKA management not possible: the Belosheikin and Gusarov were subjected to penalties, although it turned out that both players practically nothing to drink.

From the episode with clonidine major scandal came out, can not be said about the other incident with Belosheikin. The goalkeeper with his wife, Svetlana, was returning from a friends birthday when their car was stopped by the police. The goalkeeper claimed that was driving his wife, he drank quite a bit and with the police not swear, but in the national press there was a note with the following words: “Drunk driver the Belosheikin attacked the guards dared to stop him”. The reaction of the army leadership was immediate: on Belosheikin fined and struck off the national team, air travellers departing on international friendlies in Czechoslovakia. 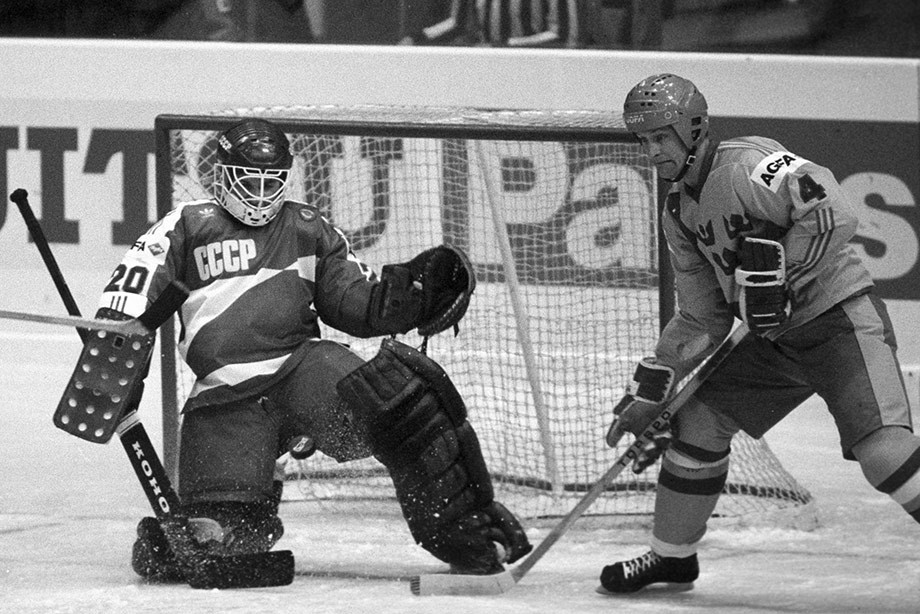 “I married the star, not for mediocrity”

However, all of these stories at the time, not much was reflected in Belosheikin’s career, while he held himself in his hand and shone at the gate of CSKA and the Soviet national team. Yes, he was a tough guy, but for the “army” club, where every third had problems with alcohol, this was nothing new.

Finished off the former Keeper of his father’s death already in the 90s: after the Belosheikin dropped completely. Disappeared from friends and family, began to sell different things, and even medals to buy alcohol. In the end this way of life led to suicide in 33 years in a tiny Dorm room.