HomeТеннис“Glad I have my job.” Eugenie Bouchard came to Europe to save his career 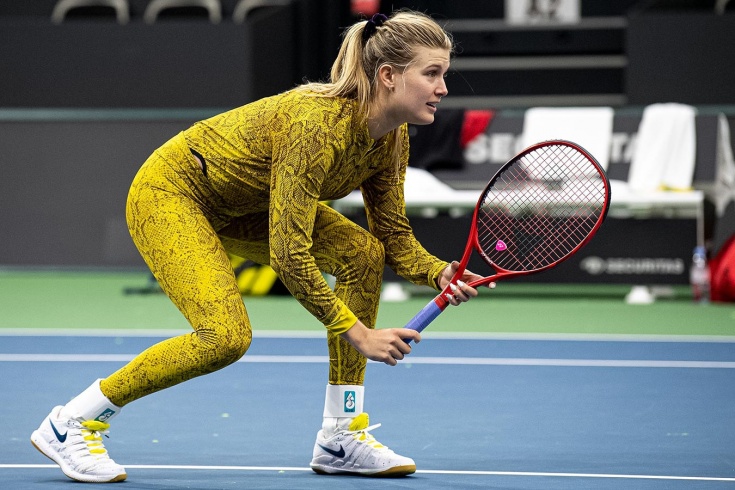 At the tournament in Prague canadian Eugenie Bouchard became the only non-European player in the main draw. Competition organizers granted the former 5-th racket of the world and finalist of Wimbledon 2014 wild card. And the first match showed that Eugenie is not in vain came from America to Europe to save his career.

The most successful season of his career Bouchard was 2014, when she in addition to the Wimbledon final was still two semi-finals of the “hats” Australian Open “Roland Garros” won his only title in Nuremberg and reached the final in Wuhan and came to the Final tournament WTA. But then Canadians the results began to decline. At the moment Eugenie was on 330th place in the WTA rankings.

The whole quarantine canadian held in the US. While it was impossible to start training, she began to look for other helpful activities: “During this time I realized that I love learning. Passed an online course at Harvard, very interesting neuroscience. And don’t ask why I chose it. Started to play the piano. Also, I started learning Spanish – I’ve been wanting to do it.” In addition, Eugenie was a member of several charity events. For example, the canadian tennis beauty auctioned the opportunity to watch the match from its box on one tournament choice and go with the winner over for dinner. The initial price of the lot amounted to 2.5 thousand dollars, but in the course of trading the amount had jumped to 85 thousand. In addition, Eugenie helped his fan to get free hearing AIDS from the manufacturer.

Once the quarantine action has been weakened, and have the opportunity to perform exhibition tennis matches, Eugenie began to attend various competitions. In particular, she spoke at the world team championship in Charleston, and together with his team won the main prize. Curiously, the ceremony Bouchard was entrusted to open a bottle of champagne, but it did it immediately. “I play better than idle. Someone teach me how to deal with bottles!” — wrote canadian in Instagram, commenting on a funny video.

Great competitive practice Eugenie Bouchard received at the time of the League of WTT (World Team Tennis), which is traditionally held in America in the summer for several weeks. Canadian played for the team “Chicago smash”, which reached the final. Itself Eugenie played only two singles matches, but a lot played in doubles and mixed doubles. It is curious that she even had in this tournament to perform the functions Bolger. “To make competitions safer in this tournament balls served players. I like it. I think WTT should implement it on an ongoing basis. How I coped with this role?” — Bouchard wrote in his Twitter.

To the surprise of many, Eugenie first tournament of the season after the restart chose the Lexington (Kentucky), and Prague. The Czech organizers of the tournament provided the 330-th racket of the world wild card, and canadian happily flew across the ocean to Europe, without fearing a sharp transition from the hard ground. The results of the draw first opponent Bouchard at the tournament in Prague was Russian Veronica Kudermetovaseeded at number eight. 1 hour 16 minutes a canadian has won – 6:0, 6:3. It was her first victory over a player the top 40 of the tournament in Luxembourg in 2018, when she defeated 24th ranked Carla Suarez-Navarro. “I’m glad I have another job. You begin to appreciate things when you lose them,” said Bouchard happy after the match.

With the release of the second round of the tournament in Prague canadian time, has risen in the interim rating by 30 positions up. If Eugenie will continue to score points on the ground, then it will have a chance to get on the “Roland Garros”, which will be held from 27 September to 10 October.