HomeБаскетбол“Hey, big girl!” The sad story of the tallest basketball players in the world 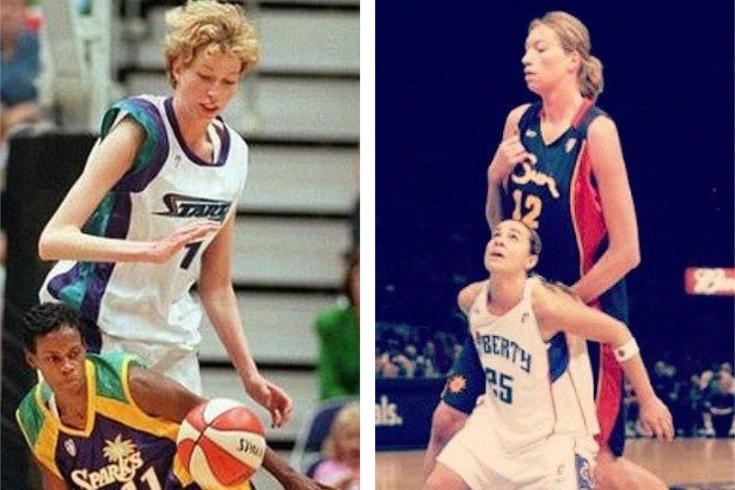 Center Malgorzata “Margo” Dydek-Twigg — the tallest basketball player in history. The growth of the Polish giant is 218, see men’s NBA record for growth are Manute Bol and Gheorghe mureşan (both for 231 cm). Followed by Shawn Bradley and Yao Ming (at 229 cm), and a whole bunch of players above 220 cm, including Russian Pavel Podkolzin (226 cm).

That is, the gap in men small. Margo Dydek in this respect — one of a kind among women. Before its growth even close no one short. Chinese Jan Haixia and Australian Elizabeth “Liz” Kember take second or third place in the list of the tallest basketball players of all time — both height is 203 cm Dydek above them at a whopping 15cm!

Giant growth can not be called a gift of nature. This anomaly, which is fraught with the giants for a variety of health problems. Very tall players rarely live long. The above minute the Bol passed away at 47, and famous Soviet basketball player Uvays Akhtaev.

Unfortunately, Margo Dydek was destined to live less than their colleagues, giants in men’s basketball. Center died at the age of 37…

Malgorzata Dydek was born in Warsaw in 1974. It was the middle of three daughters in the family. Genetics hinted that Margo definitely will not be short. The father, the growth was 202 cm, mother – 191 cm, the older sister Kateřina – 201 cm, younger sister of Martha – 198 see Malgorzata on his head outdid all the relatives.

In regular childhood Margot had to endure the taunts and jeers of their peers. They called her offensive names. The girl was an outcast — no one wanted to communicate with her. “Hey, tall girl! “–the most soft that I had to hear the girl in the address.

The only outlet in the life of little Małgorzata was the basketball. Have Dudekov this is a family affair. Katarzyna (born in 1970) played American College ball, after which he returned to his native Poland and has won 5 titles of the champion of the country in the “Arch”. In addition, she represented the national team of Poland in international tournaments, including at the Olympic games 2000 in Sydney. March (1982) also studied in the United States, but to the level of the WNBA fell short. She mostly played for various Spanish clubs during his career.

Malgorzata became the most successful basketball player in the family. Margo started playing basketball at age 12 and immediately began to make huge strides in the tournaments of his age group. The other children then treated her with more respect that in no way justifies their former boorish behavior. After school she continued her education at the University of physical culture and sports in Sopot. With 18 years began to get a stable game practice in professional club “Olympia” (poznań). In parallel, the youth team of Poland Dudek won bronze medals of European and world Championships.

In 20 years, Margo had moved to a foreign League, signing a contract with the French “Valenciennes”. In 1996, the center moves to Getafe, which twice won the championship of Spain (1997, 1998) and reached the final of the Euroleague season 1997/98. It became obvious that Margo must go on increasing. 24-year-old Polish girl was already a superstar at the European level. Of course, against opponents she stood out as fantastic growth, but it does not hurt her to be pure basketball skills.

A significant mark in the history of the WNBA Polish girl definitely left. Dydek still remains the leader in League history by the number of unit shots with 877. Ended the career of the legendary American Lisa Leslie (822) is in second place, and then a large gap followed by Brittney Griner (636) and Sylvia Fowles (621). This record may well be eternal, although the 29-year-old Griner has a relatively realistic chance to beat him. In the asset Dydek second triple-double in WNBA history. And with blocks, even in men’s basketball a rare phenomenon. In 2001, Margo scored 12 points, 11 rebounds and 10 block shots (a WNBA record) in the match against “Orlando”.

But no matter how strong or was the American League, a lot of the money was not paid. Seasons in the WNBA and Europe are at different times of the year for a reason. WNBA — more prestige. Americans are accustomed to count every penny and just don’t hold the WNBA, if the League was absolutely unprofitable. With regret we have to admit that women’s basketball is not very popular sport. Even superstar players in the WNBA get a paltry sum — a little more than the average salary in the United States. That is why autumn, winter and spring when the WNBA a break, almost all leave to play in Europe. So did Margo.

First Dydek defended the colors of “Gdynia” (1998-2005), which is 7 times in a row became the champion of Poland. In the season 2005/2006 Dydek moved to Russia. She won silver medals of the national championship with UMMC. In Yekaterinburg, the Polish stayed only a year, after which he became Vice-champion of Spain and the Vice-champion of Euroleague in the form of “ROS Casares”. Ended his career at age 34 at the highest level, “Los Angeles sparks”. After this, Margot’s family moved to Australia. The pole worked as a coach at the club “Northside wizards”.

The Malgorzata Dydek revered worldwide, and the proof is still in operation to this day numerically fan clubs. At home in Poland Margo actually became a real idol. One Dydek partial to the Italian went for it in anywhere in the world and always gave a bouquet of red roses. But the girl’s heart was taken. In the mid-1990s, Margot married Briton David Twigge. She bore him two sons — David (born in 2008) and Alex (born in 2010). In the spring of 2011 Dydek announced close of the joyful news — she and her husband were expecting their third child. Nothing boded trouble. But said the old disease — małgorzata since childhood suffered from arrhythmia. During his playing career, the disease is not particularly given itself felt, however, after the birth of sons heart problems worsened.

19 may 2011 Dydek lost consciousness in their own home. The doctors put her in an artificial coma and has supported the functioning of the organism pharmacological drugs. 27 may Dydek died, without regaining consciousness. The child also could not be saved. The urn containing the ashes of Margo was taken in Poland, and on 17 June buried in a cemetery in Ząbki. History Małgorzata Dydek full of tragedy. She had suffered bullying due to the abnormally high growth in childhood, but not broken.

Margo had a lot to do on the basketball court, but to enjoy family life and do not have time. Little David and Alex grew up without a mother, the third child was never born. Dydek passed away at the age of 37. She would have to live and live. Fate sometimes very cruel. The memory of Malgorzata Dydek will live forever. In 2019 it was included in the FIBA Hall of fame. To a huge regret, posthumously.