HomeФутболHow much can you go wrong?! In the game against Lokomotiv, the judges missed a penalty and removed the Slutsky

How much can you go wrong?! In the game against Lokomotiv, the judges missed a penalty and removed the Slutsky 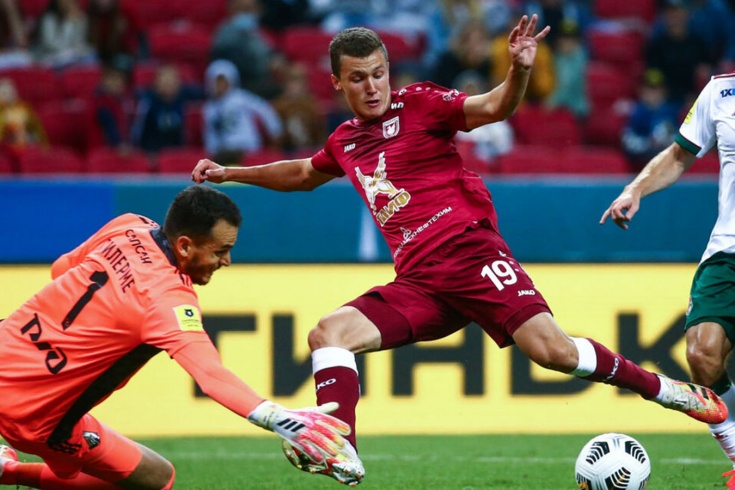 The new RPL season started with the judicial scandals. The most notorious happened in the match “Spartak” – because of a penalty against the hosts in the match “Sochi” the owner of the red-and-white Leonid Fedun had to threaten the football authorities withdrawal from the tournament, and the judges and the head of the VAR in Russia Leonid Blue to make excuses for their decisions live on television. But the first round did not end today in a match “the Rotor” and “Zenith”, according to the referee Igor Fedotov, incorrectly scored Dziuba. And later the scandal happened in the match “Rubin” – “locomotive” – disputes have arisen from-for not appointed a penalty in gate of visitors.

The episode happened in the 25th minute of the match in the penalty area Lokomotiv goalkeeper of Muscovites Guilherme knocked Ivan Ignatiev, but the referee this episode was ignored. There was a moment when the score was 0:1, and immediately after that the second goal in gate of “Rubin” scored Dmitry Barinov. Goals in the match was no more, but the suspension was removed head coach Kazantsev , Leonid Slutsky,who after the match harshly criticized the work of arbitrators:

– I already gave you an interview, drew attention to the issue of refereeing, – quotes Slutsky the website of the TV channel “Match TV” before the season we sent a letter, asked the arbitrator to explain the functioning of VAR. Yesterday, after a match “Spartak” — “Sochi”, the arbitrators were first explained. In our match the arbitrator has not appointed obvious a penalty. What it is — bias or low qualification of judges? They think we’re idiots, but people do not know how VAR works”.

But that’s not all. In the second half, Rubin were down to ten men, with fields removed Begich. All the controversial moments of the game specifically for the “Championship” was dismantled, the referee Igor Fedotov, continuing to develop your YouTube channel.

– Followed to appoint 11-metre blow in gate “the Locomotive”. Player of Rubin went one on one, and Guilherme was hit. And should be yellow card to the goalkeeper – he was still reaching for the ball, so it’s not a red card. Where was the VAR? Let it Kaloshin explains.

In judging if something like this happens, you have to be prepared that something will arrive in the answer. Here the goal Barinova immediately and flew, and then another, and removing the weekend. Now head Ivanov and Valosin fly – Kaloshin not explain that this is not apparent and not obvious. Question for VAR could be alone – whether playing Guilherme in goal, and he did not play. They looked instead, I don’t know.

Removal of Slutsky at halftime and Begich in the 65th minute

– Most likely, when the teams went to the break, Slutsky said something to Ivanov. Surely with obscenities and insults. But the card podbitogo room show according to the rules it’s impossible to do on the field. I think Ivanov Slutsky promised that it will be removed. So that if in the second half, Ivanov was standing with a red card in his hand. In the manner he did the right thing – listen to Slutsk, are they together something tried to explain, and then red for what was at the break.

And a foul on Smolove – pure red, there is denying an obvious goalscoring opportunity. looked instead, I don’t know.

This is a problem. I find myself thinking that I feel sorry for the judges. Not their fault, and those who teach them! They just don’t know what to do. The questions you should ask Blue – this gray Eminence goes over the heads! It’s not like the referees to take and unlearn to judge? This does not happen! So they drummed into my head that we should do things the new way, otherwise they will not be judged. And rebuild they can’t.