“He just wants to play hockey.” Weisfeld — on a new contract, 41-year-old Datsyuk

“If you say not to go — don’t go!” Rene Higuita remember his famous gaffe 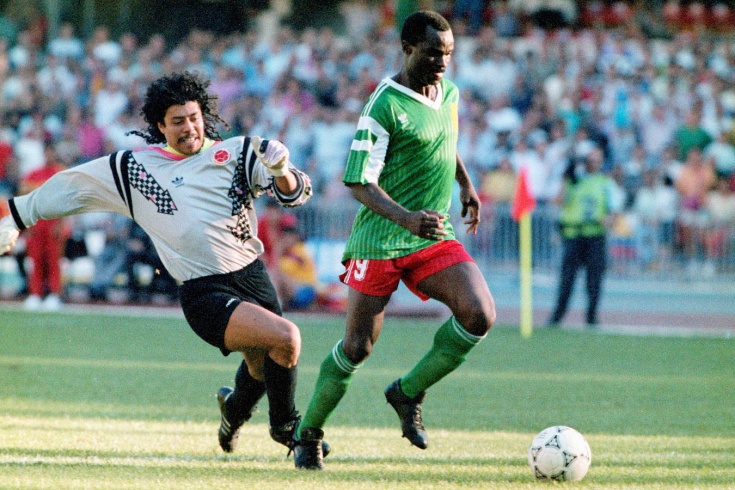 Former Colombian goalkeeper Rene Higuita always been eccentric. Yesterday in his Twitter he urged people to stay home because of the pandemic coronavirus, attaching a photo of the match between Cameroon and Colombia at the 1990 world Cup.

“Today, I have many times sent this picture. If this photo will help people to realize how important it is to share. The main thing — health. If you can stay home, stay inside,” wrote Higuita. Under the photo of the Colombian left signed: “If you say that it is not necessary to go don’t go”.

So Renee wryly admitted his mistake, which he made in the match of 1/8 final between Cameroon and Colombia in Italy 30 years ago. Higuita came out of the gate, deciding to go pass defenders. After delivery, the colorful goalkeeper not being able to properly accept and handle the ball. Renee tried to beat Cameroon striker Roger Milla, but he took his ball and sent it into the empty net. Modern goalies playing style is perhaps closest to Igita Manuel Neuer — the German, too, often takes the last defender.

And then the 1990 world Cup, the national team of Colombia lost to Cameroon with the score 1:2, and all three goals were scored in extra time. Higuita and the company left the tournament.

Roger Milla then told how he managed to fool the Keeper: “I was lucky with the goal because I was playing with the captain of Colombia Carlos Valderrama in Montpellier. And Valderrama showed me a video Higuita uses dribbling outside the penalty area. I knew that if I quick enough, you will be able to use it the error. And it worked!”

Despite the unfortunate incident, Higuita not change his style: he continued to play outside the penalty area, sometimes at great risk.

World famous Rene brought the “Scorpion kick” in a friendly match between England and Colombia in 1995. Even after 25 years, this trick looks very safely and effectively.

England midfielder Jamie Redknapp made a pass into the penalty area, and Higuita, instead of taking the ball in his hands, decided to play with their feet, making a spectacular jump. He folded his body and knocked the ball down, dropping it for a spin. The fans in the stadium became ecstatic, while Higuita calmly opened his arms to the sides.

After the match he apologized to his teammates for the perfect trick. “This attack was not a show off, but rather a necessity. I saw that the England player was in an offside position, saw the judge reacting to this point, but did not expect that the ball will fly in gate. If I tried to fight off his hands, then screwed it missed a goal. Save the feet turned out effectively and efficiently”, — explained his action by Renee.

Later in an interview with El Pais Higuita told me where he saw “the Scorpion kick”. “It was taken from a childhood game, then it came to training. I began to improve it and after five years decided to try.” Colombian goalkeeper believes that modern keepers will not be able to run such a risk today. “Blow of a Scorpion” will never be shown again. Today’s goalkeepers are not at risk as I used to,” Renee insisted.

Problems with the law

Higuita has never hidden his friendship with known drug trafficker Pablo Escobar, who is the footballer was frequently visited in jail. Once he even acted as a mediator between Escobar and the other drug dealer Carlos Molina. Renee provided the ransom by which the daughter of the last could go free. Molina also thanked Egito gave him $ 64 thousand

The legendary goalkeeper even spent seven months in prison. There he announced a hunger strike in protest against unlawful — from his point of view — conclusion. In the end, the Colombian was not charged and was released. But the world Cup 1994 in the USA the goalkeeper missed. Later, the player admitted that he did not know that he is committing a crime.

10 years later, in 2004, Ility in the body were found cocaine, for which he received a six-month ban on any football activity.

After retiring in 2009, Renee had not gone far from football. First it was the goalkeeping coach of the Spanish “Valladolid”, and then went to the Saudi “al-Nasr” where he continued to work in the same position. Higuita now coaches goalkeepers at home, in the club “Atletico Nacional”, and calls on Instagram to wear medical masks during a pandemic.

“He just wants to play hockey.” Weisfeld — on a new contract, 41-year-old Datsyuk