HomeФутболIvanovic is still the best defender RPL. But whether Zenit to renew his contract? 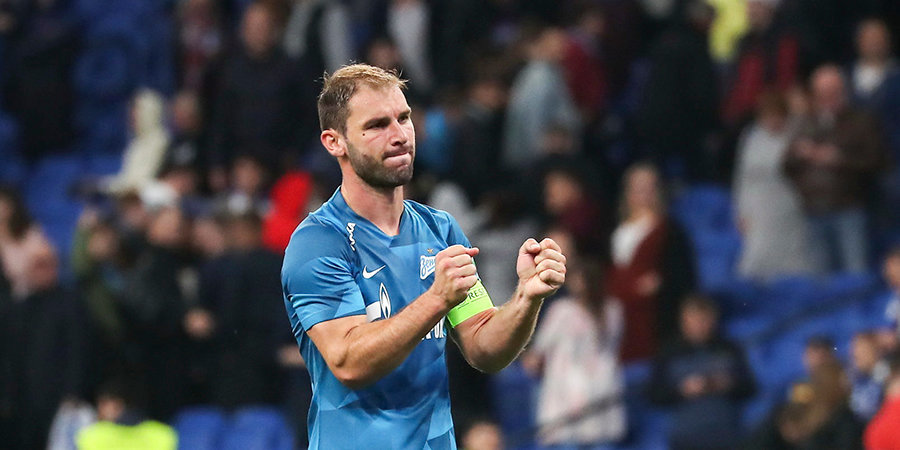 Branislav Ivanovic has come in “Zenith” in the winter of 2017 free agent after nine years at Chelsea. The Serb had already been experienced, even by the standards of Central defenders (33 years), so St. Petersburg has signed an agreement with him only two and a half seasons. The team has appeared the unconditional leader of the defense and the locker room, but everyone knew that after a couple years the government will have to find a replacement. However, this does not mean that the transaction was not successful during the allotted in the “Zenith” period I. managed to write his name in his story.

It is enough that he has spent as a part of Petersburgers 119 goals and on this indicator occupies the 35th place among the guards of the club. In the current team only three players often tried on the blue-white-blue uniform — Artem Dzyuba (167), Igor Smolnikov (195) and Oleg Shatov (197). And last season Ivanovic was a key figure of the team, which four years later regained its status as the strongest in the country. In the championship of Russia “Zenith” has played all rounds without substitutions, except for the two final, and deservedly was named the best Central defender of the season along with George Jikia.

In the current draw I. surely will again have a place in the symbolic team. Zenit in RPL is even better than in the previous season, after 22 rounds, gaining five more points and conceding just 10 goals instead of 21, the company informed. The Serb also played 21 games with the captain’s armband, conceding only meeting with the “Ufa” (0:0) due to suspension. In addition to reliability in defence he showed good goalscoring qualities, participate with goals in victories over Rubin (5:0), “Ural” (3:1) and Dinamo (3:0). Together with Yaroslav Rakitskiy 36-year-old Serb were definitely the best bunch of Central defenders in RPL.

But would be great not looking Ivanovich, it is impossible not to take into account his advanced age. Certainly, the veteran would be able to play at a high level another season, but gradually will begin to leave. In 37-38 years old to play in the RPL and the Champions League is very difficult, even if the injury will bypass the player’s party. Do not forget that Ivanovic is one of the highest salaries at the club — about 3.2 million euros, according to media reports. In terms of the impoverishment of the football because of the pandemic, this salary becomes the age of the player “Zenith” luxury. Therefore, in January reported in the press, the leadership of St. Petersburg offered the Serb a contract under the scheme “1+1” with reduced financial conditions.

I. the terms of the new agreement, like, not staged, although the defender to comment in the media refused and just expressed the hope that cooperation will continue. In the months that followed, rumors around the contract Serbs appeared regularly until the Serbian newspaper Sportski žurnal was not informed about the failure of the negotiations. The news was picked up by Russian colleagues, which the General Director of “Zenit” Alexander Medvedev had to comment on the situation.

We do not conduct with anybody negotiations about extending or signing new contracts until then, until you win the championship of Russia of this season, — quotes Medvedev Sport24. — If you need to wait until the last match, we’re going to do it. To write that we don’t agreed… This is not true, because the talks with Branislav was not conducted, as with other players. Negotiations with players will be conducted after those events, which I already said. Rumors about the contract Ivanovich have no reason.

It turns out, the fate of Ivanovic will be decided after July 22, when it will be played the last match of the championship — in the “Rostov”. It is not excluded that it will be sooner, as “Zenith” has every chance to make the title with several rounds to finish. By the way, in addition to Serb, the club can leave Mikhail Kerzhakov, Yuri Zhirkov, Oleg Shatov, Igor Smolnikov, Daler Kuzyaev, Yordan Osorio and Artem Dzyuba. All contracts end at the end of the season, and according to Medvedev, none of them yet has not received proposals on the extension of cooperation. In the case of parting with such a large group of players “Zenith” will do well to go on the market, to close the holes in the squad.

As for Ivanovic, the club just have to buy a new Central defender if the veteran will release a free agent. In reserves of Petersburgers are not detected by someone who is able to smoothly replace one of the leading players on the team. Good “Zenit” and so we need to increase competition in the centre of defence, as in the case of care Osorio on the bench will only Emmanuel Mammana. Initially, the Argentinian was bought as a future leader of the defense, but serious injuries dropped him to the rank of reservist. Maybe for a fourth season he will justify the invested 16 million euros?

It turns out that the Central defender is a priority goal for Zenit in the summer transfer window. While in the press flashes are not many potential recruits leader RPL, but this is not surprising, as the whole world is now busy with other problems, but football is almost all just coming out of pause. However, some media say that St. Petersburg is interested in the candidacy of another renowned veteran David Louise, who is ending his contract with Arsenal. 33-year-old Brazilian would be a good replacement Ivanovich, but also only short — term-for a couple of seasons. In addition, the defender probably will ask for “Zenith” not less salary, so it would be logical to find a player with more modest appetites.

The most recent rumor touches a player of Schalke and the national team of Turkey Ozan Kabak. 20-year-old defender will cost much more, Louise (estimated value — € 29 million), but with his help, the club will solve the personnel problem in the long term and in the future will be able to earn well. The big question is, will there be enough “Zenith” means to carry out such a transfer, but in any case it is better to look for a young and promising player than to take another veteran, even with the regalia.