HomeFootball“Krasnodar” beat summer costs. The results of the transfer Windows in RPL

After an extensive summer transfer campaign for the Champions League the bulls, to fit in with financial fair play and unload a statement distributed to players of almost 19 million euros. 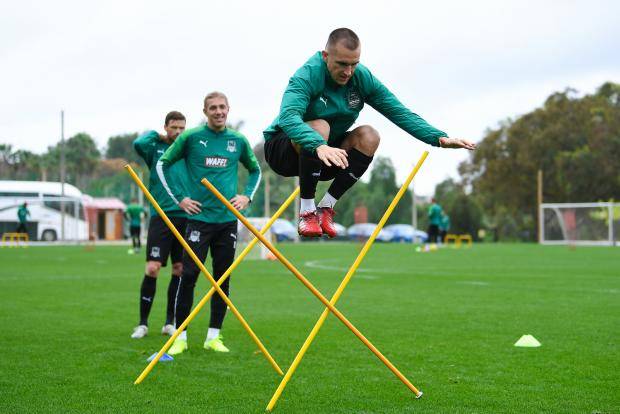 In Russia closed the winter transfer window. Despite the fact that most of the transitions concerned are free agents or loanees, according to the results of the Russian clubs were in the black for 8.2 million euros. This is not the best result (for example, in 2017, profit was $ 24.6 million), nevertheless the trend is clear – only one of the last seven winters the national team was in the red (two years ago), whereas previously the balance was almost always negative. This is due to the transition to the championship “autumn-spring”, because the main expenses are always at the beginning of the season, when his course is only cosmetic repair.

This winter is striking the almost complete absence of major expenses. A total of 16 RPL clubs paid for new players 19.2 million, of which 7 million were spent on the transfer of Ivan Ignatyev from “Krasnodar” in “Rubin”. This is the lowest figure over the past five seasons and the second – for the past 18 years. Financial crisis, anyway, is obvious.

However, the total score of the season (i.e. the last two transfer Windows) winter positive balance of almost had no effect: minus 160,7 million – the second largest negative balance in the history of RPL. Most were only in the 2012/13 season (minus 246,4 million), when Zenit bought Hulk and Axel Witsel.

Although over the last five seasons domestic clubs only the second time are unable to go to zero, the total balance for this period totaled 113.8 million the matter is that the largest expenses last summer: EUR 236.9 million – the second highest level in history. Most were only in the summer of 2013 (283,6 million), when “Dinamo” wholesale taking of “Anji” Alexander Kokorin, Igor Denisov, Yuri Zhirkov, Christopher Samba and others, and “Loco” brought from Makhachkala Mubarak Boussoufa and Lassana Diarra. Best of all winter work “Krasnodar”, weld for four players (Ignatyev, Christian Cueva, Dmitry Skopintsev and rental Younes Namli) 18.8 million and not spend a dime. The second indicator of “Zenit” earned on the departure of Matthias Kranebitter in “Monterrey” 5.9 million Robert Mak left Russia for free, and Kokorin went to rent in “Sochi”.

Both clubs are also United in their desire to strengthen the composition due to the return of the leases of one of his player. In Krasnodar back protector Yegor Sorokin, and in Petersburg midfielder emiliano Rigoni. The other clubs are unable even to cross the mark of 1 million – no income, no profit.

Most of all winter is spent “ruby” (8.2 million) and “Dynamo” (7.8 million), but it is worth considering that Kazan has signed eight new players, while Muscovites – only three.

Even without monetary transactions “Arsenal” (five players came in, two are gone) and Orenburg (three came and went). Zero transfer balance and “Spartak” but he rescued 500 thousand for rent Pedro Roshi and spent it on rent Alexander Sobolev.

“Loco” is only one change in the composition

Highest turnover in “Tambov” (nine players have come, gone 10) and Rubin (eight – seven) and the smallest at the “Locomotive” (left CSKA Moscow) and “Ufa” (come Oston Urunov and Emil Agalarov).

Among the leaders of the standings most of the seeded players of CSKA and “Rostov” (six), and they took just six players for two, and still both were in a small minus. “Rostov” has spent 250 thousand euros for Maxim Osipenko from the “Tambov”, and the army 500 thousand on Ilya shkurina and 130 thousand in the 17-year-old Nikita Kotin. Only five of the leading clubs of RPL was supplemented by six players (counting back from leases). This is less than took only one “ruby”. In the two transfer window have spent “Zenit” (66.7 million), “Dynamo” (43 million), “Spartak” (42.5 million) and “Krasnodar” (30,4 million). And none of these clubs failed to get a plus. Moreover, “Zenit” (minus 44 million), Dynamo (minus 41.9 million) and “Spartak” (minus 23.6 million) have the largest negative balance. Particularly impressive is the difference in income and expenditure blue and white – 43 million spent and only 1 million earned. And this despite the fact that the team left on 19 (!) players with a total value of 17.3 million

All three clubs have a trade surplus, and the Ufa generally earned more than 7.8 million They successfully sold Dmitry Zhivoglajdova (2.5 million), Danilo Circular (2 million), Igor Sarov (1.5 million), Erkebulan Seidakhmet (0.3 million) and sent in rent in “Dynamo” Sylvester Egbuna (1.5 million). And unlike the other two clubs, FC Ufa not only out of the relegation zone, but on the contrary, divides with Arsenal sixth European Cup place. And least after the “Locomotive” (12 players came 13 left) the turnover in the League (15 – 13).

Also commendable “Rostov”, earned on the transfer market 3.1 million, and “Orenburg” (2.1 million). Just in positive territory at the end of both transfer Windows were only five clubs from RPL 16.

The most profitable to sell their players “Zenit” (22.7 million), “Krasnodar” (20.3 million) and “Spartak” (18.9 million), but generally without the transfer of revenues cost “Sochi” and “Arsenal”.