To 76th minute the bulls fought in Spain, but, conceding the first goal after a corner, stopped playing and ran into a rout. 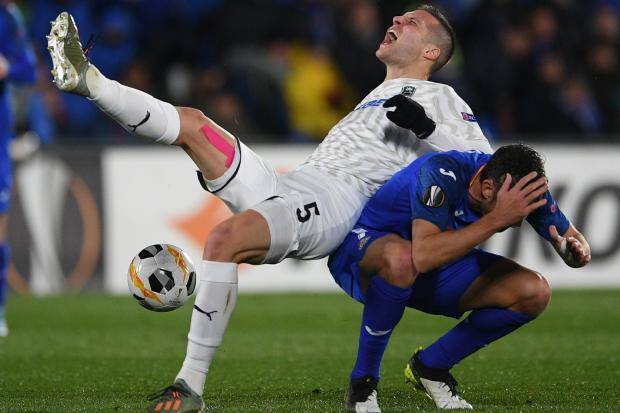 Loading…
LAST CHANCE FOR RUSSIA TO THE NEXT STAGE

“Krasnodar” the final round was the last Russian club kept the chances to continue struggle in the European competitions. This in our teams has not happened since the 2004-05 season. Then in the spring part broke only the army, but finished the campaign with a triumphant victory in the final of the UEFA Cup.

The difficulty is that in the final round the bulls to exit in the playoffs of the Europa League had to win, “Getafe” in his field. Too many of the residents were lost at the start, having lost to “Basel” and “Getafe” with a total score of 1:7.

This positive experience was with CSKA in 2011. Then red and blue to reach the playoffs of the Champions League must win in Milan against inter, thanks to goals from Seydou Doumbia and Vasily Berezutsky has managed to achieve. Unlike the Spaniards, with inter in that game was not motivated because already issued a victory in the group, however, as we know, this is not the key factor. On Tuesday, the same inter in the final match lost on the field decide their tournament tasks “Barcelona” (1:2). So despair not worth it.

Far more unpleasant is the fact that Murad Musayev could not count in this game, the main figure in the attack Ari. In the previous round, the Russian, the Brazilian was the protagonist, scored with a penalty the only goal in injury time was removed, completing, thus, the season before partners and cool they are substituting.

In his absence Musaev decided on a sudden shift from the usual 4-2-3-1 formation to a 4-4-2 with Ivan Ignatyev and Marcus Berg on the edge. At the center of the field replied Ari and Tony Vilhena, and Christopher Olsson, Ruslan Kambolov and Daniel Utkin remained on the bench. Very risky coach’s decision, who decided, apparently, mirror the model of the Spaniards, which had no staffing problems and ready to put our best squad.

The head coach of Getafe Pepe Bardales also tried to surprise the opponent. In comparison with the match against “Trabzonspor” he made the basis of as many as eight (!) changes, including left in stock goalkeeper Leandro Chichizola, who played all the previous five rounds. The attacking scheme the guests should not be misleading. The Russians started the game very carefully, a large force back. This contributed to the fact that the Spaniards from the first minute seized the ball and, knowing the love the bulls play short passing, not allowed to freely out of defence. Particular attention Gazinskaya, through which the residents develop the attack in the initial stage. As a result, the ball Russians did not keep and go to casts Ignatieff and Berg they were not allowed integrity.

However, to benefit from the visual advantages of Getafe failed. Even before the chances Stanislav Kritsuk (again, it is replaced in the frame of Matthew Safonova) it almost never came. Accented first attempt to break through the goalkeeper from the penalty mark carried out Cucurella, but the ball bounced off Martynovich went out for a corner.

As the game went, the players began to get nervous, and on level ground almost formed a mass skirmish. Damian Suarez hit on the flank by Wánderson and started to say something to him, lying on the lawn, to show. To help rushed Uros Spajic and supported him Gazinskaya. As punish after a skirmish we had representatives of both teams, the referee from Germany, Daniel Siebert made the Russians totally unjustified warning, hanging of the main breakwater “Krasnodar” in the center of the field on a yellow card.

On the other hand, we’re lucky that Siebert did not punish Spiech, because otherwise it was removed at the end of the first half, for what he dismissed in the middle of the field from the opponent in non-gaming episode. If desired, even for the very act it was possible to show him a red card, but referee Serb regretted.

A LOT OF WRESTLING, A LITTLE FOOTBALL

Guests start. In an ordinary episode and almost began brawling Vilena, but fortunately, the visitors managed to translate his fighting spirit in football plane, and now joining the attack, Sergei Petrov famously gave the penalty to the oncoming Ignatiev. It is a pity that the Russian to the ball a little bit not reached. In this episode all the same, Suarez hands pushed the attacker, what signaled and Sergey Matveev (it is officially the head coach of the bulls), but the referee was adamant.

But overall it was an isolated moment. The rest of the game was broken into episodes. In 36 minutes the team broke the rules 17 times, that is fouled almost every two minutes. The Spaniards were satisfied with a draw and, as a consequence, lower the game speed with constant stops too. Moreover, in horse-fight they had a distinct advantage.

So the hosts and created the most dangerous moment for 45 minutes. Rodriguez, angel responded to a long pass from deep and threw the ball to the oncoming Jaime Mata. Kritsuk seemed to have lost the gate, but set the strike of the attacker, which he obviously did not happen. In the end, the first half ended, in General, naturally in a goalless draw. But the advantage was with the Spaniards, and to understand how the “Krasnodar” is going to win, it was quite difficult.

Early in the second half, the pressure of the hosts did not let up, which did not allow Russia to be on the ball. Defenders opponents blocked as Gazinskaya with Vileroy, and during the initial stages of the attack remained stalled. Finally and irrevocably from the game, Magomed Shapi Suleymanov fell. Did not open up, rarely received passes and losing possession at the stage of processing of long passes. Too unusual was for Shapi football “Krasnodar”. In RPL, the team is almost always playing with a ball. Musayev also came to this opinion, and for half an hour before the end it was replaced by Younes Namli.

Forces for the vigorous pressure of the players, “Getafe” didn’t last long, and after 10 minutes they slowed down. “Krasnodar” began to overcome the middle of the field and occasionally get close to the opposition penalty area. Most notable was the main creatives, Anderson and owner of a very strong impact in the team Vilena. He recalled his long-range shot, a broken Soria on the corner, and was generally quite active in front, but most of the episodes or took the wrong decisions, or have made a technical marriage. But tried very hard.

Seeing that the starting plan is not working, Musaev went back to the usual arrangement, which has replaced the diligent, but not get to the ball Ignatieff on another pupil of Daniel Utkin. However, as subsequent events showed, the coach of the bulls made a mistake.

15 minutes before the end of the “Getafe” in his favorite style opened the scoring after a corner Jaime Mata threw the ball to the far post where the time was Leandro Cabrera. Standards generally trump team Bogalusa. In the championship of Spain from a corner they scored more than six goals.

After that goal, “Krasnodar” just quit playing. In the remaining time the owners have created moments for two or three games, and twice struck Kritsuka. First, the defenders lost in the middle of the box and Jorge Molina, shutting the flank of the Nom, and then he slept Kritsuk shot from outside the penalty box into the near corner of Robert Kennedy. It is significant that both came from the bench. That is, Bardales substitutions right, Musayev – no. As if realizing the hopelessness of the struggle, Aleksandr Martynovich received a second yellow and left the field early, giving partners the opportunity to suffer until the final whistle.