HomeHockeyKvartalnov refused the Cup of the continent. CSKA won the regular championship

Ended the regular season. In the last game before the playoffs the day of the “AK bars” refused-the continental Cup, which was won by the current holders of the trophy, as well as Gagarin Cup CSKA. 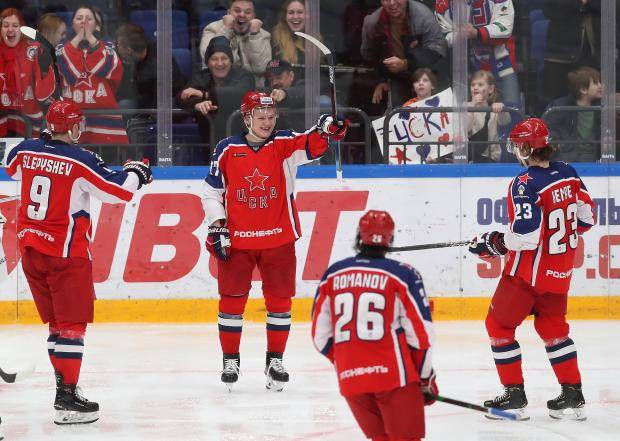 The participants of the playoffs decided on Tuesday. And to the East and a couple in the first round. Looking forward to the battle of last year’s finalists of the conference “Avant-garde” and “Salavat Yulaev”. In the West until Thursday the issue of “who is who” was uncertainty.

CSKA after defeat from SKA immediately showed intent, and in the first period have thrown three washers in the net Sochi “leopards”. The same in the second and stopped. The vagaries brought a personal score to 33 and, like last season, excelled to win the race. Let me remind you, Russian Rocket Pavel Bure in the last USSR championship, scoring 35.

In the meantime, the first team East of “AK bars” personally refused to accept the Tuesday the gift of the SKA. The team Dmitry Kvartalnov lost at home freed from the tournament aims to “Motorist” and CSKA Moscow – the continental Cup. Really in Kazan still believe in the curse of the Cup winner of the regular championship?! CSKA a year ago took it off.

Note 19-the summer goalkeeper of the Urals Galkina, adequately replacing landed in the hospital Covaria. That is almost worthy of the symbolic team of young players (under 21) and not spare the goalkeeper of “Vityaz” Kochetkov, who began the season in the SKA, but the advances are not spent.

“Locomotive” staying “the sixth track,” arrived in Podolsk without foreign players. The owners could choose an opponent in the playoffs CSKA or SKA. With those and other army knights already had the Cup thing, hopelessly behind in both series 0-4. It seemed that the team of Mikhail Kravets chose Saint Petersburg. She led 4:2, but the young railroaders scored account. However, after Bulletin shootout the hosts booked tickets to St. Petersburg.

Without the injured captain Alexander Semin – he dropped out before the end of the season – and without that small chances of the “Vityaz” into microscopic.

But all those battles of local importance. Fans of Moscow “Dynamo” and “Spartak”, with bated breath, watched the events in Minsk. And there… the Team of Vladimir Krikunova arrived in the capital of Belarus with their leaders Vadim shipachyov and Yashkin, while visiting Paris the previous match with “the Tractor”. Guests were 2:0 and 3:1, but the “bison” broke a hat-trick by veteran Kostitsyn Sr., his initiative was supported by another veteran – the Pavlovich. And 1:3 miraculously turned into 4:3. Against this background, faded 31st goal yashkina.

What follows from this? Should Derby – Moscow, iconic, “Dynamo” – “Spartak”. Znarok against his former team, with whom he twice won the Gagarin Cup, having caught up on the titles of founder of the club by Arkady Chernyshev. There is a new believe, a bright page in the history of the Gagarin Cup! And the fans are blue-white and red-and-white will be happy. They don’t have to rush for your favorite teams in Yaroslavl and Helsinki.