HomeТеннисLooked like Dementieva, Sharapova and other Russian winners of the Olympic games in triumph 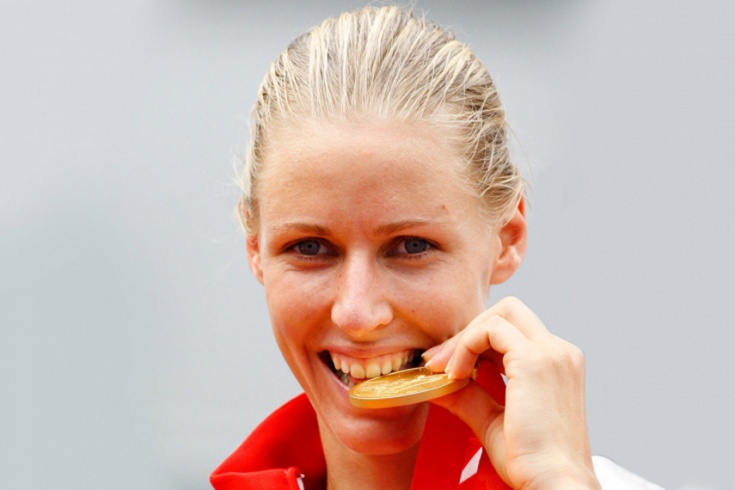 The first success of domestic players in the Olympics was in 1992, when Barcelona representatives of the United team – Natalia Zvereva and Leila Meskhi won a bronze medal. Since then, the Russian tennis player brought in a moneybox of team 7 medals of different advantage.

Successful was the debut of 18-year-old Elena Dementieva at the Olympics in Sydney in 2000. The Russian was able to get to the final, beating along the way such famous players as the Swiss Mirka Vavrinec (later became the wife of Roger Federer), Dutch Kristy Bogert, Slovak Karina Habsudova, Austrian Barbara Shett and Australian Elena Dokich. In the final match of Dementieva against American Venus Williams, who by that time had become a tennis star. The success of Venus, which won the gold. And Elena Dementieva in 18 years, won Olympic silver. Bronze went to another superzvezda world tennis – Monica Seles, representing the USA. 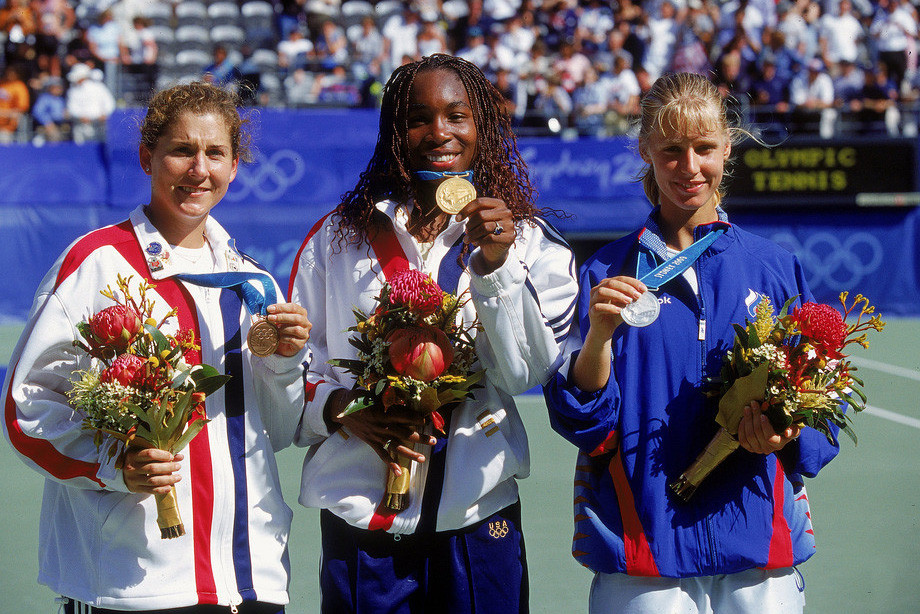 After 8 years Elena Dementieva has added to his Sydney silver and even gold of Beijing 2008. She has got a very complicated mesh. First she beat Ukrainian Kateryna Bondarenko, then Swede Sofia Arvidsson, followed by was stronger than the Danish Caroline Wozniacki. But in the quarterfinals, Dementieva, as in Sydney, had a meeting with Williams, but this time with younger sister Serena. The Russian was able to tie the score 0-1 in sets and defeat the formidable American (3:6, 6:4, 6:3). Thus, Elena was stopped by Serena Williams in a step from medals at the Olympics in Beijing. 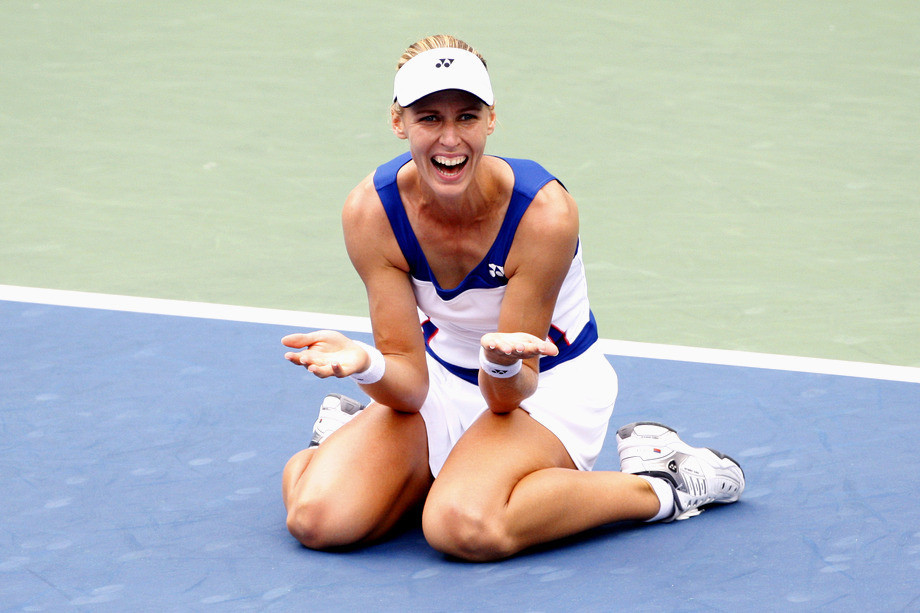 In the semifinals, Dementieva was expecting a battle with another Russian – Vera Zvonareva. Girls fought for the right to play in the final match over two hours. In the end, turned out to be stronger Elena – 6:3, 7:6. The final too was a Russian – Dementieva met with Dinara Safina. And again, as in the quarterfinal with Serena, Elena lost the first set and was forced to catch up with the competitor. It succeeded – Dementieva won in three sets (3:6, 7:5, 6:3) and became the first Olympic champion of Russia on tennis. 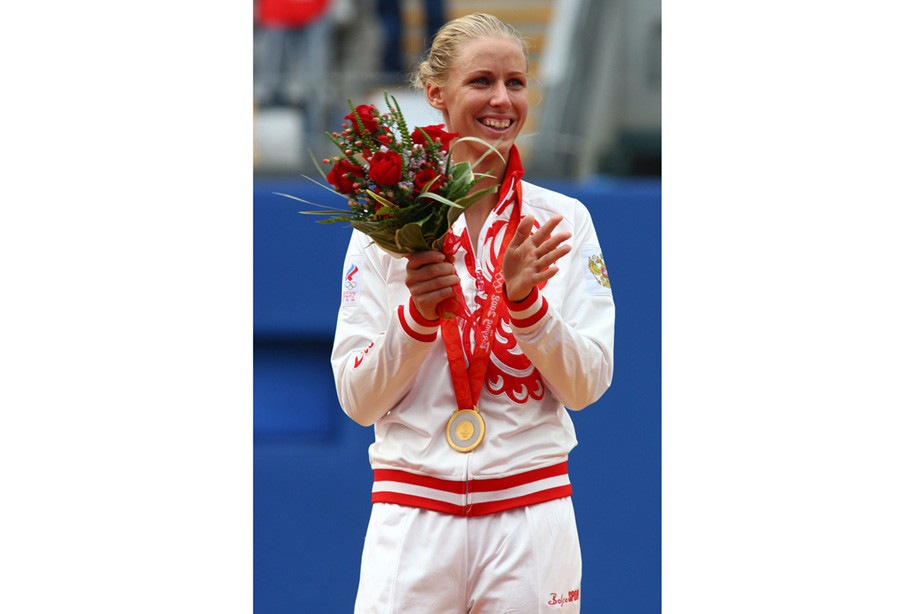 The way Dinara Safina to the final was also difficult. Rossiyanka in the quarter-finals out of the way formidable Serb Jelena Jankovic, seeded second (6:2, 5:7, 6:3). And in the semifinals, Dinara had a duel with the mistress of courts – Chinese Li na. The organizers did not spare the Russian player who still played in the doubles with Kuznetsova, and put the matches dinars close to each other, not leaving her time to rest. But she survived, coped with the Chinese and did not let her in the finale (7:6, 7:5). 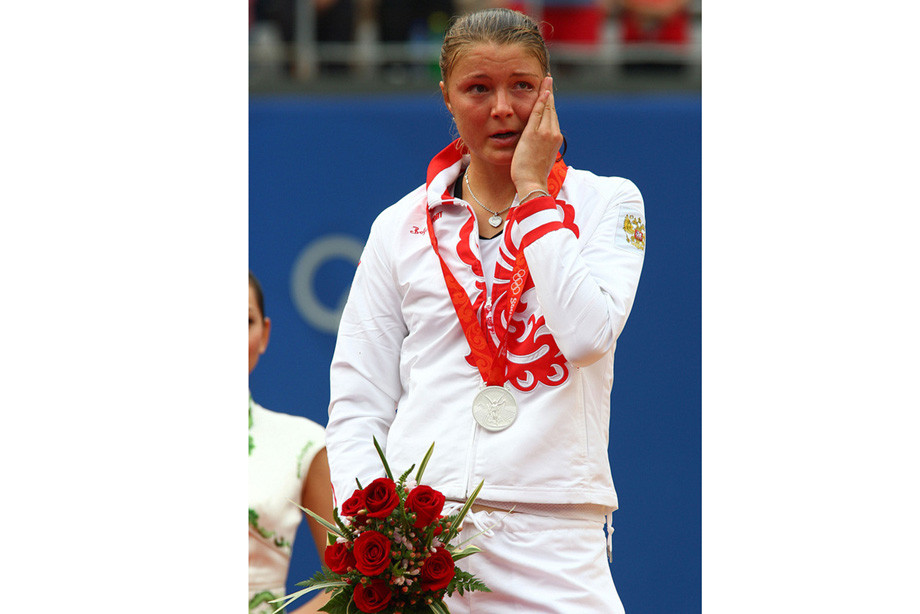 Vera Zvonareva in a single mesh of the Beijing Olympics, could not get. It was declared only in doubles, but when Maria Sharapova because of a shoulder injury was forced to withdraw from participation in the Games, it just replaced Zvonareva. Faith was able to reach the semifinals, only losing to the future Olympic champion Elena Dementieva and the match for third place with the Chinese Li na, Vera Zvonareva did everything possible to make the Olympic podium was entirely Russian (6:0, 7:5). Note that for the 28 years before the success of Vera Zvonareva her mother Natalya Bykova won the bronze medal at the Olympics-80 in composition of the USSR team in hockey. 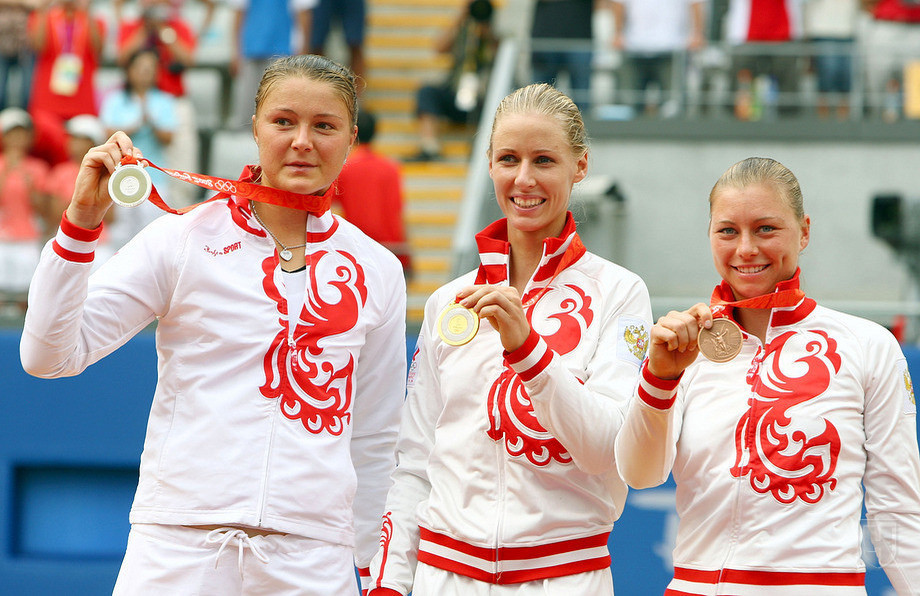 Completely Russian podium at the 2008 Olympics in Beijing is a unique achievement of Russian tennis. Since tennis returned to the Olympic program in 1988, no country, except Russia, has not managed to win all three medals in a single category at a single Olympics. Needless to say, Dementieva, Safina and Zvonareva looked at the Beijing podium real victors. 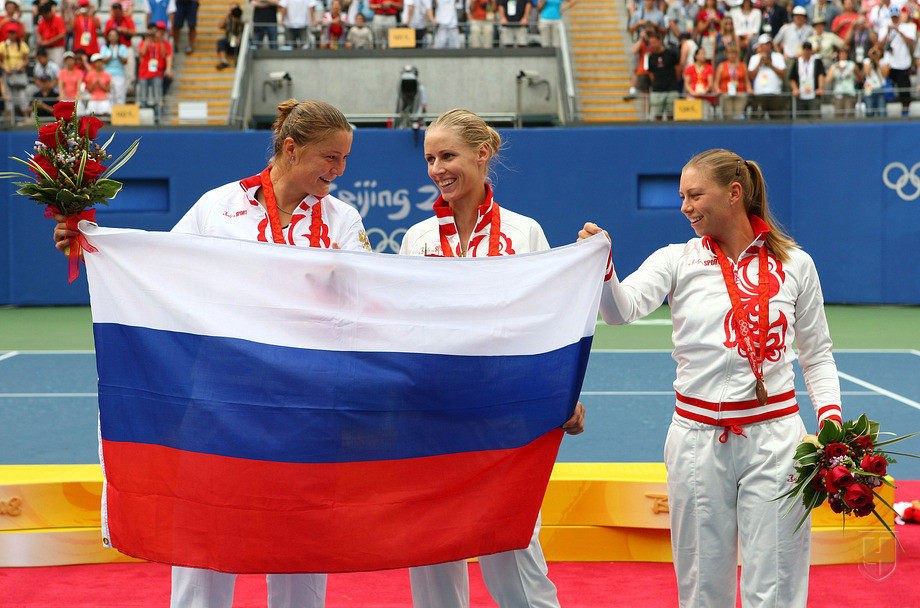 At the Olympics in London 2012 finally the third attempt was able to debut the Russian woman Maria Sharapova. In 2004 she won Wimbledon after the closure of the Olympic bid, in 2008, was forced to have surgery on his shoulder. And in 2012, the year for Maria, everything turned out well – she came into the net a third number. But before you start the performance at the tournament, Sharapova had an important mission. She became the first female Russian, which was entrusted to carry the flag of their country at the parade of the Olympics. 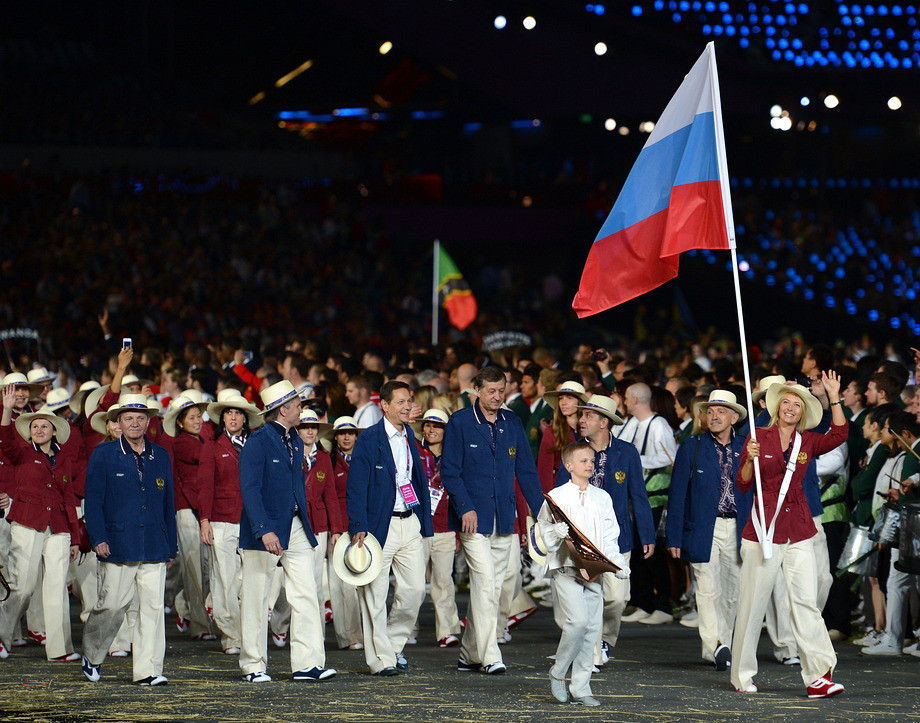 Hopes of the Russian fans Maria Sharapova justified. She successfully got to the final, guaranteeing team for an Olympic medal. During the tournament, Sharapova was knocked out of the grid such famous rivals as Israeli Shahar peer, the Briton Laura Robson, the German Sabine Lisicki, Belgian Kim Clijsters and Russia’s Maria Kirilenko. In the final on the grass of Wimbledon, Sharapova met with Serena Williams and lost to her in two sets (0:6, 1:6). Thus, Maria Sharapova won the silver Olympic medal. 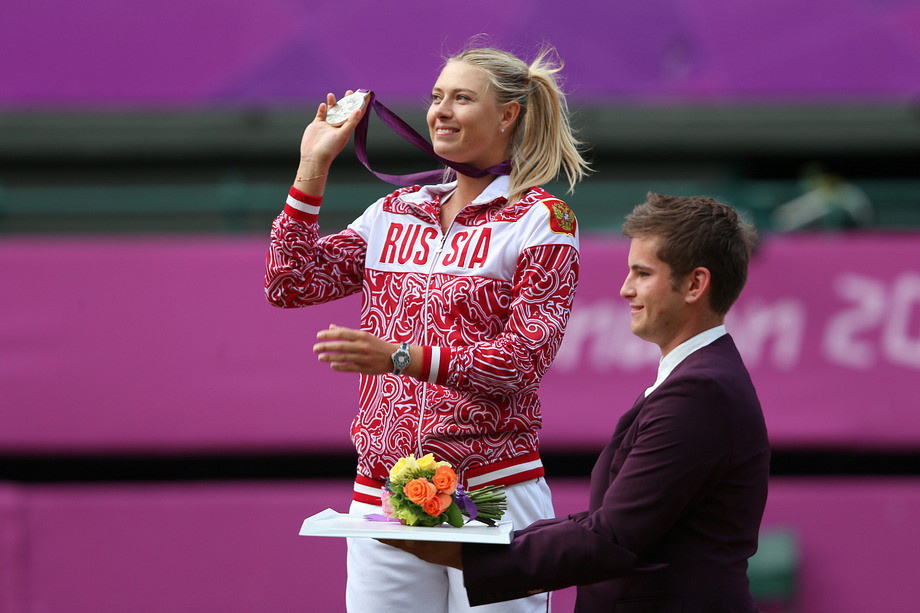 Maria Kirilenko at the Olympics in London after the defeat in the semi-final against Sharapova and lost in the bronze medal match, the Belarusian Victoria Azarenka. But Kirilenko was not left without a medal. In the doubles together with Nadezhda Petrova they reached the semi-finals, where they lost to the Williams sisters, and then in the match for third place was able to cope with the first couple of sowing liesel Huber / Lisa Raymond from the United States to win bronze in the Olympics. Add that to people here this medal is especially valuable as she was able to repeat the success of his mother’s Hopes Ilyina, which at the 1976 Olympics in Montreal won bronze in the relay race 4 x 400 meters. 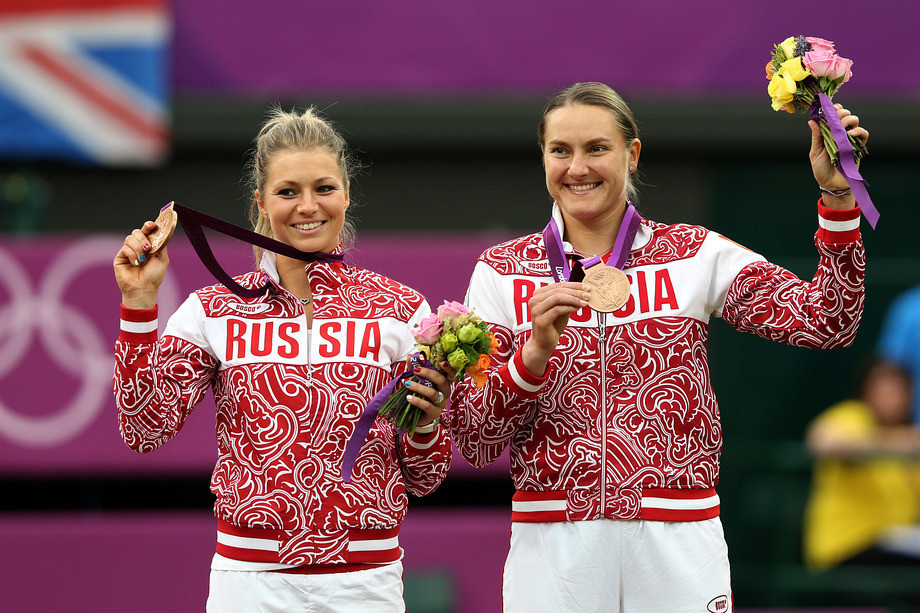 At the 2016 Olympics in Rio de Janeiro, the Russian tennis player has achieved another triumph. In that tournament, was not equal to the Duo of Elena Vesnina / Ekaterina Makarova. The Russians were the 7 seed, but had been able to cope with all competitors, not giving anyone any set. In the final match of Elena and Ekaterina defeated the Swiss couple – Martina Hingis / Timea Bacsinszky – and became the Olympic champion. 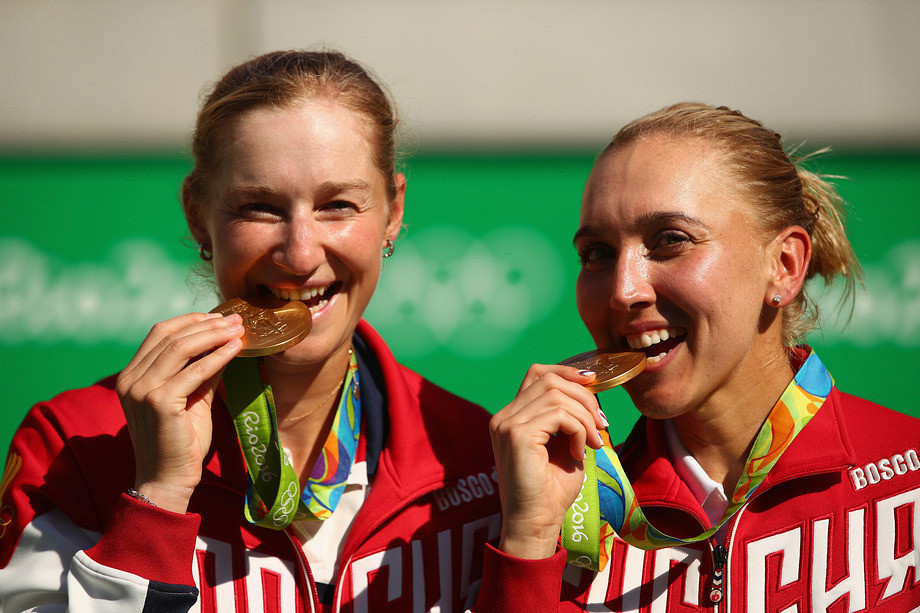