HomeФутбол“Manchester United” was on the verge of failure in Europe! The Danes forced him to play 120 minutes

“Manchester United” was on the verge of failure in Europe! The Danes forced him to play 120 minutes 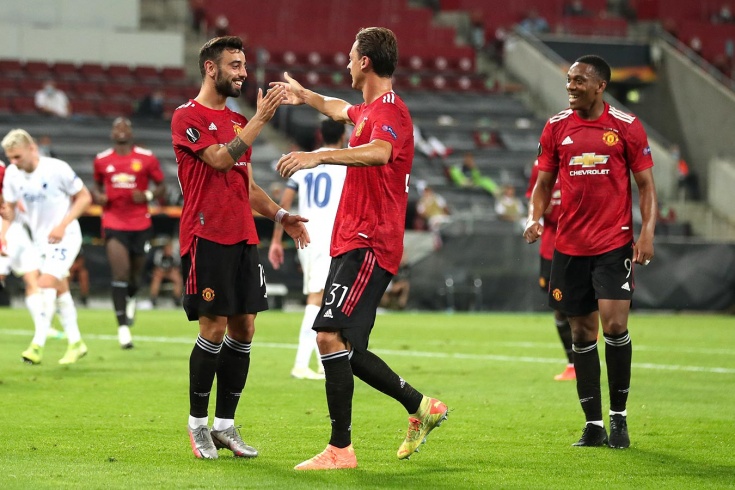 In the Europa League kicked off a crucial stage of the playoffs, which can be called the “final eight”. The quarterfinals, semifinals and a decisive match of the tournament will be held from 10 to 21 August in Germany. Monday decided the first semi-finalists.

Inter and Bayer gave a very entertaining match. The first 15 minutes was equal. Both teams did some good pressing, the Germans were not allowed to run up a crazy pair of strikers, with inter Romelu Lukaku – Lautaro Martinez. But then inter scored a goal, the creation of which took part both forward. Martinez clever through ball off of the episode two defenders, Lukaku struck (locked), and Nicolo of Barella with the selection struck the outside of his foot into the far corner.

After that “inter” several times tore the defense of “Bayer” due to fast attacks. One of them made up Lukaku. A powerful centre-forward received the ball in the penalty area, putting the back of the Jonathan One, and in the fall sent the ball into the far corner. If Lukaku was immediately sold out one by one, the team of Antonio Conte, led to large in the middle of the first half. The Belgian lost the duel Finn Lukas Hradecky, and in response to the star of the Germans Kai Havers, having played in the wall with Kevin Volland, reduced the expense.

Bayer a little luck. In this episode, and next when the judge appointed a penalty in gate of Germans for handball, but overturned its own decision by watching the replay. Daley Singraven played shoulder.

After the break inter had a lot of chances on counterattacks. Bayer couldn’t follow the speed of the opponent. Lukaku, who scored in his ninth consecutive match in the Europa League and set a tournament record (including performances for Everton in the season of 2014/2015), fresh, Alexis Sanchez and the other offensive players Nerazzurri had to make the result long before the final whistle. But the Italians did not score, and the intrigue lasted until the last minute. Sanchez got injured hamstring. In the end the judge a second time appointed, and abolished the penalty in gate “Bayer”, as the foul ball hit the hand of the player of “inter”! However, Antonio Conte’s side won a deserved victory.

Match “Manchester United” – “Copenhagen” in contrast to the game in düsseldorf has evolved, not so fast. In the first half the opponents by common efforts a couple of times struck the target (kicks 5:4, the target – 2:0). Manchester United on the rights of the team of a higher class control of the ball that possession was dangerous. Field Pogba was difficult to find a sharpening solution because when receiving the ball, he was often without support in “sandwich” between the Central Midfielders and attacking the Danes. Just before the break, “Manchester United” had a good attack ended with a goal by Mason Greenwood. However, the judge using the system VAR canceled a goal – offside.

The second half was more vivid. The advantage of “Manchester United” has grown 61% possession of the ball, the strokes – 12:5 (on target – 5:0). Manchester United were close to a goal. Mason Greenwood and Bruno Fernandes came into the bar, in other moments of goalkeeper Karl-Johan Jonsson rescued “Copenhagen”. However, the Danes have done, physically stood the entire 90 minutes.

But in extra time the team of OLE Gunnar sulsher still put the squeeze on the opponent. In the 94th minute, Juan Mata earned a penalty and Fernandes shot with a “point” in the left corner. In the remaining time “Manchester United” was closer to the second goal than the Danes to a draw, but the score has not changed. It was a difficult win the top club in the Premier League over Copenhagen.

Tuesday will be two more quarterfinals. In the semifinals, inter will play with the winner of pair “the miner” – “Basel” and “Manchester United” – the winner of the “Wolverhampton” – “Seville”.