Anisimov brought “to Ottawa” a victory in overtime. Gorshkov scored in the first game in the NHL (video)

HomeTennisMedvedev: I hope that I will win a few matches at the final tournament ATP

Medvedev: I hope that I will win a few matches at the final tournament ATP 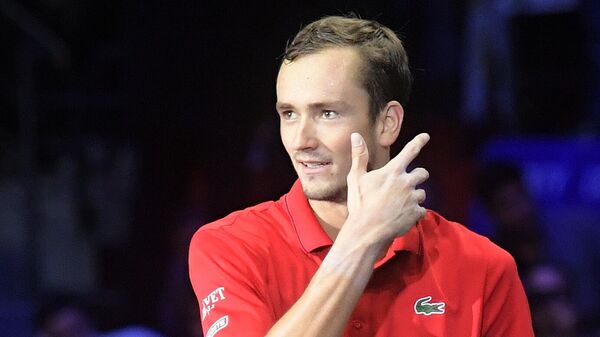 The fourth racket of the world Russian Daniil Medvedev said that he would try to show good tennis and win some matches at the final tournament of the Association of tennis professionals (ATP), which will be held from 10 to 17 November in London.

The draw opponents 23-year-old Medvedev in the group of Andre Agassi will be the Spaniard Rafael Nadal, Greek Stefanos Zizipus and the representative of Germany Alexander Zverev. The last time the player participated in the final tournament in 2009, when Nikolay Davydenko became the winner of the competition.

“I think all of us young Russian players, saw the victory of Davydenko. It was amazing, he is the only Russian who won the final tournament. I am pleased that I will represent my country, and I hope that I can just to show good tennis and win some matches”, – quotes the words of Medvedev, site ATP.

Last week, Medvedev has not managed to overcome the stage of the second round of the tournament series “masters” in Paris, losing in three sets to Frenchman Jeremy Chardy.

“I’m still confident in his game. Paris is not the result I wanted, but it does happen, it’s tennis. Geremi had a great game. I had my opportunities but I didn’t use them. In every match you play, you can lose or win, no draw or anything like in other sports. This time I lost, but I know that if I manage to be in top form Monday – that’s what we’re trying to do now with the team I have a chance to win,” he added.

Bertens second year in a row won the tournament in St. Petersburg

Anisimov brought “to Ottawa” a victory in overtime. Gorshkov scored in the first game in the NHL (video)