Daniil Medvedev for the first time in his career he reached the quarterfinals of the tournament “Grand slam”. 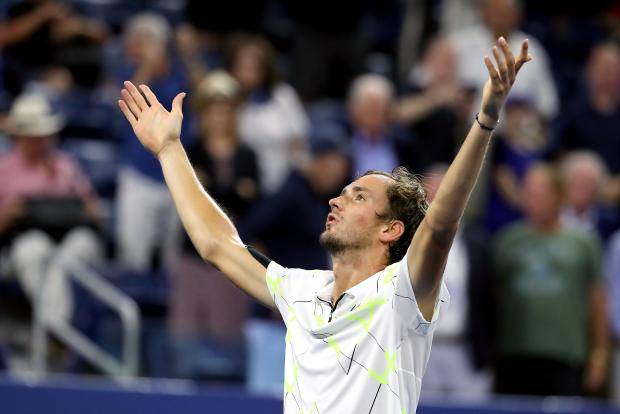 – It’s hard to think about victory on “major”. I’m on the “Big hats” in the quarterfinals was not! Need to begin to reach this stage. If possible now would be good. Not to say that I will live happy. But happy – Yes, – told Medvedev on the eve of the tournament. When just arrived in new York after winning in Cincinnati and new the status of the fifth racket of the world.

However, the US championship to Daniel with the first round began to get difficult.

And it’s not even in the rivals as such. They just carried a little – known Indian pragnesh of Munneswaram, then – Bolivian Hugo Delien, never won on hard courts in big tournaments. Feliciano Lopez was far more dangerous, but because he is 37 years old… And German Dominik Koepfer in the fourth round in fact, few thought to see. Perhaps even including himself. The guy before US Open even in the top 100 did not appear – was only 118-th racket of the world. Never played for the first team “Hats”. Although no longer a Junior – he is 25 years old. Nevertheless, starting with qualifications, Koepfer has gathered pace, making his way immediately already the fourth round! And even so, someone thought it a real contender for Daniel?

The fact that Medvedev corny tired. Three finals in a row have not been without consequences. A week of rest before the US Open he missed. It was noticeable that fresh there that the speed of Daniel – fell. Hence the frequent mistakes, so unusual in its execution. And most importantly – the periodic nervous breakdowns on the court. Like what happened in the match against Lopez, when the Russians first snatched from the hands of Balboa towel, then entered skirmish with the judge, and then showed the middle finger stands.

What, by the way, turned the audience against him. Moreover, it seems – until the end of the tournament.

And more importantly, Daniel had problems with his health. Duel with Delena he has completed essentially on one leg (and somehow managed to win a whole set!). Terrible cramps were able to pay but only after the match. At a meeting with Lopez Medvedev came out with seriously zacapawanyi hips. To fight with the Koepfer – even with zacapavaniem shoulder.

And even in this state – with bad legs, diseased hand, not showing my best tennis and contrary to the mood of the public (which is the principle of noisy supported the opponent of Daniel), the Russians have achieved victory! Not without its problems. Trailing 3:6, 0:2. But he got it! And even danced after the last point… the way, for some reason, also called the roar of the audience. Well Yes, what do they care? – Before the match, I had pain in my hip. I had a sore shoulder. I took so many painkillers, but in principle could. Thought still will not play! And then lost the first set and began to play with a break early in the second. But you helped me so! The fact that I am rooting against me. It gave me the required energy. Thank you! And continue in the same spirit, – Medvedev turned to the fans on the court after the game.

About the same as it did after the victory over Lopez.

Well done, by the way! And ironically, and with humor, and dignity. Diplomat!

– Of course, in the previous match, I was acting like an idiot. Did some things not proud of. I’m working on that. Off the court I’m a good person. We must always remain the same, including the difficult moments. Today I was harvested. Tried to focus only on tennis. We both played well at the level of the top 10. And had a good match. Of course, I am very pleased that we have achieved victory, – has told Daniel at the press conference.

– Where did your dance?
I don’t know! I usually don’t act like this. I either lose and shake hands, then leave to the locker room. Either win, I think “I’m done!” and looking in the direction of his team. For some reason I prefer watching other people’s emotions than to show their. But today I was really very happy and decided to note its first exit in a quarterfinal “Helmet”. I was surprised by the audience reaction – I did not expect such a buzz. Believe me, the dance was not for the audience. But only for me.

– You said before the match I thought that you will not be able to play tonight. How did you feel on court?
– By the way, normal! Don’t know why – clans, pills or adrenaline, but I did not feel any pain either in the legs or in the shoulder. Although I do not know what will happen next. And I will be ready for the new game. And then Daniel is waiting for… No, not Novak Djokovic! Everyone was waiting for their eventual meeting in the finals, but the Serb failed to hand injury… He felt a strong pain in the elbow in the second round against Londero. Hardly continued performance in the tournament. But, giving two sets to Stan Wawrinka, still starred. And left the court – also under the stands hooting…

No, seriously, the new York public – what is wrong with you?

And Wawrinka and will now meet with Medvedev. And it is unlikely Daniel would be much easier with Stan than with Novak.