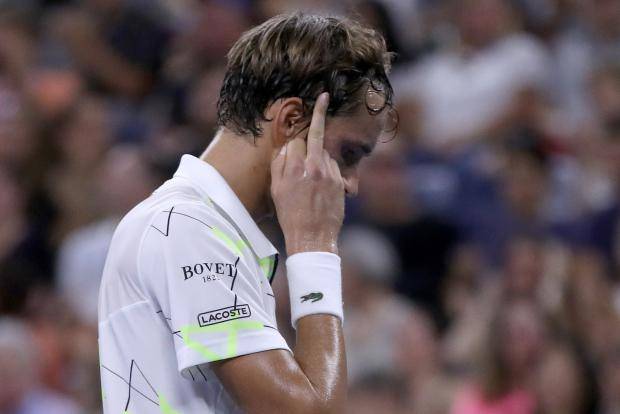 The match was, in fact, scandalous. Due to the behavior of the Russians.

For him it was scary. But initially, for a different reason. Your match of the second round against Hugo Delena Medvedev finished, struggling with a wild pain at the end of the third instalment of his right leg brought a strong cramp. In this situation he managed to win a very difficult question. But he did it! Proving that he has both the will and the character of a champion. Only one did not understand – what is the state of Daniel will be released for the match against Lopez. After all, time to rest was not so much about a day.

And Lopez is not Delen! The Bolivian prior to this US Open has never in his career has not won a match on hard courts (if we take big tournaments of the ATP level). And Feliciano is a recognized expert on fast surfaces. Hard and grass fit for him, much more than the soil, making the guy an atypical Spaniard. Moreover, in the 37 years he is in a fantastic form (in the physical), not so long ago took the title in London (no, not at Wimbledon, but also for important tournament – Queen’s Club), and new York managed to beat the strong American Taylor Fritz and typing course the Japanese, Yoshihito Nishioka. Against this on one foot “can get”! And if Medvedev once again faced with convulsions, purely on the class and it would be no victory could not achieve.

Fortunately, all went well. Daniel slept. Rested. Satapower both feet – just in case. And for the match against Lopez came out of it relatively fresh. Health problems had not arisen, although tennis players and carried on court more than three hours.

But having problems with behavior.

We knew that Medvedev can do it. It is not a good boy, not at all. Not once was the hero of scandals. At any time could hit him with a racket on court or to argue with the judge. Just recently this has happened less and less. And after Wimbledon (where because of their own “crazies” he lost the advantage in the fifth set and lost to Goffin in the third round) didn’t happen at all. Perhaps that’s why Daniel spent so confidently American summer series, playing three finals in a row and winning his first masters tournament in Cincinnati. What has changed in new York – no one, to be honest, I did not understand.

Perhaps some pressure on the “Big helmet” above. Maybe this is a consequence already poznakomivshis fatigue.

But in the eighth game, when the score was 3:4, leading 40:15 on her serve, Medvedev made two double faults. At this point, it went ballboy – bring a towel. But Daniel got against the guy, pulled out a piece of cloth from his hands and the evil thrown on the court (the towel, not Balboa). For which he received a warning from the judge.

When mom asks you to put your dirty clothes in the laundry room. pic.twitter.com/qGB9Vi35rS

This infuriated Medvedev even more. Throwing the racket, he went to argue with the referee. “Get down from there! Get off! Gink! You don’t have to sit there!” – shouted the Russian. That, of course, has not caused delight of the audience.

Returning to the game, Daniel lost this game, and Lopez led 5:3 and came to serve for the party.

Interestingly, having splashed out emotions, Medvedev sharply started to play much better. Then managed to make the break, not allowing the Spaniard to take the first set. And then played a double set point (true – on his serve). The fans began to actively support Lopez that only provoke the fifth racket of the world. In response, he sarcastically welcomed the bleachers clapping his hand on the racket. And at some point the sly, unbeknownst to the judges on the tower, showed the audience the middle finger.

Noticed not all. But see Director of television broadcast. And immediately brought the scenes to the big screen. Rostrum obladali… And blew a whistle! The umpire just shrugged – he saw time only in the replay and could not punish the Russians. So that gave him only a verbal warning (not official, which would result in loss of points). But the rest of the match, Medvedev is now fought not only opponents, but with stands. Who whistled, hooted, and strongly hinted – the defeat of Daniel them perfectly satisfied!

Tie-break first game, he took almost at zero – 7:1 (could have been 7:0, but made a double fault). Then another three sets hard fought Lopez, but still put the squeeze on the Spaniard at the end.

And then… started to thank the rostrum.

– Thank you. Thank you! – shouting into the microphone rose a rumble and a whistle, said the Russian. – Your energy brought me a victory! Going to bed, you know – I won only thanks to you. And the more you will do the same, the more I will win.

What can I say? A true diplomat! Who does not know – Medvedev studied at MGIMO. Yes, just one course, but nevertheless…

The only question is, do not affect whether the trolling and such behavior on the performance of Daniel then? In the fourth round he will meet one of the sensations of the tournament – the German Dominik Coppera (which is not included in the top 100). But then, if all goes well, a possible quarter – final against Djokovic…