HomeAutosport“Mercedes” fast but broken, Kvyat has a chance. The results of the tests of the Formula 1

Barcelona ended the pre-season tests of Formula 1 in the next time the teams will meet in two weeks, when in Melbourne will start the new championship season. As usual, the team did not disclose all of the cards until the start of the championship, however, some trends can be traced now.

The Achilles heel of Mercedes?

Mercedes was a clear leader in the first week of tests, but the second was successful for the Germans much more difficult. The problem came from not waiting for — from the reliability. The first signs appeared last week: one motor broke down on “racing point” and “Williams”, another replaced on the car of Bottas. The Germans then claimed that there is a small problem with ERS, but even then, there were rumors that more serious. Now the motor broke down again and the team lost almost half a day after Thursday only 61 circle — less than half of their regular program.

Not too convincing look satellites Ferrari: “Alfa Romeo” and “Haas”. Both teams passed this time, not so many circles, and speed is often not shone. And if Alfa Romeo can boast, for example, by the time Robert Kubica, who topped the protocols on the fourth day, the “Haas” the sum of the six days was the slowest. “Haas” is also inferior to all the others, and the number of passed two weeks circles. It was from all points of view difficult for the American team for the winter.

But “Williams” re-looked quite decent — drove a lot of laps (fourth place on the last three days of the race) and showed good speed (on Thursday, Nicholas Latifi scored the fourth time). So do not be surprised if in Melbourne George Russell released the second segment of qualifying. 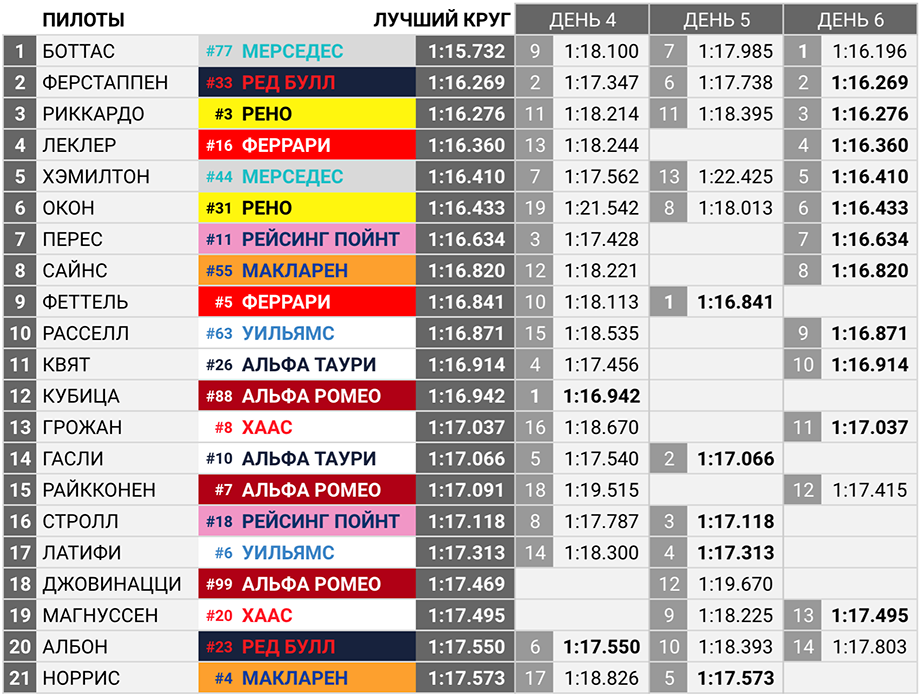 How would it look on a modern Formula 1 car without advertising. A very unusual sight

Kvyat wanted to get a coronavirus. How such a thing could be invented?!