Daniil Medvedev in the quarterfinals of the US Open was won by Stan Wawrinka, which provided him and the exit in the first semifinal of “Grand slam” in his career, and fourth place in the ranking ATP. 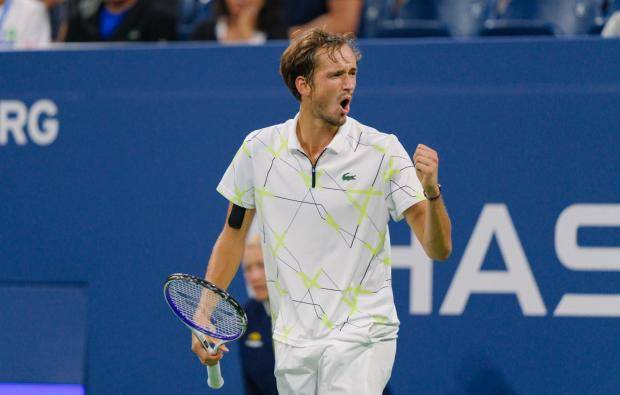 Okay, at this stage we expected to see Medvedev’s duel with Djokovic. At least, for two good reasons.

The first – purely sports. Earlier in the year Daniel had already given Novak battle on equal fought with him two games in the fourth round of the Australian Open. The only rivals to the Serb has managed at the tournament to snatch from him the whole set! Yes, we lost (like all the rest, including Nadal in the final). But made it clear – this season he’ll surprise. And subsequently, twice in a row caused Novak lose! On clay in the quarterfinals in Monte Carlo. On hard too – in the semi-finals in Cincinnati. Look at how the citizen – in its current form, with three finals in a row (and one title!) behind – will compete with the first racket of the world in a “Grand slam” was really interesting!

The second cause of sporty subjects. And Djokovic, and Medvedev managed new Yorkers off. Russian – shows them the middle finger during the match with Lopez in the third round. The Serb altercation with a fan during your workout. When an injured Djokovic, warming up before the game, I heard from someone “you will be removed!”, and rushed to sort things out. Fortunately, rapidly cooled. But still in the hearts of the left: “Hey, I’ll find you! Believe me, I find! We will communicate!”. Then, of course, tried to reduce everything to a joke (“I like It. Meant – find and we’ll drink beer with him,” said Novak). But no one was fooled. And in the stands, “flushing meadows” then it was met with whistles.

In the end, it was interesting to see someone in such a situation, the Americans are quicker to forgive. And for whom will be hurt in an internal meeting.

But no, it did not happen. A shoulder injury received by Novak in the second round, had an impact on his game. And losing two sets to Stan Wawrinka, he finished the tournament a failure – broke in the third set. Medvedev, all “bandaged” up to the quarter-finals reached – in class, on morally-strong-willed, due to the mesh. But Joker could not. Daniel eventually met with Stan.

What is still not promised him easy trips to the semifinals.

They have already met. Once. Wimbledon in the first round in 2017. Medvedev won!

It still really didn’t know. Yes, Daniel once played in the final of the ATP tournament (in Indian Chennai). Yes, looked quite promising. But who would have thought that after two seasons he will break into the top 10! And Wawrinka was the third in the world. At the US Open in 2016 took the third for himself “Grand slam” – since the “majors” all the titles took the guys from the “big 3” – Djokovic, Federer and Nadal. And, with all hands, looked a clear favorite. And the Russians still won.

It was only later we learned that Stan had problems with the knee. Which subsequently underwent surgery, missed many months and only am now able to return to the elite. More precisely, even not to return – and to indicate their possible comeback. Although he is already 34 years old.

Since then much water has flowed. The Swiss was gaining momentum. Played a quarterfinal “Rolan Garros” – in the current year. Closer to the top 20 (although at first, after a long pause, a long time often lost in the first rounds than really fought against strong players). But Medvedev gave a sharp jerk! Four titles last season to bring him closer to the top ten. This year it finally went out. And about the success of Daniel this summer and makes no sense to repeat. Finals in Washington, Montreal, Cincinnati, Ohio title and fifth position in the ranking on the eve of the arrival in new York say about everything. In the first place – on his fantastic form. The only disadvantage of this series – the fatigue of the player. Which was to affect his performance. And impact – in the form of convulsions, problems with hips and shoulder, he has faced at the US Open.

And then there’s the war with the public, which Medvedev himself had started (thus the middle finger shown to the stands in the game with Lopez), he developed (with words like “While rooting against me, I will win!”), he supported (ironic gestures “come on!” – in response to the roar of fans after a victory over Coppera). And he seemingly wanted to continue. And new Yorkers – because they are! Just give them a reason – a whistle, zaplyuyut!

Here and in the match with Stan Medvedev were in the minority. Swiss clearly supported. And Daniel tried to “crush”. Noise, hum and shouting by the arm. But… still I didn’t!

Oh, how many nerves cost us the match! Oh, how we worried!

When Medvedev, having made a break in the first game and taking the 40:0 in the second, played three doubles in a row (he seems, and he did not understand how it happened).

Then when called on court of the doctor. And he vigorously shook his femur. Tight. Powerful. With a clear hint at a serious muscular problems at the Russians.

When leading 5:3, Daniel lost the advantage at the break. Then when he led the tie-break 5:2, but gave Stanislas to win, to win four points and earn a set point. Cost – the Russians have coped with the situation and still took the party– 7:6 (8:6).

Double nine for the first set, too much optimism did not inspire.

But things will get better. In the second installment Medvedev was more focused to serve. Much better draws. Became less to go wrong. And problems in physics have not been observed – it seems that the pain is gone, and more Daniel didn’t touch anything. He confidently took the set from Wawrinka – 6:3. Then we lost concentration and Stan took the lead in the third game. Trailing 3:5, Medvedev 12 minutes, fought to the death on the pitch of the Swiss, but still wasn’t able to put the squeeze on at once. But Doge then in the fourth set. Devastating – 6:1.

And reached the semi-finals!

Stan long said something to the Russian, hugging him after the meeting. We have not heard the words. But, apparently, said something like: “For you, man, the future! You’re really cool!”

– On court Louis Armstrong you provoked the audience that was rooting against you. Told her “Thank you!”. Now, in the arena of Arthur Ashe, what can I say? asked Daniel after the meeting.

– Something like: “come on guys. Excuse me. Let’s live together!”, – Medvedev has smiled.

Not the fact that it has reconciled himself with the fans. But… What choice do they have? These guys need love!

And just a couple of facts finally:

– As much as nine years in the semi-finals of the “Hats” were not Russian tennis players – after Mikhail Youzhny at the US Open in 2010. Medvedev became the first.

Now he will surely overtake the Dominic Thiem in the rankings and will become the fourth racket of the world.

Do you know what for all that money? It is for these emotions! Who we are, looking at how our player beats with themselves and with their injuries, with stands and with tough opponents. And most importantly – when it wins.

Who’s to say he didn’t deserve them?