HomeХоккей“Pedals mixed up, and maybe you did it on purpose”. The accident broke the Russian five

“Pedals mixed up, and maybe you did it on purpose”. The accident broke the Russian five 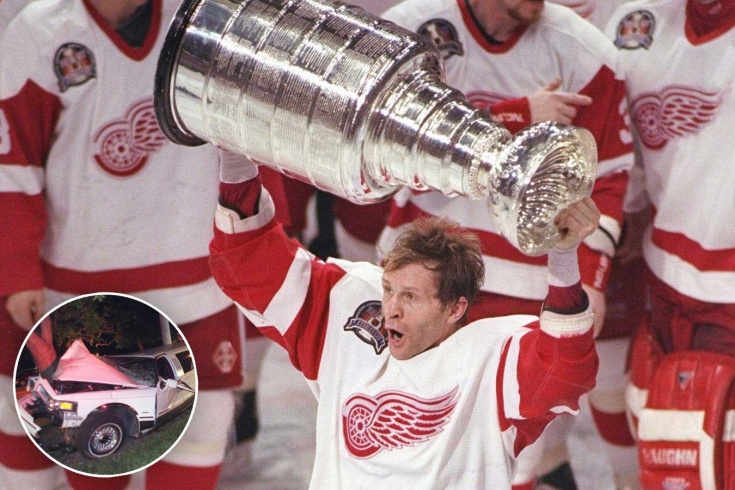 “Their names – Fetisov, Larionov, Kozlov, Konstantinov and Fedorov. Hockey fans in Detroit think this is the best thing ever exported to Russia, besides vodka,” wrote the Associated Press in the winter of 1997. The Russian five “Detroit Red wings”, which appeared on ice October 27, 1995 in a match against “calgary” has become a real phenomenon in the world of hockey. For Russian fans it was a surprising breath of that pure, real air hockey, which is all terribly missed.

The brief joy of victory

Wise Scotty Bowman surprisingly definitely felt that two different generations of Russians will be able remarkably to operate effectively together, knowing and complementing each other. The experience and composure of veterans Larionov and Fetisov were supplemented with speed and universalism Fedorov, Kozlov, assertiveness and power Konstantinov, and for the Russian audience from playing Russian five was suggestive of something “old-fashioned” and very familiar. Skaters, and kombinatsionnoe, seasoned with energy and rigidity, became the hallmark of Russian managers and “Detroit” as a whole, which in 1997 won the Stanley Cup, ending a 42-year drought. However, the joy of victory was short-lived.

On Friday 13 June 1997, in the suburbs, “Detroit” there was a terrible accident. The limousine is driven insane by the driver, at speeds of around 100 km/h crashed into a tree. The victims were Vladimir Konstantinov, Sergei Mnatsakanov and Slava Fetisov, six days ago to win the Stanley Cup.

“It happened 10 years ago, but the tears and the pain remained the same, as if it happened yesterday,” — said in the summer of 2007, the forward of “Detroit” Igor Larionov. Since then, it took more than 10 years, Larionov and Kozlov moved to coaching, Fetisov is a large state, Fedorov — in the club CSKA. And Vladimir Konstantinov, bringing terror to the opponent’s forwards, continuing treatment overseas.

Six days before the tragedy

Then, on June 13, 1997, the Red wings, he was appointed a gala party won the Stanley Cup – the first trophy of the club for the last 42 years. A celebration was planned at the Golf club in the suburbs of Detroit, and the chief organizer of the feast was the captain of “Red wings” Steve yzerman. Arriving at the gathering place for hockey players was leased to luxury limousines, in one of these machines and took the defenders Konstantinov and Fetisov and masseur Sergey Mnatsakanov. Later Fetisov said that he sat down on the seat in the back to the driver, against the direction of movement of the car, and that saved his life.

Halfway to the target, being in a suburb called Birmingham, Richard Gnida driver lost control and at full speed crashed into a tree. As it turned out, Hnidy driver’s license was revoked long ago due to his addiction to alcohol. By the way, in the Russian press reports at the time of the incident the name Gnida sometimes wrote as NIT, which was wrong only from the point of view of pronunciation, but not in fact.

“We were driving in the right lane when a four-row movement. Look, the car is accelerated, if the foot of the driver presses on the gas. Or is it the pedal is messed up, or fell asleep, or maybe you did it on purpose, I don’t know. We began to shout, all three of them: “What are you doing?” In Russian or English, I do not remember… And at this point, the limo crashes on the dividing line ahead of the cement lamp post, and we are right on it. But somehow or the driver had time to turn away, or it happened by itself — we zipped past the post, but in the next moment — in a tree! Boom! And immediately dark. I was lucky: I was sitting battened down, and the blow fell on the thigh and chest. And the guys flew heads forward into the partition, I first spun, and then I fell…,” wrote Vyacheslav Fetisov avtobiograficheskoi in his book “Overtime”. 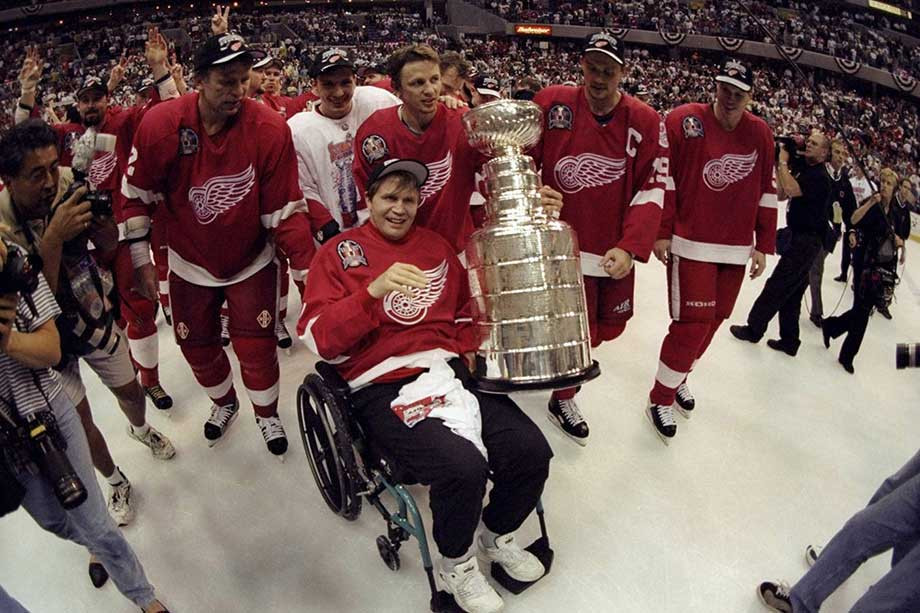 “It was scary. Vladi was 30 years old, he had just reached the peak of his career, was one of the best players in the NHL. And suddenly, in an instant, everything collapsed,” — says Larionov.

Fetisov, whose younger brother Anatoly was killed in a car accident in 1985, after the tragedy was close to retirement. “I couldn’t think about the game. I was lucky to be alive, and I didn’t want to leave the hospital. But the doctor asked me to leave, to know that at least one person all right,” — said Fetisov.

Konstantinov after the accident

“When Vlady was in the hospital, but regained consciousness, we brought him to the chamber, the Stanley Cup by the time all the new names have already been engraved. I asked him to find his name, and he just pointed me to it. We poured in a Cup some Apple juice, he sipped at sign has shown that he wants more. He drank it all without spilling a drop, the nurses cried when they saw it,” says then assistant coach for the Detroit red wings John Wharton.

A few years later after the accident, Vladimir Konstantinov could move only with a Walker and needed constant care. His wife Irina, although officially is married, but lives in another city together with her daughter Anastasia and no help Konstantinov has not.

Vladimir regularly undergoing rehabilitation in the center in Livonia. 3 or 5 days a week he is engaged under the supervision of coach Matt Drake and performs special exercises. Konstantinov’s condition has improved markedly. He began to walk and to perform daily household chores themselves.

In may 2013, Vladimir Konstantinov visited a hockey match “Detroit” — “Anaheim” and looked in the locker room of the red wings, with him on the game was also attended by Igor Larionov, Thomas Khol’mstrem, Kris Draper, kirk Maltby.

At the ceremony in honor of the completion of playing career Steve Yzerman, Konstantinov rapidly welcomed the audience at “Joe Louis Arena”. In response, Gladiator smiled and waved.

“Remember, no one but Vladimir not dressed in “Versace”. Now, every time I see him, I ask: “are you Versace? He replied: “Certainly!” jokes striker club Chris Draper. 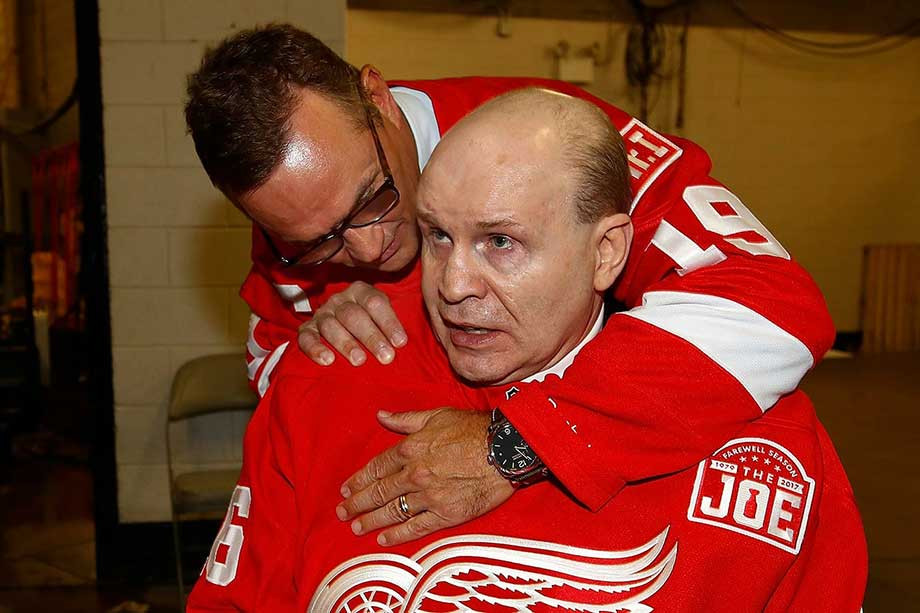 Unlike Konstantinov, Mnatsakanov caring for his wife Elena. He gets up from his wheelchair, but otherwise is quite a full life.

However, the memories of that tragic event forever erased from his memory. “He has a happy voice. I know that he’s recovering,” says the wife.

What happened to the driver named Gnida? According to the results of the test, his blood found only minor traces of marijuana. After trial, he was sentenced to nine months in prison. In December 1998, the 29-year-old Gnida again appeared before the court in connection with violation of probation. What became of him next is unknown.

Alas, this terrible accident and broke up the history of the Russian five, which became a bright page in the club’s history “Detroit”, and the NHL in General. And Scotty Bowman, the establishment of this link was the culmination of coaching talent, and brought the love and respect of millions of Russian fans.