The Russian Welterweight boxer Radzhab Butaev said about the upcoming match against compatriot Alexander by Rasputinym. 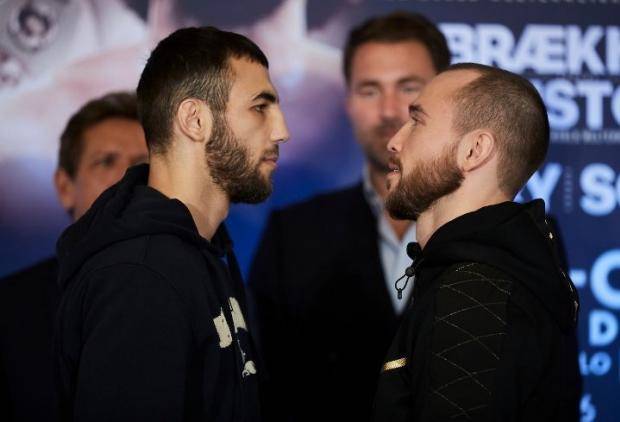 At stake will be the WBA Regular title, and the fight will take place in Monaco on 30 November.

“WE BELIEVE THAT WE CAN WIN”

– Title fight between two Russians rarity. You are more comfortable preparing for the battle against the foreigner or against compatriot?
– Confrontation of boxers from different countries interesting. But in this case, Alexander Besputin number one ranking. And both he and I want to become world champion.

In one well-known website there is a vote on the outcome of your battle. About two-thirds of visitors give preference to Rasputina. Why do you think?
– The fact that I myself has not shown. The people who watched my fights, did not see even 50 percent of what I know. I have not had one full camp to calmly prepare for battle. Always some setbacks or injury. Sometimes we had to agree to a fight three weeks before entering the ring. Don’t know me, so favorite think Rasputina. I don’t care who is considered the favorite by the fans or the bookmakers. I know that believes in me my family and my team. And most importantly I believe in myself. I can beat it.

– If you had problems with the training was as it is now?
– Everything is fine!

– You fought a maximum of eight rounds, and you have to go the distance in 12. Not in a hurry?
I have a very serious preparation. I sparred for 12 rounds. I don’t think I have any problems. I’m ready for the whole distance, but at the same time will aim to finish the fight early.

“AIMED AT CRAWFORD AND SPENCE” In your weight are such “monsters” as Terence Crawford and Errol Spence. Never had thoughts to change the category to one where the opponents are easier?
– No. I want to fight with strong fighters. Here take his belt and will be aimed at meeting only with them. The rest is not interesting.

– But there and in addition they have enough boxers: Manny Pacquiao, Danny Garcia, Shawn porter…
– I want to fight with the leaders to become a leader yourself. I am by nature a maximalist.

– I can assume that in this case, you are jealous of the Egis Kavaliauskas, who was to be a fight with Crawford.
– I want to wish him luck. But rate his chances as low.

– Your nickname is “Python”. These snakes go without food to one and a half years, and you now have to starve to meet in Welterweight?
– Not at all. Many say that I hardly fit into the limit, but really no problems with it I never experienced.

– Then why are the last fights you had in the first average weight?
– As I said, I have not had such training, so I know the name of your rival for a month and a half. Each training took two to three weeks. Why do I once again “die” chasing weight during this period. Illogical.

“THE FIGHT WILL BE INTERESTING” – What impression you got from the fighting Besputin?
I can’t say that I saw something special. Ordinary boxer. Like quick. Tries to imitate Lomachenko, but is not very good.

– I was under the impression that he is unstressed boxer.
– I think so too, but I don’t know how it really is. He does a lot of punches, but without much effect.

– And you met in the Russian team?
We even sparred once. Maybe it was 2014. Easy sparring. Absolutely not deposited in the memory. I thought I forgot until someone reminded me.

– Exactly a year ago, Besputin said in an interview that the fight with you will be interesting for the fans only, if you have both titles. Titles you have not appeared, and did the fight more interesting?
Yes. The fight will be very interesting. At least for the Russian audience. We are one of the best representatives of this division in our country. We are aggressive, at stake is the belt, so it should be interesting.

– You performed at large arenas in the United States. Now the status of your match above, but it takes place in a small casino in Monte Carlo. Not bother?
– Not at all. My goal and my dream to bring the world title belt in Russia, and no matter where I put it in. Whether it’s thousands of modest arena or hall. All pales before the opportunity to become world champion.

– What part of the fee plan to leave at the casino?
No. I’m not a fan of gambling. – You Dagestan, therefore the obvious question. Why you are in Boxing, not in MMA?
My brother wrestled and he took me to the section. For some three weeks. I did not like. Later we passed a Boxing gym, and I got to practice. From the first day I realized – this is mine. It was a crazy desire to train.

Now in Dagestan the boxers ‘ success is tantamount to success fighters? Or mixed martial arts has gone far ahead in popularity?
– I do not know what attitude to me, when I become world champion. But when performed Mavlet Batyrov and Murad Umakhanov, wrestling was in the first place. Then there was Khabib Nurmagomedov, Rustam Khabilov and their sport took off. What will happen when I win the belt? Can not know. But will do all that Boxing was the number one sport in his native country.

– As far as I remember, world Champions in Boxing from Dagestan was Sultan Ibragimov, and Khabib Allakhverdiev. They have somehow affected?
– Yes, of course. I watched their battles, when I played in the Junior team. Their success motivated me to start his professional career. I realized that anything is possible. You can go to the United States and succeed there.

– What are you focused as a kid, and some of the countrymen conditional or Mike Tyson?
– From the very childhood I was called Zab Judah. I liked the boxer, and compared with him I was flattered.

– It seems like he is a career not completed. And the desire to meet him was preparing Timothy Tszyu…
– I think that career to conclude he would have time, but to meet a veteran I would not, even if his name is Manny Pacquiao. Don’t know how to tell him: “let’s fight”. Not nice for the 40-year-old boxer, even if he is the world champion. Better than Spence or Crawford than 40-year-old Pacquiao.

source: “Soviet sport”Read on: Rajab Butaev: the Besputin imitates Lomachenko. Not too wellThis is interesting:the Brothers back in business: Alex and Anton Miranchuk against have risen from knees “Dynamo”!Reveal the secret explicit scenes with Asmus in the movie “Text”

Spartak fully immersed in the “swamp”

That Tatar girl did with a student from a broken iPhone

“a Year has stayed, but boast all the same”: the scandalous escapade Kokorin