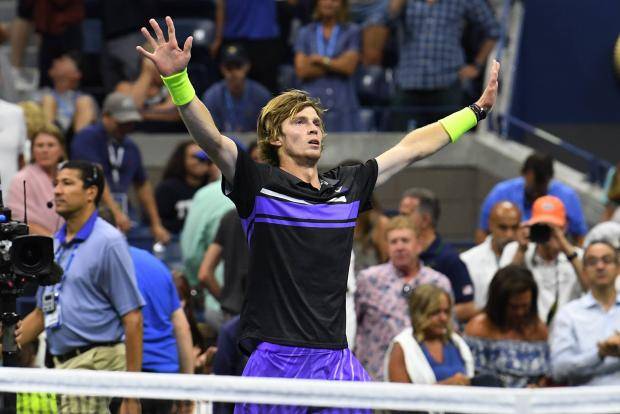 Knocking Stefanos of Ticipate in the first round, Andrei Rublev eased my way through the tournament. Moreover, in his quarter of the grid at the start stumbled Dominic Tim – the fourth racket of the world has not recovered from recent illness and then lost to the Italian Thomas Fabbiano. In the end, opponents with high ratings and the status of the favorites of the Russians not left up to the semi-finals! With one caveat – in the third round he was waiting for Nick Kirios.

The same Kirios, who at the age of 19, beat Rafael Nadal and reached the quarter-finals of Wimbledon. Who always, in spite of the extra weight (Yes, he was a very plump boy!) impressive natural talent. Which to his current 24 years has been predicted for a couple of “Grand slams” and the iron place in the top 5. But, alas, too often behaves as if the court kicked him out mom, and have to play “don’t want”.

Scandals, skirmishes with referees, arguing with fans during the match, throwing on the court, rackets, towel and even plastic chairs – it’s all about Kirasa. His shame, censure, fine – only recently, in Cincinnati, during the match with Karen by Hazanovym Nick said the arbiter of all 113 thousand dollars, which are now obliged to pay ATP (despite the fact that at the tournament, losing to the Russian in the second round, earned “only” 39 thousand). And commenting on in new York this penalty literally said: “ATP is a lot of corruption.” Then he began to threaten already disqualified! Here, however, Kirios was scared. And after you said that incorrectly formulated thought. “I was not referring to corruption, and double standards” went down Nick.

Not the fact that will help – though hearing about it is still going.

We have to admit that nick would be boring. And most importantly – despite his bad temper and unnecessary cravings put on a show on the court, he’s really cool to be able to play! And when he wants, shows outrageous level. So this season took the titles at Acapulco (where he again defeated Nadal) and Washington (where the two tie-breaks in the final, coped with who received the course of Medvedev). Another thing is that this happens rarely. Here – and only the 30th position in the ranking. But the main thing – nobody knows exactly how Nick will play their next match. Nick himself is no exception.

So Rublev could easily win. So devastating to give him in three sets.

Fortunately, it happened the first option. Not that easy, but quite confident, not losing any of the party, Andrew brought the match to win. Just 1 hour and 51 minutes. In principle quickly. Given the fact that the guys played two tie-breaks.

Kirios and, by the way, played very well! First-principle normally behaved. And secondly- really showed a tennis of high level. Focused filed (netted 30 aces!). Confidently went to the set. Steadily looked on the back of the line. But if Rublev in such form, as now, to deal with him is almost impossible!

Two years ago, he became the youngest quarterfinalist of the US Open after Andy Roddick in 2001 (Andrei’s moment of success was only 19). Now, it seems, is willing to at least repeat this result. Three wins over players in the top 10 over the last month and a half (including a triumph in the meeting with Federer in Cincinnati!) – proof. Rublev did not specifically boost the performance last week, eliminated in the quarterfinals in Winston-Salem (lost to Denis Shapovalov) to save more energy in new York. And now fully enjoys it!

In the end, the Russians took both tie-breaks (although in the beginning of the second lost 0:4). And then Doge the Aussie and the third party. Already more confident, with a margin of 6:3.

Just everything went in my favor, – said Andrey. In the beginning I thought, “Just to get to the tie-break!” – so cool Nick filed. Understand that if you get it to hook, you will have a chance to win. When won the first set, was this thought: “Huh, not bad”. But behind on the second tie-break 0:4, I just realized that this is not such a big gap. You just have to win one point at the reception, most famously twice to apply and the difference will instantly become minimal. And then who knows how things will go… In the end went great!

– Andrew played great. Was incredibly aggressive – gave Rublev tribute to Nick himself. – I was never able to find his game. I have a lot of hurt, I couldn’t see on the court – arena Arthur Ashe is very big, and needed time to adapt. Plus I couldn’t show my best tennis. But this does not negate the merits of Andrew. He is clearly in good shape. We are pretty sure there will be.

And we hope, Nick!

Now in the fourth round Rublev will meet with Matteo Berrettini from Italy.