The Vice-captain of “Chelsea” Jorginho was accused of intimate relations with an employee of the London club a few days later after the star of the show “the Voice” has announced that it expects the Brazilian child. 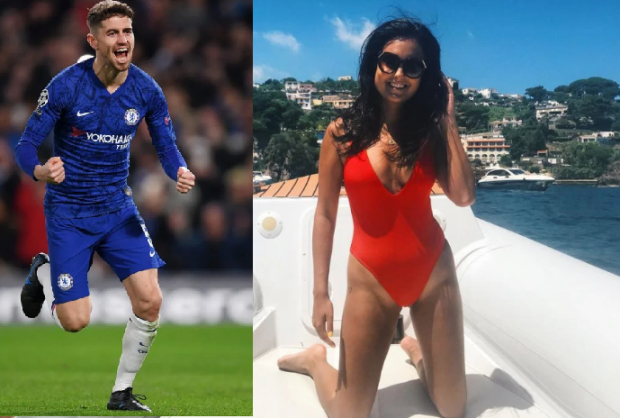 Too hard? Then explain the points.

28-year-old Jorginho (the same one the favorite Maurizio Sarri, taking the midfielder with him from Napoli to Chelsea in 2018) is soon to be a father. For the third time. After all, naturalized Brazilian (2016 Jorginho plays for the national team of Italy) there are two children from the legitimate wife Natalia, they married in a Church three years ago and broke up last summer.

Now, the mother of his third child four months should be Catherine Harding – the star of the British version of the show “the Voice.” About pregnancy singer announced during the quarantine in his instagram. And it is also not the first maternity. Harding is raising a daughter from a famous actor Jude law. And it is necessary such to happen – no sooner had the beauty of Katherine to please himself and the fans a nice piece of news as the journalists of the newspaper The Sun published a recognition of a certain Aaron Hughes, who accused Jorginho that loving football in the fall of last year destroyed his four-year affair with Eliza Skelton – a former dancer who works in the office “Chelsea”.

“WHAT KIND OF SEX DO YOU PREFER?”

This is Skelton met with Jorginho, as soon as he moved to the London club. Somehow the girl knew Italian, was asked to help with the translation. Since then, as appears from private correspondence, accidentally fell into the hands of Hughes, footballer and his secret passion met regularly. Including during the pre-season Asian tour and Chelsea’s. Despite the fact that Jorginho already was in a relationship with Harding, and Skelton… was engaged with Hughes. Screens correspondence that deluded Arsenal fan (it just so happened that Hughes supports biggest rivals Chelsea in the EPL) provided by The Sun, prove that it was not a Platonic relationship. “What sex are you now prefer to be wild or romantic?” “I wish you were drunk. – I will”. “Do you like red or yellow roses? Red, what? On my shoulder there’s a tattoo of a red rose”. Such recognition found Hughes in the messenger of Eliza when she was in the bath… It happened on the eve of the holiday, which the pair planned to spend in Sri Lanka. Exposed the girl denied his guilt. But Hughes never forgave her and the couple broke up. After four years of serious, as it seemed to Aaron, relations.

Well, should we now be surprised that Chelsea Jorginho, which in 2018 was bought for 57 million euros, not even close to performing in “Napoli”? In London, the guy definitely was not up to football once he made this “Santa Barbara”. Let’s see how it will react to the club’s owner Roman Abramovich. Against the background of financial losses incurred by his football business because of the pandemic, this sex scandal totally out of place. If anything, Jorginho’s contract with Chelsea is designed to 2023. There is a reason to think about selling. Buyers just are.