HomeFights“Shall we continue?” Dan hooker was beaten by Dustin Pore, but asked me to give him another round. Video

“Shall we continue?” Dan hooker was beaten by Dustin Pore, but asked me to give him another round. Video 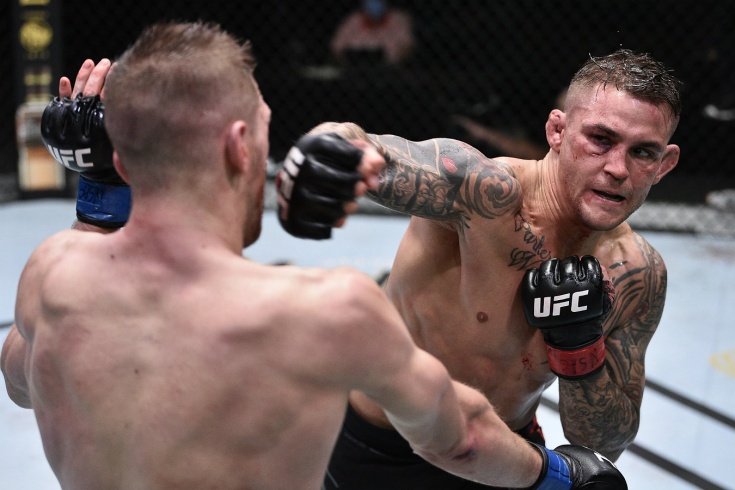 Early on the morning of June 28, Moscow time in Las Vegas ended on a mixed martial arts tournament UFC Vegas 4. Yes, the participants were not the most attractive, but that doesn’t affect the quality of the fights. Well, the main event of the show between Pore Dustin and Dan hooker now be called claiming to be the best fight of the year.

Before the fighters had a difficult task to outshine a number of the most outstanding matches of the preliminary and main card. Looking ahead to say that Diamond and the Executioner nailed it on hurrah.
The first round began with the traditional reconnaissance, hooker was checked by the vigilance of Pore of the race, firing his low kicks. Soon, the new Zealander moved to become more active and become exposed to direct blows to the head. It made to join Dustin and since then, the degree of opposition has increased dramatically.

They began to clinch more and to work in close range and by the end of the first five took place on the first hard exchange. Dustin checked the strength of hooker chic elbow, while the opponents struggled with a right hook and a serial body, after that hooker used the favorite knee kick, but the American is in debt left by answering a series in the head. In General, the first five minutes was left for Dan.

In the second round both fighters showed great durability. First, hooker has withstood accented hit in the jaw, and then struck one of the signature punches in right side jaw and arched his exact hit with the knee. But Pore it all swallowed, and then began to tie up his opponent to recover in the clinch. Breaking distance, the soldiers made a real meat grinder, throwing a huge number of strikes. The hooker is bleeding from the nose and chaff around the eyes, and Porte then began to breathe a little and slowed down.

Apparently, Diamond gave too much effort in the middle of the second segment and almost paid for it. In the last 20 seconds of the round, the new Zealander brought down on him a hail of blows and only God knows how Dustin managed to survive after nearly a dozen precise, brutal and accented hits to the head. Frankly, if the hooker had another 10-15 seconds, then continue the fight we have not seen.

At the start of the third round, the fighters slowed down, obviously trying to recover after the second five-minute. In the middle of the cut Pore and a hooker tried to switch to fight, but here the obvious advantages there was none, but later statistics showed that in this round, crossed the fracture and the initiative passed to Dustin.

In the fourth round, bloodied and exhausted gladiators obviously slowed down. Hooker, as if having lost faith in the ability to knock out Pore, again tried to focus on the fight, but soon found himself in a dangerous position and almost got on painful reception, simultaneously having sustained a nasty shock Diamond. Overall, the initiative finally passed to the former interim champion. Most likely, began to affect and experience of an American, after all, not only is he a former winner of the title, but the party has eight main events of the show, while hooker for the first time in his career fighting with such an experienced and tough opponent.

In the final round of Hangman is quite heavy on his feet and had lost speed. But still systematically attempted to takedown and put the opponent in front of a difficult task. Dustin didn’t force things, defended very well and relied on accurate attack from the rack. At some point I thought that spend Pore in this style the whole fight, without the usual open exchanges, he would have won with a much smaller losses, but the battle would have clearly lost in entertainment.

In the last seconds of the match Dustin and he tried to get in pain and from that position managed to convey to the bloodied face of a hooker a few unpleasant and net short poking. The final siren seemed that Pore could spend two or three such rounds. But the hooker were clearly holding not so much on functional training, how much morally-strong-willed.

The judges had a difficult calculation, but in the end, they rightly gave the victory to Pore – 48:47, 48:47 and 47:46.
To summarize, the spectators saw a potential fight of the year, which, incidentally, was noted and the UFC, as the fight was recognized as the best in the tournament. As for fighters, Pore clearly back in the race for the title, but hooker proved that not in vain got a chance to try the forces in the confrontation with the rival elite level, and frankly, after this show we would like to see Dan frequently.

After the fight, Dustin came in the opponent and wondered if he was going to fight Geti. In the report it was heard from the smiling Dan: “Well, let’s continue?”. Maximum respect for these two gladiators to each other is another positive touch to this confrontation.