Overview of the day’s play in the NHL. 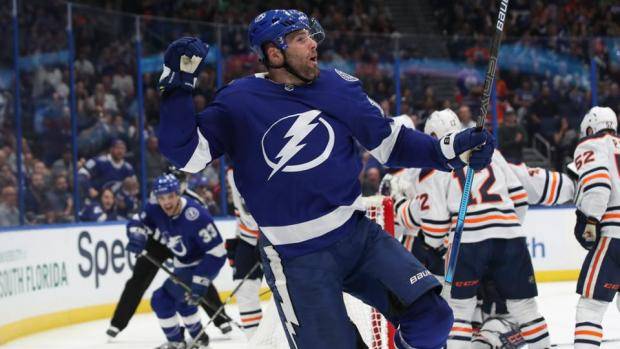 The next day, the NHL has offered to the audience 11 matches. Then you and scored a fantastic course “Tampa Bay” without, alas, injured Nikita Kucherov and Alexander Ovechkin, with his “Washington” suddenly slavivshii move, and clinging to the playoffs, “Rangers” by Artemy Panarin. Freedom for the eyes of the fans, especially Russian!

Edmonton came to visit enchanting in the recent “Tampa”. No joke, the hosts won eight games in a row, and their leader, Nikita Kucherov in each game scores points by shooting doubles periodically. But the injury forced him to miss a match. Like anything serious, but it is a great loss. Guests also desperately fighting for the playoffs. But enough of their desire to cope with glittering “lightning” when you consider that the leader of the “petroleum” Connor McDavid is also injured for a couple weeks?

The desire may have been a lot, but Tampa Bay so from the beginning, sat on the visitors ‘ goal, that will not find! “Edmonton” in the first minutes was saved by the goalkeeper and the post. In attack, the guests did not come out. “Lightning” flashed just dazzling, not scored in a completely empty gate even. But in the first period, all for nothing, Kucherov was not enough! The second third started in the same manner, “Tampa” attacked, the goalkeeper saved, but was strained one another. Five minutes and here you go! It is logical that the hosts scored. But the joy was short-lived, the guests quickly equalized. Oh, those unyielding Canadians! However, not on the attack, Tampa Bay quickly regained the lead, but still in the minority! Here and there was a lull. It lasted to the end, Tampa Bay scored. There’s a ninth win in a row, phenomenal!

The “Colorado” took “the Rangers”. There is not much to tell — met some of the leaders of the NHL after all. However, the “Washington” in recent games suddenly went lame. Two humiliating home defeats in a row, and from the old gloss left over. The leader of the “capital” Ovechkin is now experiencing colossal pressure. The iconic mark 700 goals left to score only two, but still does not work. So the team is settled. What will happen this time on the road against no less formidable opponent?

Formidable opponent for the health of started. In the middle of the first period, the hosts came forward Vladislav Kamenev gave a perfect pass! Yes, it is not the time for “Washington” and Ovi to rehabilitate. As if the humiliation is not continued. City have continued to fall without a parachute, is already 2:0 soon. The owners simply tore the visitors ‘ defence. “Capitals” is not broke, was able to reduce the deficit. Then began a game of cat-and-mouse, the team was not disclosed, and waited. Washington broke even! Is the revival, although Ovi and silent? Even without the silent leader “capital” snatched in the end the most important comeback victory! Now we have to wait and Ovechkin from new exploits.

“Rangers” visited “Minnesota”. The teams are about the same conditions. Try to time to jump into the last car of the train the playoffs, but the gap is still quite large. Yes, there is also the star of the new Yorkers in the city suddenly got bored. Four of the match without points, only in the previous meeting, the transfer was made. Game the best of the Russians scorer (though Kucherov is catching up rapidly) a lot depends on the Rangers. Victory is necessary as air!

The hosts started quickly and scored quickly. But then, the “Rangers” and there Panarin, he immediately tied the score! Minnesota decided to put a cheeky guests at the place, and now 2:1. Ending the second third, and please 3:1. Pavel buchnevich decided to keep the intrigue, reducing the gap to the minimum. There was another chance for the Rangers. And they took it, after the transfer Panarin, the Rangers scored a goal and the game went into overtime! Meeting dowla to the penalty shootout, Panarin and then scored. Defeated the new Yorkers in the most important match! The Rangers reeling once again, but the chances of the playoffs remain. Panarin, Buchnevich and our goalkeepers who would have helped the team…