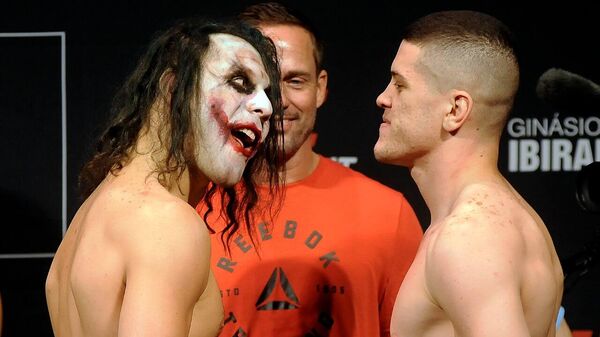 In the Brazilian state of são Paulo took place tournament on the mixed single combats under the aegis of the ultimate fighting championship (UFC). Pretty mediocre card expected not impressed with fans of MMA, but a few notable moments in the show still happened.

The main card of the tournament was opened by the Middleweight Markus Perez and Wellington Turman. This battle between the two Brazilians risked to remain in the shadows deaf UFC history, but at the ceremony of weighing the fight was in some way special.

Perez showed a sample of bright behavior at such events, having in the makeup of the villain the Joker, known in the comics and the movies. Rival, compatriot soldier was greeted by the catchphrase of his character from the legendary fictional city of Gotham city: “why so serious?”

However, during the match, Thurman has been Batman. 23-year-old athlete was superior to Perez throughout the three rounds and the judges unanimously gave him the victory (30-27, 30-27, 30-27). Thurman shut down the defeat in his debut fight in the UFC, and the statistics Perez promotion was negative (2-3).

Perhaps the most striking episode of the tournament with the sports side was to fight Charles Oliveira (Brazil) and Jared Gordon (USA). Lightweight very briskly started the match, and also it completed in one and a half minutes. Oliveira caught the opponent to counter punch and sent that to a knockout.

The UFC's career leader in subs eschews grappling once again for back-to-back KOs, as Charles "do Bronx" Oliveira (28-8, 1 NC) dummies Jared Gordon to celebrate his 25th promotional bout! The 13th-ranked LW has stopped six straight and 26 total. He's overdue for a step up. #UFCSP pic.twitter.com/7NfRRKSb5z

30-year-old Brazilian extended his series of early wins to six fights. Now is the best active result throughout the promotion. In addition, Oliveira came into clear second place on the total number of early wins in the UFC (15), second only to Donald Serrone (16). The Brazilian has the best score in League history in number of wins with painful or suffocating receptions (13).

But even that is not the whole track list Oliveira. Following the tournament in Sao Paulo he expectedly won the bonus in 50 thousand dollars for “Performance of evening”. This award Oliveira for the ninth time, this is another record of an athlete in the UFC.

Now in 13th place in the Brazilian ranking easiest weight category definitely looks temporary position. After the victory in the homeland Oliveira took the fight to athletes from the top 6 of the division’s Conor McGregor and Paul Felder. Obviously, it was their Brazilian sees the two opponents who will allow him to enter the battle with the champion of the lightweight division Habib Nurmagomedov.

The cure for insomnia

In the main battle of the Brazilian tournament, agreed with local athlete Ronaldo “Jacare” Souza and the pole, Jan Blachowicz. The fight took place in the framework of the light heavyweight division, in which the South American made his debut, rising of average weight.

It turned out the main event of the evening is extremely faded. The fight lasted all five rounds, but for 25 minutes the audience never got sight. In social networks this game actively criticized and ridiculed, calling, for example, the perfect cure for insomnia. Probably to sleep clones and at least one referee of the fight. It is difficult to find another reason why the victory was given to Blagovica not unanimous (48-47, 47-48, 48-47).

The specific point for understanding the entertainment of the tournament was the lack of bonus for “fight of the night”. But it has increased the number of awards for “Performance of evening”: in addition to Oliveira, they had James Kraus, Ricardo Ramos and Randy brown.

After a stop in Sao Paulo, the UFC goes on a three-week break to get ready for the big December. Last month, the promotion will open on December 8 tournament in Washington, where the main battle will join heavyweights Alistair Overeem and Jorginho of Rozenstruik.