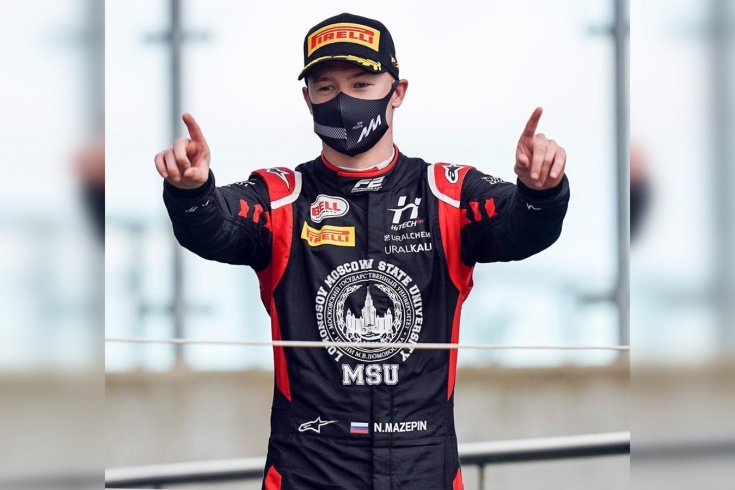 Monasery of Formula-2 let and don’t turn into domestic violence, but fact is fact: of the four major races of the season in three of the victories won by representatives of Russia. Nikita Mazepin even at the last stage in Hungary recalled that in the championship not only has Robert Schwartzman, and on Saturday announced himself as a contender for the highest position in the overall standings.

Saturday’s race was dictated by Nikita. Lucky Russian just before the start when stalled occupying the second position of Callum Ilott — judging by the performance of the British during the race, victory could be given to it. Well, if the driver Academy Ferrari fell back, the initiative passed to Mazepin.

Even in qualifying, the Russians took the high fifth place, and shortly after the start, Nikita has become the second — and quickly caught up with Mick Schumacher. Racer Tech was noticeably faster than the son of seven-time world champion and promptly came forward. The drivers were on identical tactics: start on the softer tyres “medium” with a subsequent transition to “hard.”

After clearly held the pit stop Mazepin stayed ahead of Schumacher, and then Nikita had three objectives: to outrun slow enemies, to protect the tyres and to wait until the boxes go started on “hard”. When all the riders changed tyres, Mazepin back into the top spot with a solid five seconds.

Then it only remained to see how faster will be the pilots who spent a pit-stops later and switched to the softer medium. However, absolutely enormous difference in pace was not, moreover, many drivers and teams — in contrast to Mazepin and “high-Tech” is obviously not coped with the task to get to the settings and the cars much spent rubber. The same Schumacher eventually dropped to a modest ninth place. But his left the first, not having admitted to myself Zhou Guangya on the latest “medium”.

25 points for the victory allowed the Russians time to climb in the overall standings to fourth place — just three points from trailing the top 3 Christian Lungara. To preserve the leadership of Robert Schwartzman is now 29 points — on the course of the season, which is confirmed by at least another six stages (and you need to wait at least eight), a mere trifle. So what else can suddenly intervene in the fight for the title.

Fresh successes of the Russians a pleasant surprise amid a weak debut in Formula 2 season in 2019 and at least a weak start this season. In 2019 failures Mazepin was especially painful in light of the fact that his teammate “ART” Nick de Vries became the champion. Winter Nikita changed the team at home on “high-Tech” is a team funded by his father Dmitry.

For “high-Tech” season 2020 — the debut of the f-2, but it is known that the team was able to attract a number of experienced engineers, besides team serious experience of performances in different series, and teammate Mazepin is an experienced Bow of Giotto. In General, “High” at the winter tests have shown the speed, which is now confirmed.

But after this success we can not say that Mazepin great chance to get into f-1. Yes, there is money, there are results, but vacancies in the Formula-1 to 2021-th less, and some teams rely only on their students, while others need experienced riders, not young people with sponsors. Theoretically Mazepin has a chance to get, for example, “Haas”, if the Americans will be a serious budget deficit, but it is possible that real jobs will only appear later in the season.

And what about Stefan?

If you have arrived somewhere, somewhere, and departed. Robert Schwartzman and his team, “Prema” stage at Silverstone as it turns out a failure. The Russians never liked this track, and now with the team absolutely not got into the settings. If qualification was still possible to write off the 18-th place in traffic, in the race it became obvious that the car is not traveling.

During the previous stages, Schwartzman won the admiration of all the ability to protect the tyres, but this time the wheels on his car wore out noticeably faster than the competition — what can I say, if during the race to Robert sometimes drove even Sean Gelael. At the same time similar problems with the tires was tested, and the partner of Russian Mick Schumacher — so the engineers “Prema” will have to break down before the Sunday race. But ahead of the second phase on the “Silverstone”…

For the championship Schwartzman there is nothing horrible has happened: Aylott clearly did not get the points because of problems before the warm lap, Schumacher has scored only two points. Much closer, only Lodger, but it’s right before the finish missed the Tsunoda in the fight for the podium.

Schwarzman may still miss the lead after Sunday’s race he will start only 14th, and with unclear prospects, but Alot from the fourth place can dream about victory. But in this situation more important than the momentary position of the Russians, and the decision of problems with adjustments to the second stage in the UK.

If the artist still retains leadership, and his Shine, here and now, the third Russian in the championship remains only to sympathize. There is a feeling that Artem Markelov made a mistake when he decided to fully return to f-2 with HWA Racelab. Like experienced team looks this season, helplessly: in qualifying its pilot only once was above the 17-th place in the race pace either.

Well, at least Markelov interrupted series of gatherings and he will be able to work with the car in race mode — maybe a breakthrough will happen in the next weekend? In the end, Mazepin after the Austrian stages (one point for four races) we didn’t either.