HomeFightsUFC fighter tried to give up 9 times, the coach didn’t listen to him. Roskopf showed cowardice?

UFC fighter tried to give up 9 times, the coach didn’t listen to him. Roskopf showed cowardice? 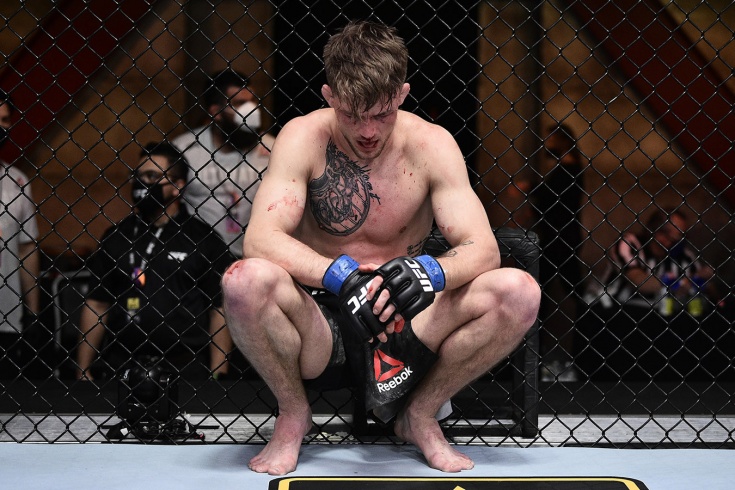 Early on the morning of June 21, Moscow time in Las Vegas ended the tournament UFC. The battle of Alexander Volkov with Curtis Blades and a powerful battle Josh speaking with Shane Burgos overshadowed one very interesting and controversial event of the preliminary card. League debut Max Roskopf desperately asked his corner to remove it from the fight after the second round, the coach flatly refused this idea, until it is not the referee stepped in and the doctor assigned to the tournament. Understand what happened in that match, and as it hit the budding career of 25-year-old boy.

As Roskopf got a chance in the UFC

Card recent tournaments of the UFC, for obvious reasons are made in a short time. While the world is not restored full air traffic, many fighters from the roster to not count. Not an exception and the past show. It was open fight lightweights Austin Hubbard and Joe Soletskiy. But on June 13 it became known that the team Soletskiy is infected with coronavirus, but because the fighter had to withdraw from participating in the tournament.

The matchmaker found a way out and agreed to give a chance to a newcomer to the League max Roskopf. Yes, against Hubbard, who has already had three fights in the UFC (and MMA in 15 overall) 25-year-old boy seemed very green. But on the other hand, his professional record was encouraging, five victories in five matches. In this case Max he has won early with strangulation. Agree that it was a good background.

A disastrous debut and pleas for surrender

So, for Roskopf the day of reckoning came. His battle with Hubbard opened the preliminary card of the tournament. It is obvious that he could not approach it in the best condition. Forced misogony in any case had an impact on endurance max. But while he was fresh, everything was good. In the first round he put in front of more experienced opponent somewhat difficult task and even translated it on the ground, which looked decent enough.

But in the second five-minute functional training max began to sink, which had a direct impact on what is happening in the octagon. Austin repeatedly through protection of the opponent and forced him to swallow a precise hit to the right. At the end of the second segment the position of Roskopf was quite unenviable. This is reflected by the statistics which showed a fourfold advantage Hubbard by quantity of exact blows. Nevertheless, it is impossible to say that Max suffered injuries that prevented him to continue.

Despite this, appearing in his corner, he almost immediately began to ask the coach to remove him from the fight. Roskopf reiterated this request on 9 (!) times, but the attempt to surrender was rejected by his coach, former MMA fighter Robert Drysdale.

“You can beat this guy”, “Keep up the good work on the ground”, “are you Sure you want to lose?”, “You are champion”, “Come on, you’re a champion.” All these phrases Drysdale Rosskopf replied: “I don’t want to do it,” “Shoot me”, “this is not me”.

So there has passed all minute pause. When the referee went to the corner of max, informing him of the beginning of the third round, Roskopf had to take the initiative and surrender, personally, that fighting the environment is considered absolutely shameful.

The reaction of the fans

An unusual outcome of the battle was to be discussed directly during the tournament. But the opinion of fans was divided. Someone directly accused of Roskopf of cowardice. But, surprisingly, there were not the vast majority.

A lot of fans of single combats blame the management of the UFC that fights at short notice and not giving athletes the opportunity to prepare (a controversial argument, as max was not forced to sign the contract by force). Some pages in social networks have expressed sympathy for the newcomer to the strongest League in the world and expressed the hope that they would give him another chance. Someone has said that critics should try himself in MMA. A considerable percentage of comments were addressed to the coach Roskopf, which was accused of reluctance to listen to the fighter.

Overall, everything seemed quite well and certainly not as tough as in respect of the same Alexander Volkov, who, though lost the fight, but showed high moral and volitional qualities. Honestly, in terms of supporting the fighters, the fans, the MMA community should learn.

As for the American press, respected ESPN columnist Ariel Helvani openly protested the actions of the angular Roskopf and did not blame max. Overall, his view is shared by most experts.

The reaction of Austin Hubbard and Dana white

The executioner of Roskopf at a press conference after the battle was in a great mood and smiled a lot. He did not criticize the opponent for the decision to surrender and even let him a few compliments.

“I was surprised that he surrendered. Never seen this before. But I knew I had hit him cleanly and very hard, because I can’t blame him. He’s a tough guy who could withstand a lot of attacks. But he was shocked, he was rocked. In principle, during the battle I thought I would win an early victory. But I would never do like it,” said Hubbard.

As for manual promotion, the UFC President Dana white defended Roskopf from unnecessary attacks, but read between the lines that Max hardly ever perform in the best League in the world.

“Manager Roskopf literally terrorized Sean Shelby. Told him that Roskopf is a real fighter, what is the future of the sport. In the end, Sean fell for it and agreed to let max fight on short notice and did you see his statement

UFC is another level. Once believed, I’m a fighter too. One day I realized that it is not. When this realization comes, you just have to leave. Not saying that Rostoprom the same case, but if the guy felt that he should give up, let them go to hell with all who criticize him. He had the balls to take the fight on short notice and out of the octagon.

Don’t know whether he will recover from this psychological blow. I think tomorrow he will Wake up, look in the mirror and understand what he wants from life. There is no shame in coming in the UFC to understand that this is not for you. All who criticize him, let them try to do what he did,” said white at a press conference.

We refrain from assessing Roskopf and his coach. Maybe Max just got excited and swam. In the past he’s never lost and spent on winning not more than 1.5 rounds. Obviously, he never received so much damage in ten minutes and I assume it could be for him a true revelation, which has led to disastrous outcome. There is a clear lack of experience, the ability to turn the tide of the emerging unsuccessful fights comes after such meetings until Roskopf proved it is just not ready. View, will he make conclusions from what happened and, if so, will you give him a chance to prove it in the UFC.

Sergei Kharitonov: “Always happy to come for fight with Emelyanenko. I have a history with this passenger”

“I’ll make you respect yourself”. Alexander Emelianenko took up the challenge Kharitonov