HomeFightsUFC fighter won without a coach and a friend second. But is that what it was? Video

UFC fighter won without a coach and a friend second. But is that what it was? Video 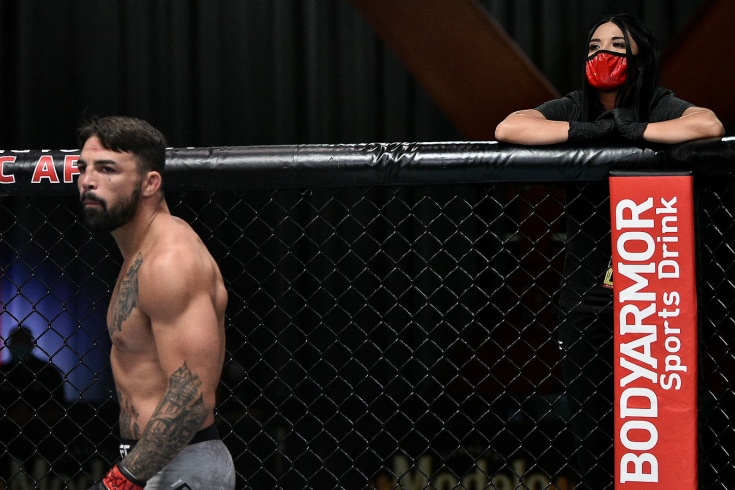 28-year-old Welterweight Mike Perry has a scandalous reputation. Throughout his career, American regularly quarreled with coaches, strictly rude opponents and did questionable things. Most recently, the fighter nicknamed the Platinum knocked out a drunk guy who has managed to insult a professional athlete. Perry claimed that he hit first, but this behavior is condemned even Mike’s colleagues in the UFC. However, if Platinum got off lightly and were not behind bars.

Perhaps the bitterness Perry was caused by sports mishaps. Before UFC Vegas 4 fighter lost three matches out of four and was under threat of departure from the promotion. Black band made in Platinum to go on an extravagant act: just before the fight with Mickey a Gaul , he refused the services of coaches. Perry argued that the decision as: “Before I was a trainer at the gym the UFC and taught classes in cardio kickboxing. When I got to work, starting to exercise and listen to someone else, I stopped listening to myself. This led me to failure. All I need from the corner is a bottle of water. Wipe my head, I put ice on the neck between rounds”.

The only person Perry was entrusted to accompany herself for battle, was Latory Gonzalez – girlfriend of the athlete. Recently they have had a difficult period in relations, but after the reconciliation Platinum gave the beauty role to his second: “She will be there to make me feel comfortable. If the fight ever go to the second round, I want her to have time to talk to me in the corner. I want she kissed me and asked me to finish the job”.

Surprisingly, Perry had been a magnificent fight: Mickey Gallos had very hard. Platinum conducted a series of powerful blows, at the right time leaving in the dead of defense. In the old days, Perry was fond of the cabin and could easily fly to the knockout, now he blocked almost any danger. Even work in the stalls where once Mike’s been seen very rarely, managed to raise to a new level. As a fighter and had planned, in between he has applied ice and Milo approved of the girl: “Sweetheart, you’re doing great. You’re done, go ahead”.

Perry failed to win early, but the judges had no choice but to unanimously give him the victory. After the announcement of the verdict the winner warmly embraced friend second. Perhaps Perry should really continue to be trainers who only annoy him. Platinum did a great job on tactics, brought up their weaknesses and won. Perhaps the rejection of the coaches will become a new trend in mixed martial arts?

Perry found his ideal scheme, but the money he wants to earn more, “Yes, I changed approach before the fight. I built my training camp bit by bit and managed to prepare well. Worked long and hard. Thanks to the victory I will give the debt that has accumulated a lot. I pay very high taxes. I’m not complaining about their fees, but the government takes me very much. It’s sad. This must have something to do.”