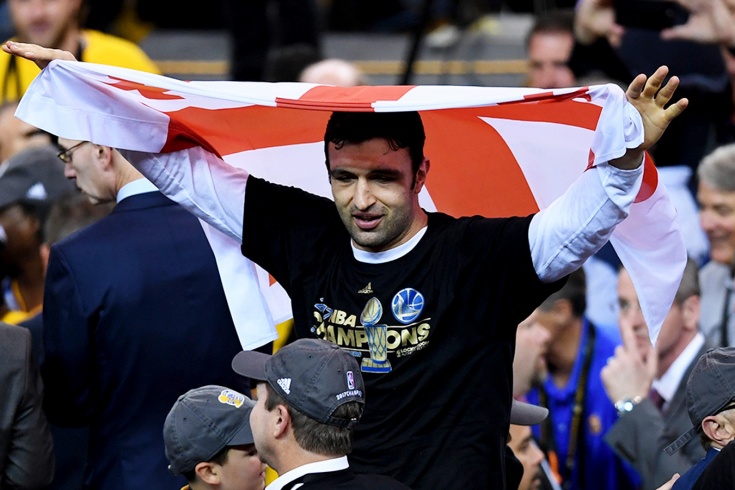 Georgian center Zaza pachulia 16 years played in the NBA. Over the years, Zaza has assigned a reputation as “the bonecrusher” and “bastard”, which plays very rough and causes injury to rivals. If you enter the name of Pachulia in a search engine YouTube is at the forefront of pop up videos with titles like “Zaza pachulia dirtiest NBA player”. In the playoffs, the NBA-2017 Zaza injured an ankle then the star of “San Antonio spurs” Kawaii Leonard, for which he was sharply criticized. This moment is most often associated with the name Zaza.

“I don’t think Zaza was trying to injure anyone. He’s just clumsy, like many “large”. He wasn’t trying to injure Russell Westbrook, but it’s really in the eyes of many looked uncomfortable. It’s basketball, it happens. Zaza loves the game, he never tries to hurt. There is even nothing to talk about,” said teammate of Pachulia in the “Golden state” of Kevin Durant, when Zaza once again “distinguished” with impartial hand.

All the “dirty” moments of Pachulia can really be attributed to the sheer clumsiness. Once a month he brought down the Durant, casually leaning on the foot of teammate.

Pachulia last summer he finished his playing career in the League. He now works as a consultant in the “Golden state Warriors”, a special team in my life by Zaza. In the “Warriors” Georgians became a two-time NBA champion (2017, 2018). The contribution of Pachulia in the titles is not too high — he at best was 10th in importance in the rotation. However, Zaza enjoyed great respect in the team with lots of superstars. Klay Thompson, Stephen Curry, Kevin Durant and Draymond green has repeatedly defended the center from the attacks of the critics. Especially strongly bonded pachulia c Thompson. Zaza and clay constantly go out to walk together.

Thompson made a friend a gorgeous gift at the end of the career, the car “Rolls Royce”.

The head coach of the Warriors Steve Kerr is very eloquently spoke about Zaza.

“Zaza is the embodiment of moral principles that command. He is an outstanding professional. No matter what role you give him, pachulia will support their teammates. We were lucky that Zaza is in our team. I was lucky to coach such a player. Pachulia is one of the best people I know. He’s a gentleman, but at the same time fighting desperately at the site. It is simply impossible to argue that he deliberately injured Leonard. Trauma is an everyday part of life basketball player in the NBA. Especially in the playoffs where the fight takes place with great intensity. I don’t understand all this criticism of Zaza. By the way, he honorably sustained. Believe me, I knew really the bad guys who deliberately played dirty. Pachulia is not one of them. Zaza — very important for our organization. He’s a fighter, but in any case not a dirty player,” said Kerr.

Pachulia is a public active. He cares about what is happening in the world. At the moment the planet is struggling with the pandemic coronavirus. USA suffer the most. Pachulia decided to thank the American doctors for their hard work and literally hellish conditions. The center has hosted a charity lunch for those with “nobody has the time to eat.” Zaza invited to a Mexican restaurant at their own expense, more than 70 doctors working in San Francisco.

He pachulia at the meeting did not appear, but he explained his action. Zaza stated that it helped not only to physicians, and local businesses. Because many of the restaurants in the United States are suffering losses due to the pandemic coronavirus. “Local business is now in a very difficult position. Some of the restaurants were closed. They face significant challenges. I hope my big order, they’ll help a little,” said pachulia.

Zaza believes that in these difficult times we need to help each other as much as possible. He drew all attention to what the doctors and the entire medical staff in such a difficult period.

“This simple lunch is probably not a big deal. The most important thing for me is to send a message that we appreciate the sacrifice of doctors. They are the real heroes. They save lives. Work hard, sacrificing time that could be spend with family, their health, their lives,” said pachulia.

The theme of the business is not a stranger to Zaza. Now he is learning the basics of commercial activity in one of the most prestigious universities — Harvard.

“I am happy that I returned to the Harvard graduate school of business and will study in the class of Anita Elberse,” said pachulia on the page in Instagram.

Zaza is a respected personality not only in the “Golden state” and the United States, but a scrap in Georgia. He was awarded the Order of Honour for services to the state.

Pachulia more than fifteen years lived in the United States. The homeland is not forgotten. In Tbilisi, he opened a modern basketball court named after himself. In the adjacent territory also constructed a square, placed an inventory of the Park and mounted rides for the kids.

“Platform opened in the area where I was born and raised. I love and appreciate this place. My childhood started here. My basketball career started here, in this area,” said pachulia.

In 2018 pachulia have also bought a basketball team “Dinamo” Tbilisi and the base of the club. Zaza wants to maintain the once glorious organization (“Dinamo” Tbilisi is a 4 — time champion of the USSR, 3-time winner of the USSR Cup and multiple medalist of the Soviet Championships) in difficult times.

“Possession of the basketball club and training base will provide the opportunity to grow is still a lot of young guys capable to become successful professional basketball players,” commented his decision pachulia.

The center is greatly concerned for the future of Georgian basketball. Zaza is doing everything possible to promote this sport. Last summer, he was brought to Georgia by the legendary Dirk Nowitzki, who toured the country and met with the children.

Among other things, Nowitzki met with the students of the Academy the name of Zaza Pachulia (center founded it and named in his honor, and a Playground in his district) and shared their experiences.

The meeting was held in question-answer and lasted about an hour. Dirk the best European player in NBA history. Just like in a small country like Georgia it would not go. The visit was made possible thanks to the enormous prestige of Pachulia in the NBA. Zaza played with Nowitzki in Dallas for only one season, but that didn’t stop him from getting a with the legend of a good relationship.

Congrats on retirement brother and THANK YOU for what you’ve done for this game. Now you’ll have time to visit me in Georgia😉🇬🇪 #Legend #NBAChamp #FinalsMVP #MVP #14XAll-Star #6thAllTimeScoringLeader #21Seasons #12XAllNBA

A gas explosion in a residential house in the Didi Dighomi district on the outskirts of Tbilisi in January 2019, has claimed the lives of four people. Many people temporarily left without shelter. Came to the aid of Zaza, which was organized for them temporary shelter in the rooms of hotel type with the Academy. Pachulia — man-block for Georgia. Of its significance for compatriots is the fact that the NBA has changed the rules because of Zaza. Georgia is home to less than 4 million people, but the people of the country are so actively voted for Pachulia in determining the participants of the all-star game that there was a real likelihood of a travel center in the event the best of the best.

Zaza is clearly not up to top level (6.8 points and 5.8 rebounds for his career in the League). The NBA did the following: the voting was only 50% influence on the definition of the composition on the all-star game. The remaining 50% are given by the voices of the journalists and players who weed out players like Pachulia.

“I am very proud of the fact that forced the NBA to change the rules. Honestly, I got an excessive number of votes from Georgia. I am most proud of the fact. I am a realist and understand that I am not a player at the all-star game. While all of this is me really not interested — I am proud and happy because the NBA changes the rules for me and my fans. We are talking about more than 1.5 million votes. I just get pleasure from this amount of love and support, it does not agitate people in Georgia to vote for me. Everything was done naturally,” said pachulia.

Pachulia is a player remembered by most fans of the NBA as a dirty contractor. You can argue with the intentionally rude actions of Zaza, but definitely a true one fact remains: pachulia is a great man outside the court. Of basketball he had not gone — works in “the Golden state” and helps to develop the sport in Georgia. Pachulia also has more time to devote to the family. Zaza lives in a happy marriage with the TIKA Alavidze and raising two sons, Davit and Saba, and a daughter Mariam. In 2018, the Zaza was born the fourth child — a daughter, whose name did not disclose. It is possible that the sons follow in the footsteps of his father. The propensity to basketball they clearly have, judging by the pairs of pages in social networks.