HomeHockeyWhy Dynamo did not need to look for a new coach. Screamers deserve a chance to realize the dream

Why Dynamo did not need to look for a new coach. Screamers deserve a chance to realize the dream 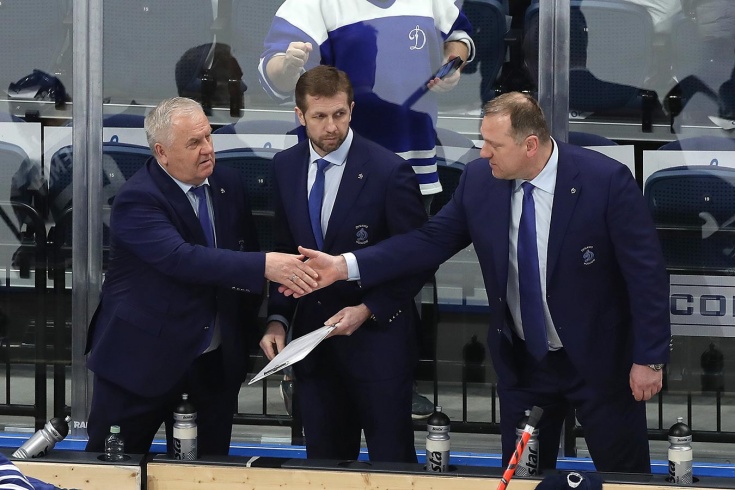 Early final season of the KHL

24 Mar Continental hockey League took the decision on early completion of the season 2019/2020. The decision of the organization was due to the negative development of the epidemiological situation in the world. Thus, the season ended for all teams in the League, including for Moscow “Dynamo”.

In the first round of the playoffs, the blue and white broke the resistance of the rivals of Spartak Moscow (4-2). In the semi-finals of the Gagarin Cup in the Western conference, the team of Vladimir Krikunova was supposed to play with CSKA. Unfortunately for all hockey fans, for all the known reasons for this proposal and will remain so forever in the subjunctive mood.

After the decision on the conclusion of the season, in fact, has already begun the offseason. Traditionally, this time will not be easy for Moscow “Dynamo”. The club will have to answer a number of questions, including the question of the expediency of continuing cooperation with the coaching staff of Vladimir Krikunova.

Last season for Muscovites was like a roller coaster, where the fall alternated with UPS. At the start of the championship fever all Dynamo. In the game the blue and white was no stability, and striking matches alternated with failure. The head coach of Muscovites was under huge pressure, and everybody was talking about the fact that the days of Krikunova to the coaching staff “Dynamo” are numbered. At some point in the season it seemed that the retired 69-year-old specialist is inevitable. Bosses of blue and white did not hesitate openly to hint at possible developments.

However, in the fall of Krikunova has managed to keep the position, and hardly any of the representatives of the “Dynamo” regretted this decision. An experienced coach has managed to normalize the situation in the dressing room and on the ice. Blue and white straightened the standings and have successfully completed the regular season, and then in the vivid series of the playoffs outplayed “Spartak”.

“Hockey without spectators isn’t hockey. To sum up before, but I think that this season Dynamo can bring itself into an asset, especially in the first round of the playoffs was defeated most basic rival – Moscow “Spartak”, — said General Director of “Dynamo” Yevgeny Krovopuskov.

Hand on heart, we have to admit that Dynamo is unlikely to impose the current holder of the Gagarin Cup fight in the second round of the playoffs. That’s just it, nobody knows and can check. The Cup championship has always been a litmus test, by which one could judge the potential of the team and its prospects for the next season. Now, however, club managers have to operate in conditions of non-obviousness. And Dynamo it concerns in the first place.

What to do with the coaching staff? At it is white-blue there are three possible answers, which lie on the surface. To provide a new opportunity Krikunova, to trust a young professional (conditional actions) or to look at zinatulla Bilyaletdinov, who has not officially announced his retirement. Frankly, the summer in the place of management of “Dynamo” I would not change anything.

Krikunov have returned to the Moscow club in October 2018, and during this time deserve only words of praise in his address. First, Vladimir pulled the blue and white in the playoffs in a season when they could drive past the Cup showdown. And then taught a master class to young coaches how to work in a situation when you are ready to fire at any moment. Humanly, 69-year-old coach has earned a real chance to compete for the Gagarin Cup.

Next season the KHL can get special, so should be the first after the introduction of the League’s hard salary cap. Many clubs have already faced the problem of how to put an existing part in the salary limit. For example, Magnitogorsk “the Metallurgist” spends sequestration payroll, and the first victim has become the best sniper in the history of Russian Championships Sergey mozyakin.

Dynamo such problems do not arise. The contract is the main star of the club Vadim Shipachev will be valid for one season. A month ago, on reasonable terms has been resigned the agreement with the defender of the first pair Juuso Hietanen. Can stay in the camp of blue and white and Dmitry Yashkin. Czech striker continues to choose between the offer of “Dynamo” and one of the NHL clubs, and at the moment nobody knows what the solution eventually it will take. The agreement expires and andré Petersson, but the white-blue plan to meet the financial demands of the player.

Possible loss yashkina will not be fatal to the Moscow club, because the light wedge on Dmitri did not agree. According to the “Championship” in the summer in the Moscow club will make every effort to return from St Petersburg by Dmitry Kagarlitsky. The Russian striker has failed to SKA, but in conjunction with Vadim shipachyov may return to the level of season 2018/2019. We immediately note that the picture at the same time yashkina and Kagarlitsky in “Dynamo” at the moment it seems fantastic.

Goal for the offseason is to find a second center, not the head coach

The main issue is white-blue on the market free and not entirely free agents will search a Central striker in the second link. This season the link Sipacheva desperately lacked the support of the second link. The acquisition of winger Teemu of Pulkkinen has not solved all problems, as Igor polygalov is not legitimate center top-6. Polygalov would be the ideal option in the third link, but the second Dynamo need a more creative center.

Legionary on the place of Michal czajkowski Dynamo also need to find a more reliable option. Slovak defender too keen on the free connection in the attack, which often resulted in big problems for the team. If managers will be able to hold a good selection of the Dynamo are all cause for great hopes for the upcoming season. In this situation, wasted on the search for a new coach who will need time to establish contact with the team, it would be ridiculous. Screamers are repeatedly told about the dream to finish his career by winning medals. Well, working in “Dinamo” he deserved this chance.