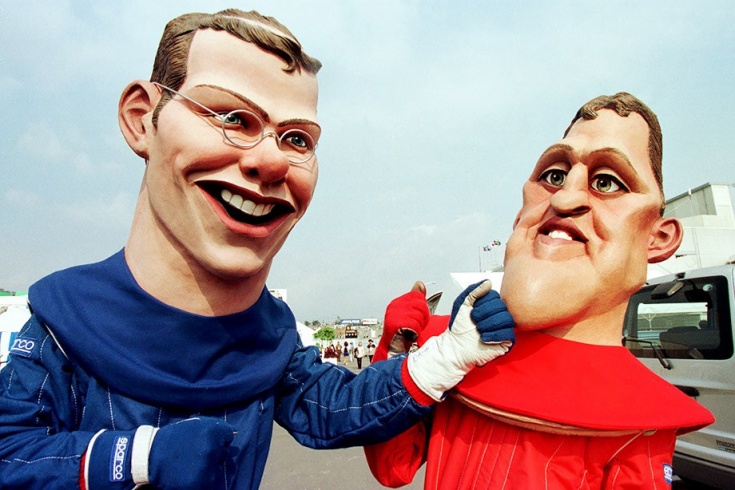 We’ve chosen a provocative and attractive title that you clicked. But not a drop of lie in the material there: nothing better since 1992, when the Formula-1 began to broadcast in Russia, you have not seen. And indeed the season-97 – decoration formulaic story. Now we can easily prove that.

Who is the last to win?

In 2017 all ready to enjoy that Ferrari started to compete with Mercedes, and their dispute occasionally chimes in “Red bull”. Some even enthusiastically called the current championship “classic”. Excuse me, but what of the great 1997?

Yes, there for the championship, too, fought only two riders, but neither of which the dominance of Williams and Ferrari was out of the question. Regularly on the first role came “McLaren”, but often the lead of Hakkinen and Coulthard ended with a fire powerful, but terribly unreliable motors Mercedes. And yet the team of Ron Dennis deservedly picked up three wins.

Until his crash in Montreal nerves ruffled Schumacher and Villeneuve , Olivier Panis on “Proste” (ex-“Ligier”), consistently come to the podium thanks to decent equipment and tires Bridgestone. From time to time reminded of past greatness, “Benetton”, in menacing form had a “Jordan” with a young Fisichella and Schumacher Jr. Could shoot “Arrows” and “Stuart,” not hopeless look, and “Zauber”. Four teams have won races, three more were close to it, and on pure speed, and not due to chance — a great result!

In our day we talk, one of the favorites of the track better. Lucky is targeting a double victory, less successful rival, just on the top 3. 1997-d will laugh at such “diversity” of the results: for the entire year Villeneuve and Schumacher never together not made it to the podium! Yes, not without stupid mistakes and offensive technical descents, three times they were first and fourth, but fact is fact.

From the road to the track the results were varied, as if someone took the cubes with the names of the racers and threw them in a random order, bringing forward new characters and sending into the abyss of the recent lucky winners.

When the fans ask what they would like to return to Formula 1, the popular two answers: refueling and competition tire manufacturers. In 1997 it was both. And a tire war between “Godjira” and “Bridgestone” was that necessary! The dominators of f-1 from “Goodyear” overgrown Zhirkov, calmed down and was quite surprised when Bridgestone began to fight, even without the top teams.

On some tracks the Japanese tyres were particularly good, but the “Goodyear” was famous for the fact that often supplied faulty sets of tires, because of which the pilots had to go to extra pit stops. Then you and the maximum variety of results, and unexpected rearrangement during the race — what could be better for the fan. Of course, if the defective set was not your favorite pilot. Looking ahead: after a year, “Goodyear” will be defeated and will leave the Formula 1. A symbol of care will be torn on “Suzuka” tire on the car of Schumacher.

“Arrows” under the direction of Damon hill suddenly turned into the best car of the peloton and drove the champion-96 to victory, till before the finish is not stuck in third gear.

We all love beautiful or shocking story in 1997, they were as much as you want. Take, for example, the last in the career of victory by Gerhard Berger. The Austrian missed a few races due to illness, at this moment his father died, and on the track, Gerhard adequately replaced Alex Wurz, which led to questions as to whether Berger to return? The current head of DTM, responded to this dominant victory at Hockenheim.

Everyone remembers the Grand Prix of Hungary, when the “Arrows” running Damon hill suddenly turned into the best car of the peloton and drove the champion-96 to victory, till before the finish is not stuck in third gear due to hydraulic failure. And yet it was incredible, totally unexpected podium.

How about a stage on the “nürburgring” when Ralf Schumacher at the start knocked out of the race brother?! Here’s the story: it seemed that the brother had deprived Michael of all chances for the title, because two Grand Prix from the finish, Schumacher-the senior has now conceded Villeneuve 9 points. Who would have thought that before the finale to lead the championship will be exactly the Red Baron. 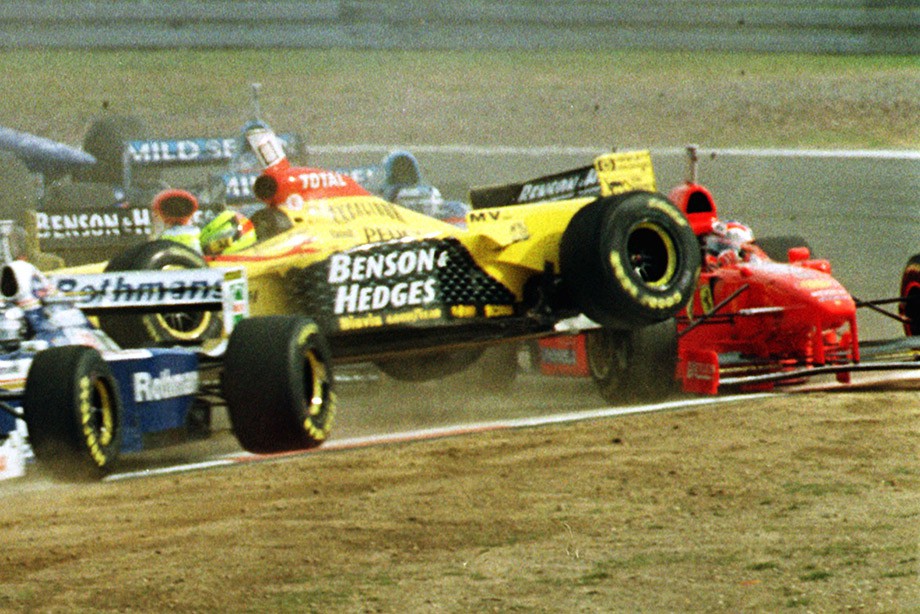 We could still remember the phenomenal dominance of Schumacher in Monaco, Villeneuve’s win in Argentina against the background of health problems, physically fight for victory in Germany, accident Panis in Canada, leadership Trulli in Austria, the controversial disqualification of Villeneuve and Irvine leads workshops in Japan, the collapse of “Lola”, which the sponsor was forced to make his debut in Formula 1 a year earlier and then dumped after the first disastrous race… Well, you understand: it was the season-yum.

This year couldn’t have ended kind of corny, isn’t it? Grand Prix of Europe brought us the clash in the title race — and what is the upshot in the race could be cooler? “The villain” gets stuck in the gravel, while his opponent gets to the finish and become the champion. The subsequent deprivation of Schumacher of all points for the season — small farce, the appearance of a severe punishment, has in no way influenced the epic end of the season.

To this end also was the first career win for Hakkinen (hinting at a scenario next season), the fourth starting position of the hill and the final race “Williams” in the famous colors “Rothmans”. And yet — the recent success of the Renault before leaving for a few years and the final Grand Prix under the old rules of Formula 1. Then the championship was waiting for a more narrow car and the ugly grooves on the wheels. But that’s another story, 26 October 1997, we closed in Jerez stunning championship.

LeClair missed out on the victory, Vettel spun in the first race. How was the race weekend

“Williams” surpassed Ferrari, Grosjean and Marcus sat behind the wheel. The results of the racing weekend